Rare $99 dime variety may be worth thousands 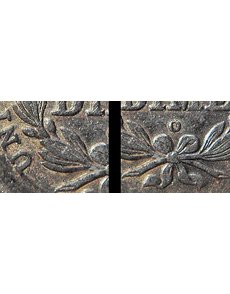 The 1841-O Seated Liberty, Small O, Closed Bud dime earned its attribution from the closed buds on the wreath and the size of the O Mint mark.

All images courtesy of Max Lebow. 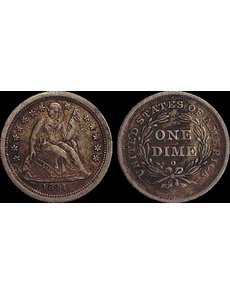 Here, the 1841-O Seated Liberty, Small O, Closed Bud dime still exhibits evidence of grime and verdigris after having been subjected to initial rinsing in tap water and immersion in acetone before rinsing again and patting dry. Owner Max Lebow then immersed the coin in olive oil, which caused the surface encrustations to lift off the coin in a sheet, and followed up with a final rinse. 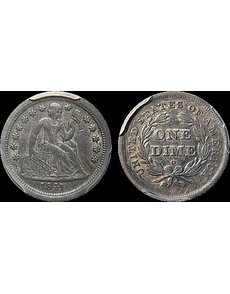 The dime for which Max Lebow paid $99 for on eBay several months ago is encapsulated PCGS Extremely Fine 40, with experts estimating the coin’s worth at between $10,000 and $15,000. The coin was submitted to the grading service after final immersion in olive oil to remove remaining surface encrustation, followed by a tap water rinse and patting dry.
Previous
Next

??An 1873 Seated Liberty, With Arrows, Doubled Die Obverse dime, Fortin 103. The coin was offered on a dealer’s website and encapsulated by Numismatic Guaranty Corp. with a grade of About Uncirculated 53. Lebow bought it for $135 and crossed it over into a PCGS AU-50 holder. Its estimated value is $2,000.

??An 1872 Seated Liberty, Doubled Die Reverse dime, Fortin 105. Purchased at auction for $300 housed in an NGC holder and graded Mint State 63, the coin was crossed over into a PCGS MS-63 holder. The coin is currently valued at approximately $1,800.

??An 1874 Seated Liberty, With Arrows, Missing Right Arrow dime, Fortin 114. Purchased on eBay for $50. Certified PCGS Very Fine 25 and stickered by Certified Acceptance Corp. Fortin estimates the coin’s current value at between $400 and $500.

??An 1890-S Seated Liberty dime, Fortin 112, obverse scratch, PCGS Genuine. Only the third example known of this variety. Cherrypicked on eBay early in 2012 for $85. Fortin estimates the variety’s current value at $1,500.

And Lebow says he’s comfortable having it remain that way. ¦