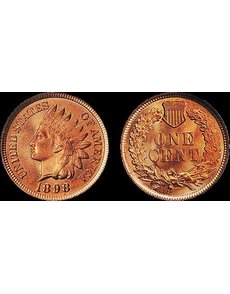 In 1898, the Indian Head cent was essential in daily commerce because of the practice of 99-cent odd pricing.

Recently, Dennis Tucker, publisher at Whitman Publishing LLC, sent me an article one of his friends had written. The subject was 99-cent pricing and other such odd numbers. The article had several theories, none of which I think are the main factor.

I have always been interested in 99-cent pricing and have read about it extensively. Most often, 99 cents is preceded by a digit, although one can find prices of just 99 cents. For prices above a few dollars, 95 cents seems to be standard. Charles Anderson, a principal of Whitman and who has had much experience, says that, for example, $4.95 — an odd price for a book — attracts many more people than does $5, and $19.95 attracts more people than does $20. Go to a Barnes & Noble or Books-A-Million, and you will find a lot of $19.95 books but, I dare say, none at $20.05 or $20.50.

Back to 99-cent pricing. In my opinion, not mentioned in the article that Dennis sent, is that a buyer thinks that a price such as $1.99 is for an item in the “$1 range.” On the other hand, an item priced at $2 is an item in the “$2 range” even though it cost just one cent more. I believe this “range” concept is more important than anything else.

“The craze for 49-cent and 99-cent bargains requires a great many pennies in the way of change, and it is no unusual thing for the big department stores to take $10,000 worth at a time. Most of these come back to us by the way of the slot machines, which have come to be wonderful in number and variety,” according to an article in the Feb. 3, 1898, edition of the Trenton Evening Times in New Jersey.

The more things change the more they stay the same, as they say.