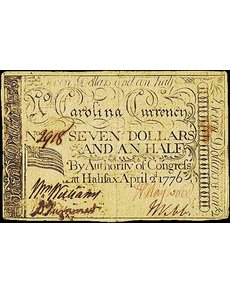 Where in the realm of Colonial numismatics can you find a squirrel eating a nut, a cock fight, a merman, a coiled rattlesnake and even a sea urchin?

All of these appear on one extensive series of notes issued by North Carolina’s Fourth Provincial Congress in April 1776.

The Congress’ April meeting is best known for passing the Halifax Resolves of April 12, 1776, the first state-sponsored document recommending independence for the American Colonies. However, just over a week later, on April 22, and during a busy session that created new militia units to protect North Carolina from both invading Redcoats and domestic Loyalists, the Fourth North Carolina Provincial Congress authorized its first large scale issuance of paper money (dated April 2, 1776). The previous year’s Provincial Congress at Hillsborough had authorized £125,000 worth of currency, but the Halifax Congress of 1776 authorized 10 times that number: $1,250,000.

The plates were engraved in Baltimore by Gabriel Lewyn, a jeweler and silversmith who also happened to regulate gold coins in this era. Though just one Gabriel Lewyn-regulated gold coin is known (a Brazilian 6,400-real piece that was discovered with a metal detector in southeast Georgia), the paper money he printed is widely available. Some even include a monogram of his initials, a situation rather like the TS signature of Thomas Sparrow on Maryland currency of this era.

Though it’s fun to see animals like alligators, beavers, goats, bees, barracudas and more on Colonial currency, the most historically significant of the vignettes on the April 1776 North Carolina notes is on the $7½ note: the first appearance of an American flag on paper money. With a British Union Jack in the canton and 13 red and white stripes, the flag has been called the Continental Colors and the Grand Union Flag, among other monikers. It was first flown aboard John Paul Jones’ ship USS Alfred in 1775.

As for the sea urchin vignette on one of the $1/4 varieties, that was not only the first appearance of an echinoderm on American paper money, but also the last.