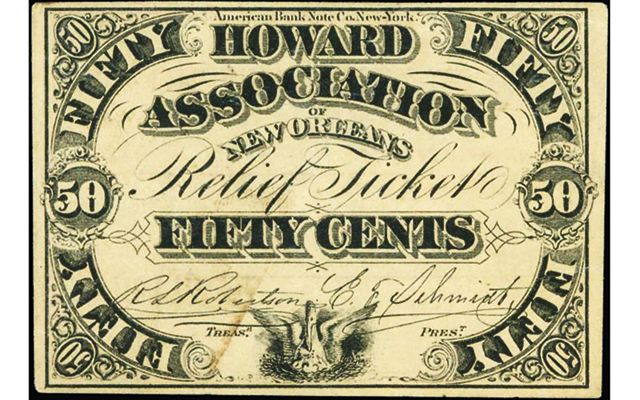 Small, unissued relief ticket is a tangible reminder of when local volunteer organizations were vital to help victims of yellow fever epidemics of the 1800s.

A small, undated square piece of paper offers a tangible reminder of the 1800s when yellow fever epidemics were common in the United States.

An unissued 50-cent relief ticket for the Howard Association of New Orleans, graded by PCGS Currency as About New 53 Premium Paper Quality, is offered in the June 26 to 27 Stack’s Bowers Galleries auction during the Whitman Baltimore Summer Expo at the Baltimore Convention Center.

The face has intricate engraving around the edges along with both text and numerals indicating the denomination. American Bank Note Co. in New York printed the piece.

R.S. Robertson signed the note as treasurer and E.G. Schmidt signed it as president of the volunteer relief organization. Although the ticket is undated, the note can be dated: Schmidt and Robertson served as officers of the association in 1873, according to Jewell’s Crescent City, Illustrated – The Commercial, Social, Political and General History of New Orleans by Edwin Lewis Jewell.

In New Orleans in 1837, Farquhar Mathewson, aged around 22 or 23, organized a group of young men to provide relief to the victims of the epidemic. They were the first members of the Howard Association of New Orleans.

According to records kept by the association, during the epidemic of 1853 it disbursed more than $150,000 to 11,000 sick and destitute individuals.

The association takes its name from John Howard, a British philanthropist and prison reformer. The first Howard Association in the United States was established in 1812 in Boston as a way to supply medicine, food and burial for victims of yellow fever epidemics there. Other Howard Associations were established in many cities along the East Coast. These organizations provided local emergency relief long before the formation of the American Red Cross in 1881.