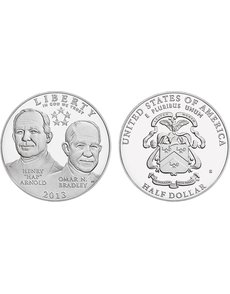 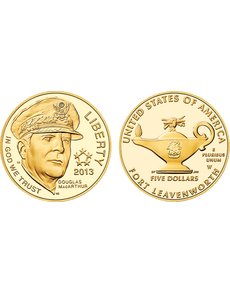 Gen. Douglas MacArthur is depicted on the gold half eagle obverse. 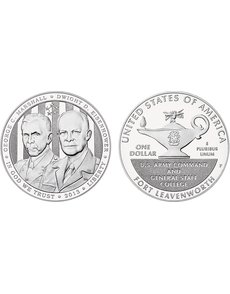 The copper-nickel clad half dollar, the silver dollar and the gold $5 half eagle that together comprise the 2013 5-Star Generals Commemorative Coin Program go on sale from the U.S. Mint at noon Eastern Time March 21.

Pricing has been announced for all single-coin options except the Proof and Uncirculated half eagles. Pricing also had not been released for the three-coin Proof set, which includes the Proof half eagle. The three-coin Proof set is limited to a release of 10,000 sets.
The Mint will announce the prices for gold options on March 20.
The enabling legislation, Public Law 111-262, authorizes the production and release in Proof and Uncirculated versions of up to 100,000 half eagles, 500,000 dollars and 750,000 half dollars.
The purchase prices of each half eagle, dollar and half dollar will include a surcharge, respectively, of $35, $10 and $5. Net surcharges, after the Mint recoups all production costs, are to be paid to the Command and General Staff College Foundation to help finance its support of the United States Army Command and General Staff College in Fort Leavenworth, Kan.
The coins recognize five U.S. Army generals who had five stars — George Marshall, Douglas MacArthur, Dwight Eisenhower, Henry Arnold and Omar Bradley — all alumni of the college.
The half eagle obverse, designed by Ronald D. Sanders, an associate designer with the U.S. Mint’s Artistic Infusion Program, and sculptured by U.S. Mint Medallic Sculptor Michael Gaudioso, features a portrait of MacArthur with the five-star insignia on the right side of the design.
The reverse, designed by AIP Master Designer Barbara Fox and sculptured by U.S. Mint Medallic Sculptor Joseph F. Menna, features the Leavenworth Lamp, the symbol of the college.
On the dollar obverse, portraits of Marshall and Eisenhower are featured against a striped background, with the five-star insignia above their heads. It was designed by AIP Master Designer Richard Masters and sculptured by Menna.
The dollar’s reverse, designed by Fox and sculptured by Menna, depicts what is called the Leavenworth Lamp, with Fort Leavenworth’s heraldic crest appearing on the lamp’s side.
U.S. Mint Medallic Sculptor Phebe Hemphill designed and sculptured the half dollar obverse. Hemphill’s design features portraits of Arnold and Bradley with the five-star insignia above their heads. Hemphill also designed and sculptured the half dollar’s reverse. It features the heraldic crest of Fort Leavenworth.
The Proof half eagle is being struck at the West Point Mint. The Uncirculated version is being struck at the Philadelphia Mint.
The Proof dollar is being struck at the Philadelphia Mint; the Uncirculated dollar is being struck at West Point.
The Proof half dollar is being struck at the San Francisco Mint. The Uncirculated version is being struck at the Denver Mint.
An introductory sales period runs from noon Eastern Time March 21, through 5 p.m. April 19, after which regular issue prices will be in effect.
The following prices will be charged, with introductory prices first, followed by the regular issue prices in parentheses:
??Single Proof silver dollar — $54.95 ($59.95).
??Single Uncirculated silver dollar — $50.95 ($55.95).
??Single Proof copper-nickel clad half dollar — $17.95 ($21.95).
??Single Uncirculated copper-nickel clad half dollar — $16.95 ($20.95).
Orders may be placed via the U.S. Mint website, www.usmint.gov, or by telephone at 800-872-6468.