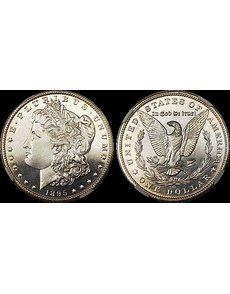 The Long Beach Coin, Stamps and Sports Collectible Expo continues to make improvements that have made this thrice-yearly show increasingly relevant to collectors and dealers alike.

While not directly related to rare coins, these stars help bring new people to the bourse floor who may end up buying coins.

The show featured official auctions by Heritage, with pre-show auctions in the Los Angeles area by Larry & Ira Goldberg, June 2 to 5, and Bonhams on June 3.

In total the three auction houses brought more than $26 million in coins to market before and during the Long Beach Expo.

This Branch Mint Proof issue was unknown for decades, and contemporary New Orleans Mint records recording its production as a Proof are lacking. The catalog notes that it was struck from circulation dies (rather than specially prepared Proof dies) but that the characteristics on the piece are “roughly equivalent” to what may be found on Philadelphia Mint Proof Morgan dollars of the same era.

Although the piece lacked the squared rims that numismatists often associate with Proof coins of the era, the description noted, “The lack of squared rims was certainly not from a lack of striking pressure, though. Unlike most 1895-O dollars, which are poorly struck, this piece has an absolutely full strike.”

Bidders clearly agreed on the coin’s quality and it sold for an especially hearty $528,750. It was last offered at Stack’s Bowers Galleries’ Aug. 18, 2011, American Numismatic Association convention auction where it was described as “a landmark unto itself” but did not meet its reserve.

Highlights of Goldberg’s auction included an 1893-S Morgan dollar graded Mint State 60 by Professional Coin Grading Service that brought $115,000 and a “Zerbe” Proof 1921 Morgan dollar graded Proof 67 by NGC and described as, “Irrefutably one of the most extraordinary survivors of this mysterious presentation issue.” It brought $52,900. ¦