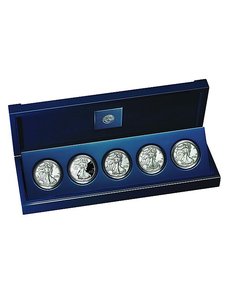 All five coins for the set will be mounted in one custom-designed, highly polished, lacquered hardwood presentation case, accompanied by a certificate of authenticity. 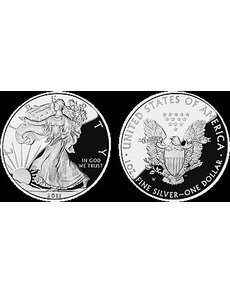 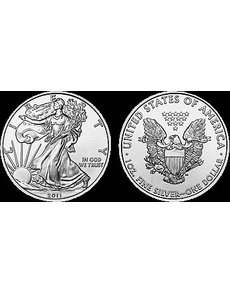 Although the 2011 American Eagle silver bullion coin in the set was struck at the San Francisco Mint, the coin bears no Mint mark designating its facility of production. 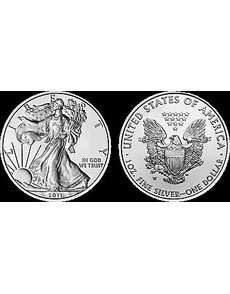 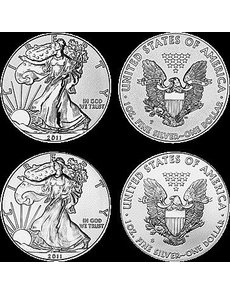 Production for the maximum mintage of 100,000 five-coin 25th Anniversary Silver sets, which include a Reverse Proof coin, has been completed, with the San Francisco Mint expected to assemble the coins — already placed in plastic capsules — into sets beginning at the end of October. Shipping of the sets is expected to begin in late November.

No pricing information had been released as of Oct. 14. The U.S. Mint will impose an ordering limit of five sets per household.

(An in-depth examination of the American Eagle silver dollar will appear in the Nov. 7 Coin World Special Edition.)

Tom Jurkowsky, director of the U.S. Mint’s Office of Public Affairs, said Oct. 12 that the production of the coins at the West Point Mint in New York, the San Francisco Mint and the Philadelphia Mint was sufficient to satisfy the maximum release of 100,000 sets.

? One Reverse Proof 2011-P coin struck at the Philadelphia Mint with the P Mint mark. It is not available singly. The coin will feature a frosted background with polished, mirrorlike design elements and foreground. It will carry the same finish that was used for the Reverse Proof coins in the three-coin 1-ounce gold and silver American Eagle 20th Anniversary sets in 2006, and in the two-coin 10th Anniversary platinum set in 2007. The 2011-P coins were struck in late August and September.

? One Uncirculated 2011-S coin struck with the S Mint mark of the San Francisco Mint, exhibiting the finish introduced in 2006 and called “Burnished Uncirculated” by hobbyists. This coin will not be available singly. The pieces were struck in September and October.

? One Uncirculated 2011-W coin struck at the West Point Mint bearing the same finish as used on the Uncirculated San Francisco Mint strikes. It is identical to the coin already being offered singly. Coins for the set were struck in late August and September.

? One bullion coin struck without a Mint mark at the San Francisco Mint, identical to all of the other 2011 bullion coins. When U.S. Mint Deputy Director Richard Peterson announced the set during an Aug. 19 collector forum at the American Numismatic Association’s World’s Fair of Money in Rosemont, Ill., he said that the bullion version would be struck at either the West Point or San Francisco Mint, with no designation made identifying the Mint facility producing the bullion version in the set.

Jurkowsky said Oct. 12 that to achieve the finishes on the Reverse Proof version, “The entire die face is brilliantly polished using hand and auto-polishing techniques, the flat field area on the die is then textured using a laser finishing system and the detail and artwork remain polished. The dies are then coated with chrome-nitride that is applied using a physical vapor deposition process.”

All five coins for the American Eagle 25th Anniversary Silver Coin set will be mounted in one custom-designed, highly polished, lacquered hardwood presentation case accompanied by a certificate of authenticity.

As with all products containing precious metals, pricing will be set as close as possible to the release date and is subject to change throughout the life of the program.

The American Eagle silver bullion coin was introduced in November 1986. ¦