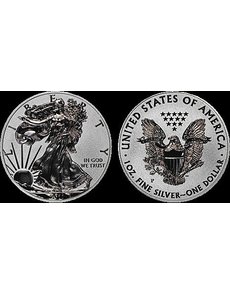 Now that the first collectors and speculators are receiving in hand their five-coin 2011 American Eagle 25th Anniversary Silver Coin sets, the secondary market is showing its first completed sales as well.

The sets were offered for sale by the U.S. Mint at noon Eastern Time on Oct. 27 at $299.95 with a household limit of five sets. Many collectors battled for hours with the Mint’s website and telephone lines to secure their sets — some engaging the help of relatives, co-workers or friends — and the 100,000 sets sold out after less than five hours.

In the past few weeks, many buyers have been disappointed as the Mint has canceled orders for various reasons, both annoying collectors and fueling a secondary market marked by scarcity as marketers struggle to gather significant quantities of the sets.

For a read on the secondary market, looking at online auctions like eBay provides instant gratification.

Unopened sets are selling for as much as $850 individually as of Nov. 15, or $4,000 when offered in sealed five-set boxes as shipped by the Mint. More than 100 sealed five-set packages sold for between $3,600 and $3,900 on eBay during the first week of sales. These prices are comparable to what’s being paid in the dealer-to-dealer wholesale market.

Just a week earlier, as the first sets arrived in people’s mail boxes, the going rate was $600 a set.

Unopened boxes are receiving a $25 to $75 premium over opened boxes, as dealers assume that the opened boxes have been already pre-screened for MS-70 and Proof 70 coins.

It is unknown if these premiums will last and if the five-coin set price will stay at the $700 to $800 level, or if it will stabilize to something more attainable for average collectors who were unlucky in their attempt to secure sets directly from the Mint. ¦