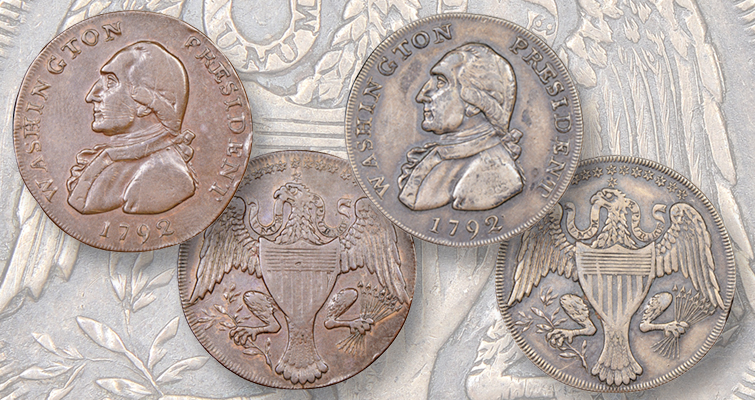 A bronze 1792 George Washington cent pattern brought $36,000, while a silver pattern for a proposed half dollar brought $204,000 at Heritage’s Newman XI auction. Both are attributed to Jacob Perkins and are considered patterns for a proposed coinage contract that did not come to fruition. 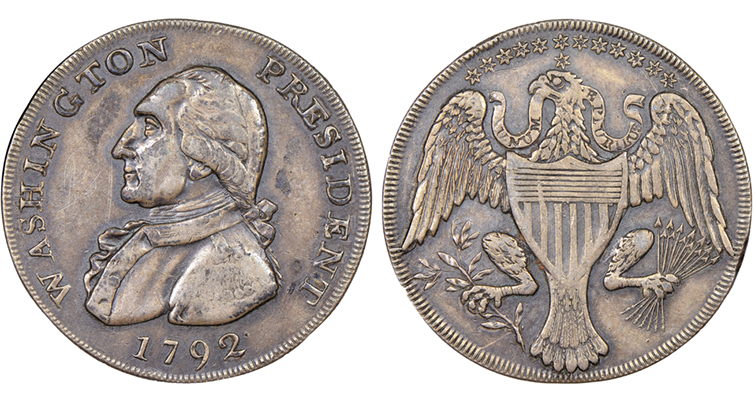 Newman's 1792 George Washington silver half dollar pattern, graded Extremely Fine Details, Obverse Graffiti by NGC brought $204,000 in its first known auction appearance. Heritage observes “a few faint pinscratches on Washington’s portrait and what appears to be a crude letter ‘D’ in the left adjacent field. ...The edge lettering is clear." The coin is attributed to Massachusetts engraver Jacob Perkins. 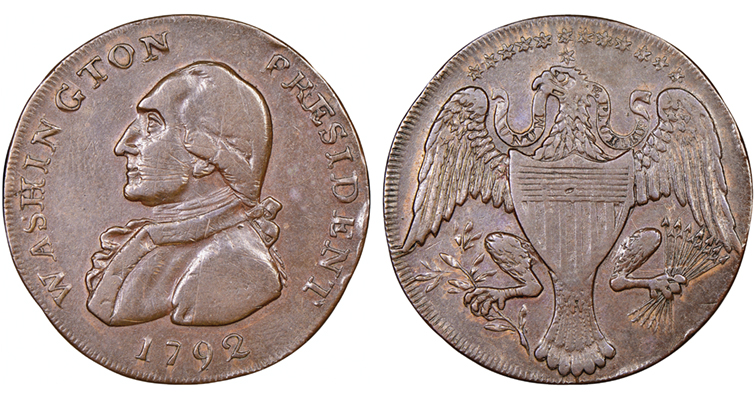 A similarly designed bronze 1792 Washington pattern cent, graded NGC Extremely Fine Details, Scratched, brought $36,000 at the auction. Heritage noted that the 1792 Washington President, Large Eagle patterns are attributed to Perkins, who is believed to have struck a small number in copper, silver, and gold, in an effort to secure a coinage contract. 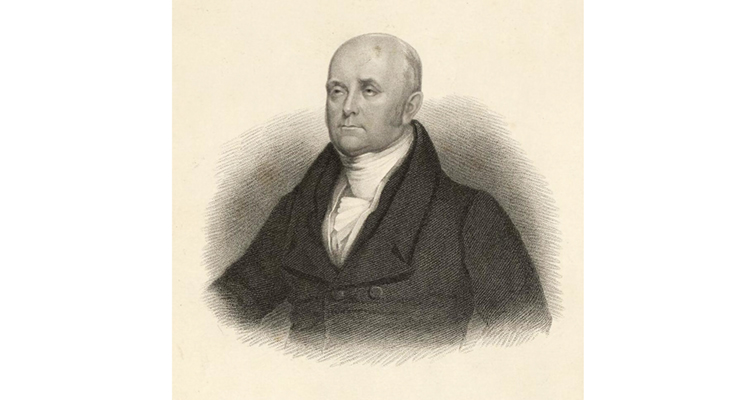 American inventor Jacob Perkins is depicted in an 1826 lithograph. 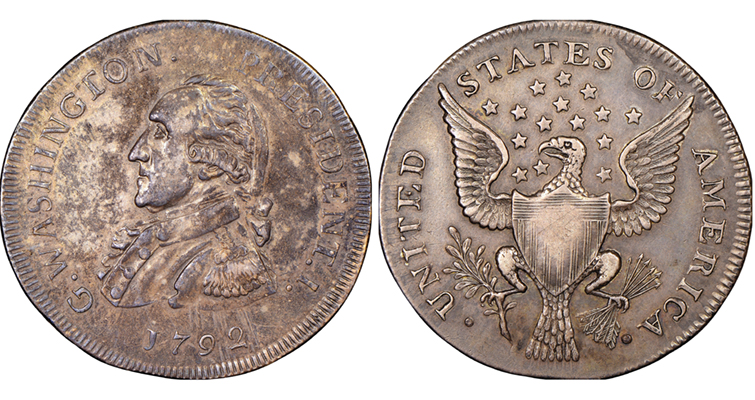 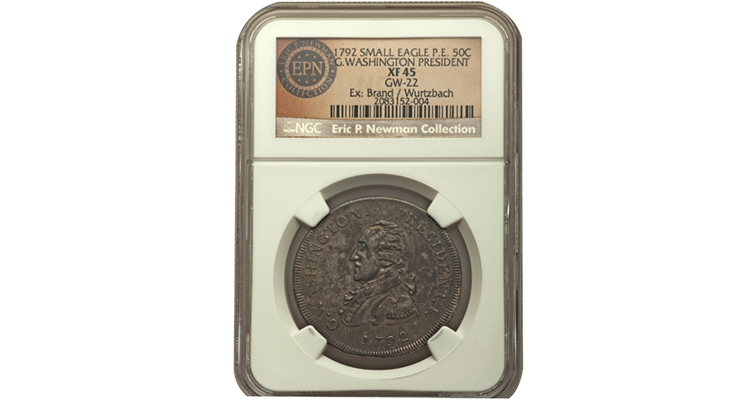 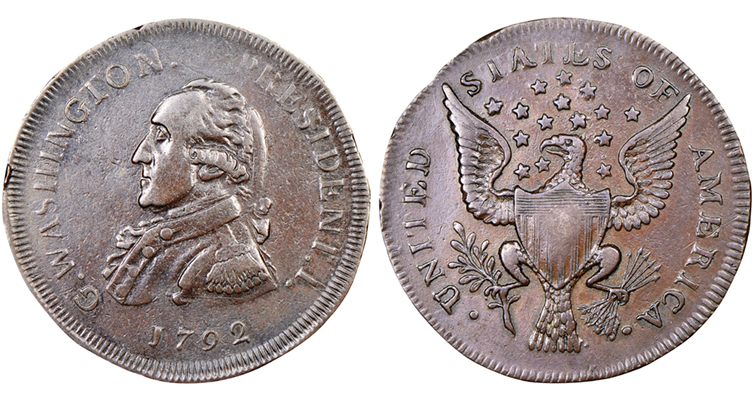 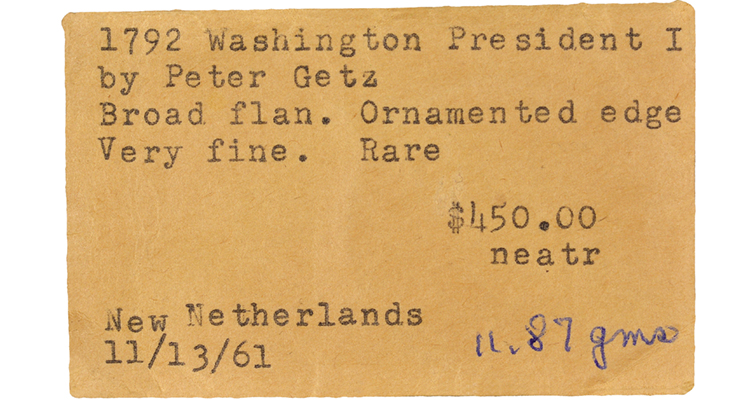 The envelope that the 1792 Getz cent pattern was at one time kept in reveals the coin's 1961 value. 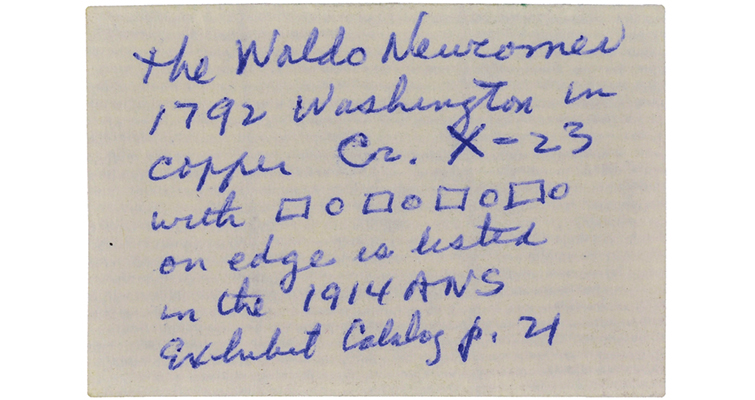 A label kept with the envelope for the 1792 Getz cent pattern describes the circles and squares decorating the coin's edge.

Heritage concluded its auctions of the Eric P. Newman Collection in Dallas on Nov. 7, bringing the total for the 11 Newman auctions — which started in 2013 — to just nearly $77 million.

Topping the 103-lot Newman XI coin-focused auction Nov. 7 was a 1792 George Washington silver half dollar pattern, graded Extremely Fine Details, Obverse Graffiti by Numismatic Guaranty Corp. that brought $204,000 in its first known auction appearance. It is one of just five known examples of this rare and desirable Washington issue, of which two are in museum collections and as such, uncollectible. The offered piece carries a lettered edge, although it is doubtful that plain edge examples were struck.

On the damage and the overall appearance, Heritage observes “a few faint pinscratches on Washington’s portrait and what appears to be a crude letter ‘D’ in the left adjacent field. However, these are virtually undetectable by the naked eye. The toned olive-gray and gunmetal-blue surfaces deliver an old-silver appearance, and the design elements exhibit little wear. The edge lettering is clear.”

As Heritage writes of a similarly designed bronze 1792 Washington pattern cent, graded NGC Extremely Fine Details, Scratched, that brought $36,000 at the auction, “The 1792 Washington President, Large Eagle patterns are attributed to Newburyport, Massachusetts, engraver and inventor Jacob Perkins. Perkins is believed to have struck a small number of patterns in 1792, in copper, silver, and gold, in an effort to secure a coinage contract from the newly formed United States government.”

An example struck in gold, graded NGC EF-45 ?, realized $1.74 million at this summer’s August American Numismatic Association World’s Fair of Money auction. It was Newman’s favorite piece in his collection and Newman believed it was struck for, presented to, and carried by the first president as a pocket piece. Heritage called it “an enigmatic symbol of the politically charged evolution of America’s coinage system and the dilemma faced by George Washington as he deftly led the new nation through its formative years.”

Another top lot in the final sale was a 1792 Getz silver pattern half dollar with the Small Eagle reverse and a plain edge. George Fuld’s book The Washington Pattern Coinage of Peter Getz listed just 22 known examples struck in silver of which seven are in museums. The coin offered in the auction was exhibited at the 1914 American Numismatic Society “Exhibition of U.S. and Colonial Coins” in New York City and in contrast to many known examples, it has no evidence of being struck on a previously struck coin.

The dies were engraved by Peter Getz of Lancaster, Pennsylvania, for a proposed half dollar and cent coinage that would be struck under private contract.

The Philadelphia Mint’s initial production of half dismes in 1792 followed by half cent and cent production in 1793 thwarted this plan, and today the issues are known as Getz patterns and listed on Page 94 of the 2019 “Red Book.”

As in the previous auctions, the sales benefited the Eric P. Newman Numismatic Education Society to support scholarly numismatic research efforts and for the benefit of other nonprofits.

Five Newman lots have sold for over $1 million, led by the gold 1792 Washington pattern. Back in November 2013 at the second Newman auction a 1796 Draped Bust quarter dollar graded MS-67+ ? realized $1,527,500. As catalog editors Stuart and Maureen Levine wrote in an appreciation in the catalog, “We continue to be awestruck by Eric’s eclectic collection, scholarly research, numismatic writings, and generous spirit.”

Editor’s note: The total prices realized figure in the original version of the article was updated with new information. 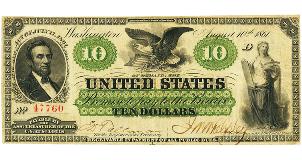 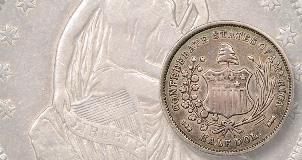 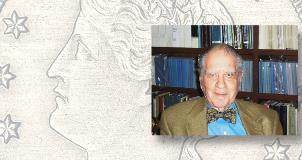