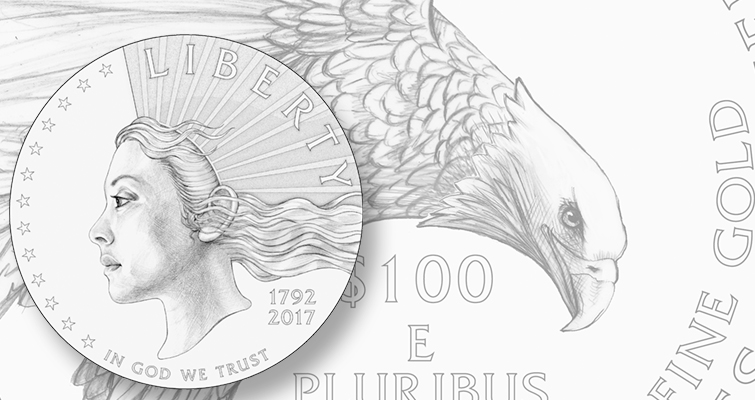 The Commission of Fine Arts selected these designs for the 2019 American Liberty gold coin. Some will like the designs and others will not.

Many collectors of U.S. coins love the concept of depicting Liberty on a coin, though for some, a design will be accepted only if the portrayal meets their definition of what Liberty “looks like.”

In their Sept. 20 meeting, members of the Commission of Fine Arts reviewed designs of the 2019 American Liberty, High Relief gold coin, to be promoted under the Virtues of Liberty banner. The designs include head-and-shoulders busts of Liberty, standing half-length  figures, Liberty wearing a spiked crown as worn by the Statue of Liberty in New York Harbor, Liberty holding a torch aloft or releasing flames or a dove from the palm of her hand, variations of the Liberty as Thomas Crawford’s Statue of Freedom atop the Capitol dome, Liberty wearing a garland of leaves around her head or wearing a Phrygian cap — in all, 10 designs total displaying Liberty in many forms.

Most of the designs depict Liberty as she has been portrayed since 1792, with Caucasian features, though it is difficult to be sure on a few faces. One of the pieces showing a close-up of Liberty’s face reveals distinctly Asian features, an apparent continuation of the diversity introduced with the 2017 and 2018 American Liberty gold coins and their portrait of an African-American Liberty.

Whatever finally appears on the 2019 American Liberty coin, we can predict that some will like it and some will hate it, just as it has been since 1792 when Liberty made her first appearance on a U.S. coin.