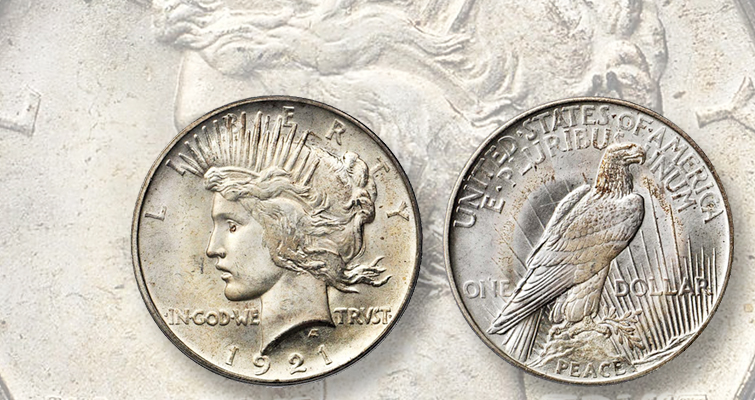 Among the surprises at Stack’s Bowers Galleries’ American Numismatic Association auctions in Philadelphia were the strong prices achieved by some wonderful Peace dollars from the Anne Kate Collection.

The Peace dollar series began in 1921 with Anthony de Francisci’s high relief design, which was lowered in 1922 to better suit it to mass coin production, and minting continued through 1928, resuming in 1934 and 1935.

A example of the 1921 Peace dollar — often collected as a one-year type in the series — certified as Mint State 67 by Professional Coin Grading Service, sold for a massive $132,000 at the Aug. 15 Rarities Night session. It is tied with six other submissions as the finest graded at PCGS.

The centers of both examples were weakly struck, as is almost always seen in this high relief issue, but the offered coin was particularly appealing, described as “Boldly lustrous silver gray with soft highlights of gold and pale blue blended across the surface giving the piece a pearlescent aspect.”