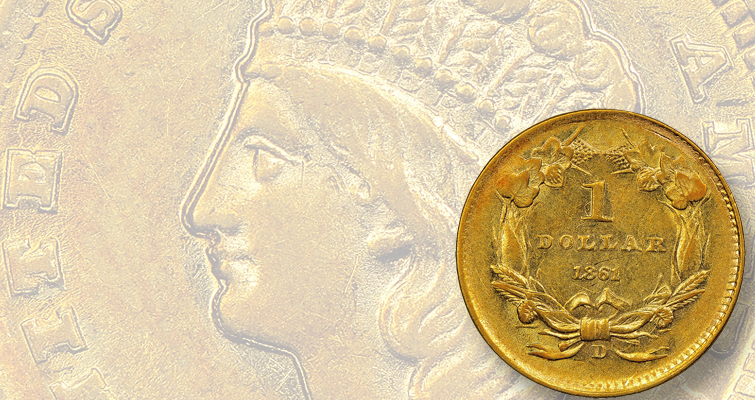 Total mintage for the 1861-D Indian Head gold dollar during the Dahlonega Mint's final year of operation is unknown. 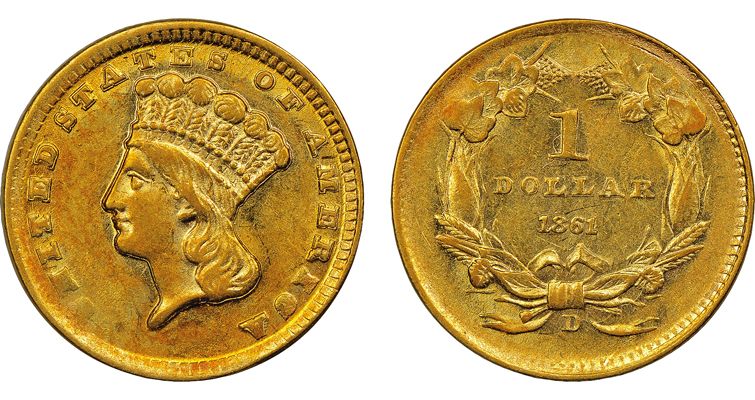 For the Dahlonega Mint, 1861 was the final year of production, which included Indian Head gold dollars. The facility was seized by the Confederacy soon after the American Civil War broke out. 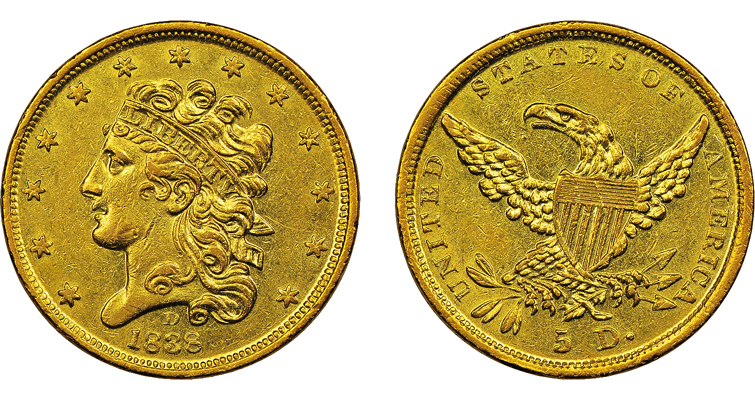 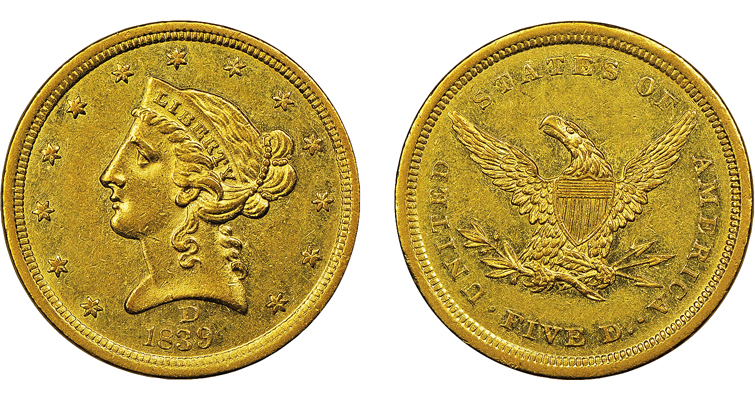 The Coronet design was introduced on the half eagle denomination in 1839. This coin is graded NGC AU-58. 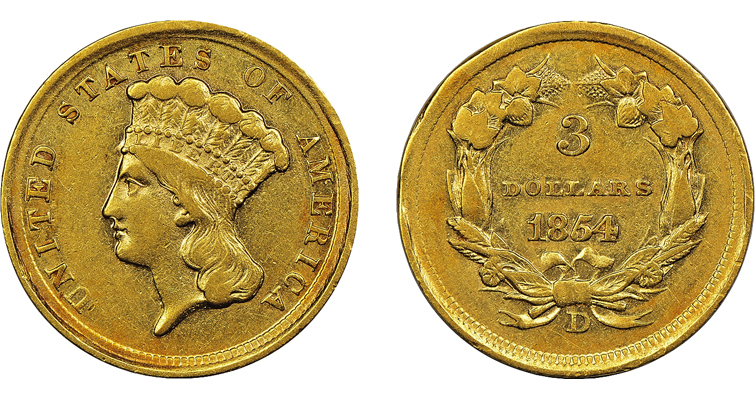 Only 1,120 examples of the 1854-D Indian Head $3 gold coin were struck during the denomination’s first year of production. This example is graded NGC AU-50. 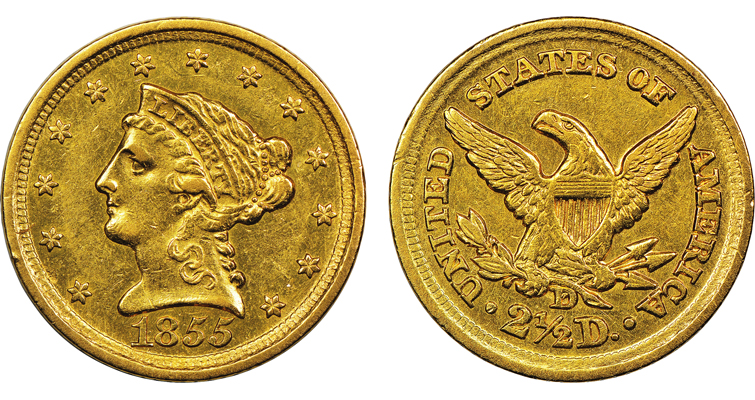 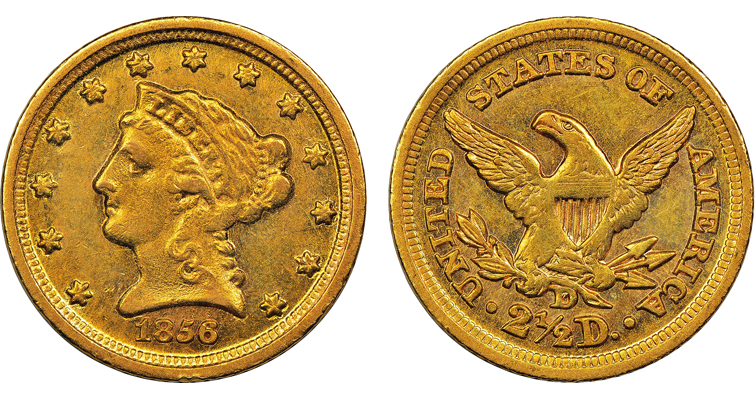 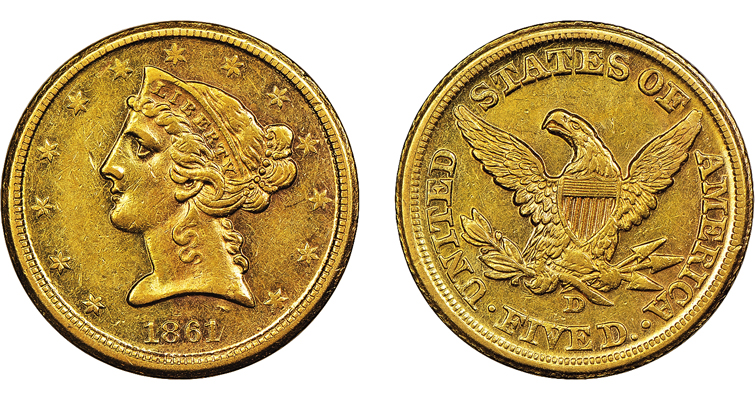 The Dahlonega Mint in Georgia only struck gold coins, from 1838 through 1861. This 1861-D Coronet $5 half eagle from the final year of production is graded NGC About Uncirculated 58.

A complete 62-coin set of gold coins struck at the Dahlonega Mint that was assembled for the express purpose of one day being donated and put on public display will go on exhibit June 5 at the University of Georgia in Athens.

The collection of Dahlonega Mint gold coins is a major component of an extensive multi-gallery presentation on the history of gold and gold mining in Georgia, the production of gold coins in the Branch Mint of the United States at Dahlonega, and the evolution of currency in America, including paper money, with a focus on Georgia.

Katherine Stein, director of the university’s Hargrett Rare Book and Manuscript Library, said the exhibit will be staged in the Russell Building Special Collections Libraries at the university.

The massive exhibit is scheduled to remain on public display through Dec. 5.

Stein said the exhibit — titled “Gold-digging in Georgia: America’s First Gold Rush,” — is based on the article “From Georgia to California and Back: The Rise, Fall, and Rebirth of Southern Gold Mining” by Dr. Drew Swanson, published in a 2016 issue of Georgia Historical Quarterly, published by the Georgia Historical Society.

Collector John McMullan took less than 10 years to assemble the collection of Dahlonega Mint gold coins, which were produced at the facility between 1838 and 1861.

The 81-year-old McMullan dubbed his assemblage The Reed Creek Collection after the region of Georgia in which his father, Thomas Leverette McMullan, was born and raised.

Mintages for many dates are extremely low, with the lowest being the unknown number of the 1861-D Indian Head gold dollar, all of which were produced while the U.S. Mint facility was under the control of the Confederate States of America. The Confederate government seized the facility during the opening year of the American Civil War.

The entire Reed Creek Collection has been graded and encapsulated by Numismatic Guaranty Corp. and Professional Coin Grading Service.

Among the highlights of The Reed Creek Collection, with published mintages and certified grades, are:

The Georgia Gold Rush of the 1830s pre-dated the more highly publicized California Gold Rush by more than a decade.

The university exhibit will trace the discovery of gold in Georgia and the long-term effects it had on the region and the nation.

According to one of the exhibit panels:

“In 1830, the Georgia legislature declared its control of all Cherokee territory within Georgia’s boundaries, and Congress passed the Indian Removal Act, which ultimately forced Native Americans from the state. State officials then began auctioning off Indian land; white Georgians could claim Cherokee territory in 160-acre agricultural lots and 40-acre mining tracts within the gold belt. President Andrew Jackson withdrew federal troops from the gold district giving Georgians the liberty to populate the territory. In 1838, the land grab concluded in the tragic forced march of Georgia’s remaining Cherokee to Indian Territory, in present-day Oklahoma.”

The Cherokee Nation had comprised more than 4 million acres.

“In 1835 the Treaty of New Echota, signed without the authority of Principal Chief John Ross or the Cherokee government, required the Cherokee Nation to exchange its lands for a parcel in the ‘Indian Territory’,” according to the exhibit narrative. “Beginning in 1838, President Martin Van Buren ordered the Cherokee to be removed, the forced march became known as the Trail of Tears where thousands of Cherokee perished due to lack of food, disease, and exposure to extreme temperatures.”

The American economy became stimulated by the Georgia gold, which initially was shipped to the Philadelphia Mint for assaying and coining. As gold production increased, so did the need for local output of federal coinage after assay locally.

The Mint Act of 1835 not only established Branch Mints of the United States in Dahlonega, but also in Charlotte, N.C., and New Orleans.

Coinage production commenced at the Branch Mints within three years of the act’s passage, ceasing in 1861 when the three facilities were seized by the Confederacy.

In its first year of operation, the Dahlonega Mint struck more than $100,000 worth of gold coins, eventually coining $6.1 million during its tenure.

McMullan said he began assembling The Reed Creek Collection as a tribute to his father with the Aug. 5, 2008, purchase of the first coin, the 1854-D Indian Head $3 coin.

McMullan’s father graduated circa 1919 or 1920 from the University of Georgia and upon graduation, took a job teaching agriculture in North Georgia College.

McMullan said while the complete collection he donated to the University of Georgia totals 62 coins, he actually held possession to 63 coins, the 63rd coin being an 1851-D Coronet half eagle.

The 1851-D half eagle was found in a bank safe deposit box upon the 1954 passing of Thomas Leverette McMullan. John McMullan said he didn’t take possession of the coin until the 1994 passing of his mother. He is keeping the coin as a memento of his father.

McMullan says he considers himself more of a “coin accumulator” than a sophisticated collector. Over his lifetime he says he has searched rolls of thousands of cents and half dollars, many of the half dollars obtained at banks during business excursions.

McMullan says he has relished the adventure of assembling The Reed Creek Collection. While several numismatists aided him during the first two years of his quest, McMullan credits Bob Harwell from Hancock & Harwell Rare Coins in Atlanta for the bulk of the effort, beginning in 2010.

Harwell was assisted in the coin searches by Jeff Garrett from Mid-American Rare Coin Galleries from Lexington, Ky.

McMullan said the toughest coin to obtain was one of the last needed to complete the collection — the 1861-D Indian Head gold dollar struck under Confederate auspices.

McMullan said he is relishing the opportunity to see the completed exhibit and how it is received by the public. 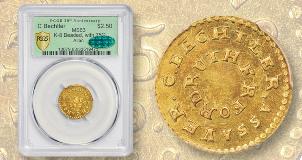 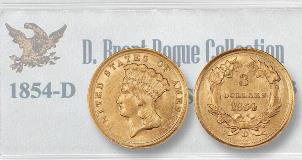