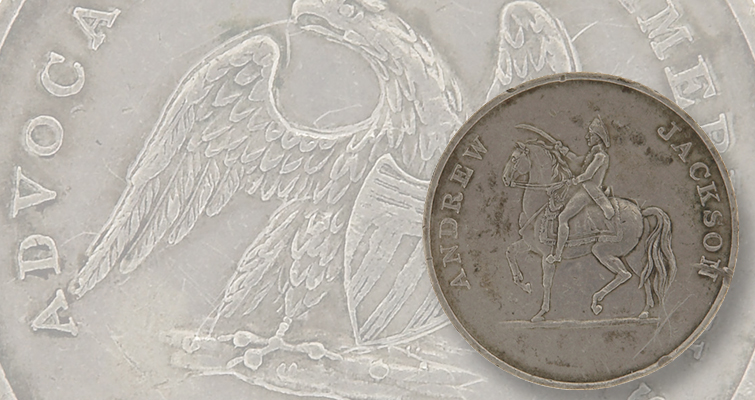 Many pieces of Andrew Jackson’s presidential campaign memorabilia from 1828 focused on his military exploits. 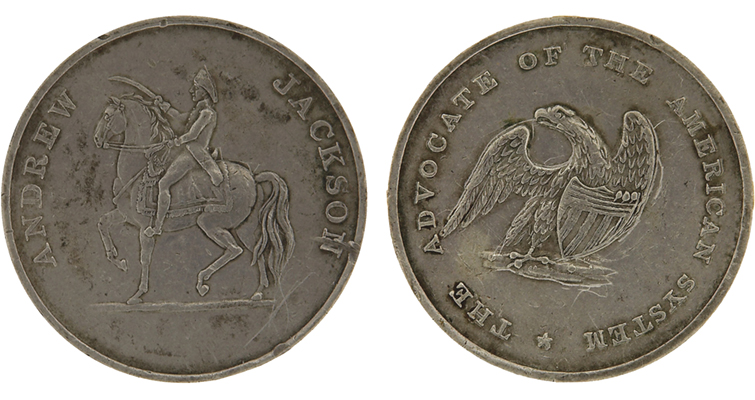 A 38-millimeter white metal presidential campaign medal touts candidate Andrew Jackson as THE ADVOCATE OF THE AMERICAN SYSTEM. The medal realized $1,015.75 in an Aug. 5, 2008, Heritage sale. 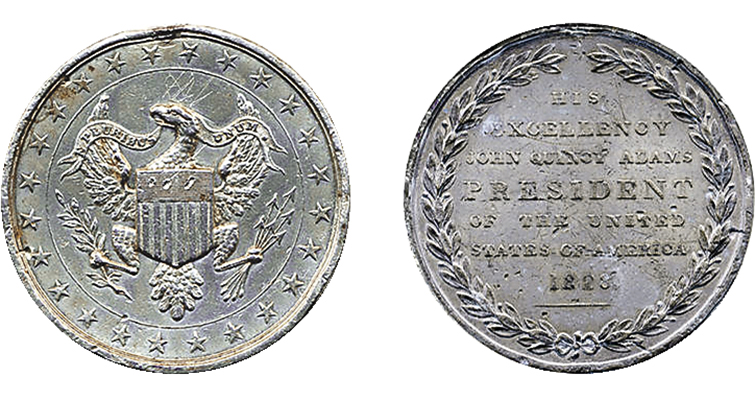 A 46-millimeter medal for John Quincy Adams from the bitterly contested election of 1828 (when Jackson sought “pay-back” after the Corrupt Bargain of 1824) rarely appears on the market in decent condition. The medal was produced in England and exported to America. 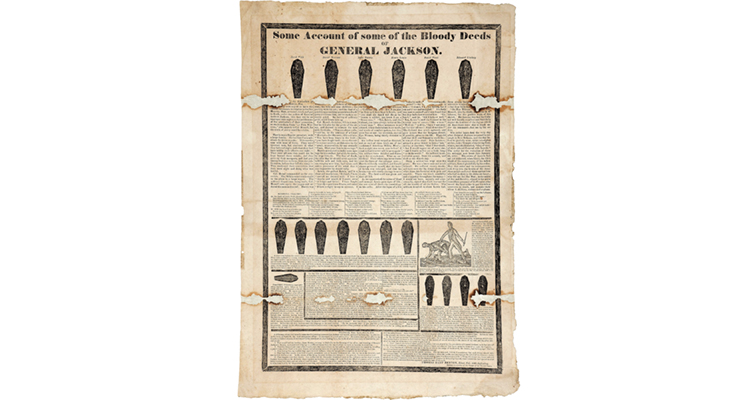 Anti-Jackson coffin handbill accuses the military hero and eventual seventh U.S. president of “murdering” militiamen and other atrocities. The handbill sold in a Nov. 17, 2010, sale by Heritage Auctions for $203.15. 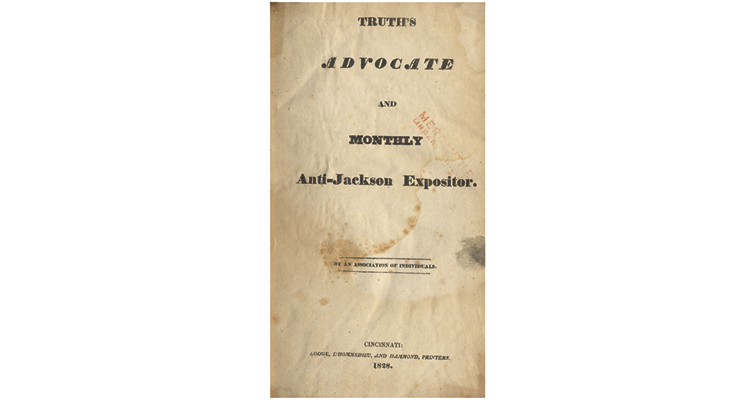 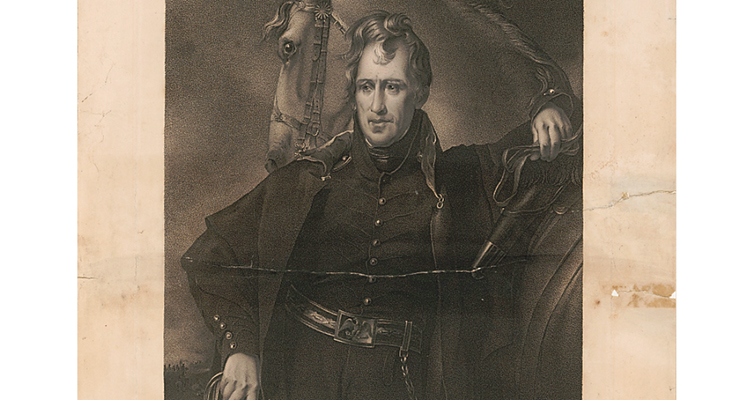 Andrew Jackson blamed John Quincy Adams’ vitriolic attacks on him and his wife, Rachel, for contributing to her declining health and eventual death. 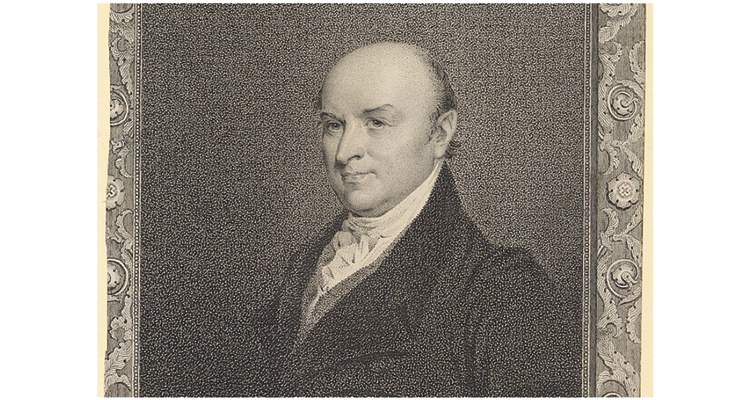 Incumbent President John Quincy Adams and his supporters spared no amount of mud slung in attempts to besmirch the candidacy of Gen. Andrew Jackson.

This is the first part of a multi-part series on Presidential campaign collectibles from the Nov. 7, 2016, monthly issue of Coin World:

The road to the White House is paved with many political collectibles issued during the campaigns of presidential hopefuls and eventual winners.

Political collectibles offer more opportunities to collectors seeking to represent a particular period in American history than most other collecting fields.

American Political Items Collectors, founded in 1945, chronicles the campaigns of those seeking to become chief executive and the political collectibles used as marketing tools in the candidates’ campaigns.

The 2016 presidential campaign comprises one of the most extensive lists of presidential wannabees ever assembled, with the Republicans having nearly two dozen contenders in the early stages, before the field was narrowed.

The victor in the Nov. 8, 2016, presidential election will be the 45th individual to hold the nation’s highest office.

Presidential campaign banners, badges, tokens and medals and more date back nearly 200 years, each item a window into a campaign and an age. All are collectible, and depending upon the presidential campaign and candidate being considered, the items available may cost only a few dollars each, or as much as thousands of dollars regardless of condition.

Even in 19th and early 20th century campaigns, many political campaign items were produced in support of the respective candidate and focused on the candidate’s positive attributes. That approach did not, however, eliminate issuance of items that took political, and personal, aim at an opponent.

In mapping out a collecting approach, a collector could focus on memorabilia from a single candidate, or choose examples representative of an entire campaign, including early contenders.

The record has yet to be completely written on the 2016 campaign.

In this article, let’s examine a few of the elections considered consequential, some that were particularly divisive, and others that just have many political collectibles available for hobbyists.

Although in the election of 1840, when William Henry Harrison squared off against Martin Van Buren, saw the first widespread use of presidential campaign collectibles, some of the initial political campaign items used to pull voters to a particular candidate’s side were produced in 1824 during the nation’s first presidential election whose results were contested. The election pitted John Quincy Adams, Andrew Jackson, Henry Clay and William Crawford against one other.

Four years after that first contested election, the presidential campaign of 1828 became what is considered by many historians to be the nastiest in American history, leaving Democrat Andrew Jackson as the victor to become the nation’s seventh president.

So nasty were the personal attacks between Jackson and the incumbent, John Quincy Adams, during the 1828 campaign that Jackson blamed the stress of the attacks for contributing to the death of his wife, Rachel, just days after he claimed victory.

When Jackson and Adams (along with the two other candidates) first faced one another in 1824, none of the four candidates garnered enough Electoral College votes to capture the White House outright. Jackson received the highest number of election day votes, Adams the second highest number, former Treasury Secretary Crawford third, and Speaker of the House Clay fourth. Under provisions of the U.S. Constitution, Clay’s candidacy was eliminated, leaving only the top three vote-getters to be considered. Clay, a staunch Adams supporter, delivered the presidency to Adams in exchange for being named secretary of state. Adams was declared the victor by the House of Representatives despite Jackson capturing a plurality of the popular vote.

The outcome of that 1824 campaign, dubbed “The Corrupt Bargain,” set the groundwork for the 1828 contest.

While Jackson’s support was deeply rooted in the South, “Old Hickory,” as Jackson was known, built support in the North through a political alliance with New York politician Martin Van Buren, who himself would later become president.

According to political historian Robert McNamara, “Even though the two candidates [Jackson and Adams] had strong differences on substantial issues, the resulting [1828] campaign turned out to be based on personalities. And the tactics employed were outrageously underhanded.”

Adams supporters attacked Jackson’s reputation of having an explosive temper and life filled with controversy despite his record as a military hero, which was earned primarily during the War of 1812 at the Battle of New Orleans.

Among criticisms Jackson faced was his participation in a number of duels, including killing a man in 1806.

Under Jackson’s military command in 1815, militia members were executed for desertion. National Republican newspaper editor Peter Binns endorsed the issuance of the notorious “coffin handbill,” a poster exhibiting six black coffins with the suggestion that the militiamen ordered executed had been murdered.

A number of varieties of the handbill exist.

Jackson’s detractors also accused him of adultery and his wife, Rachel, of bigamy.

When the couple married in 1791, Rachel was still legally married to her abusive first husband; she mistakenly believed that he had divorced her. The Jacksons were married again in 1794.

Adams’ camp labeled Jackson as a “slave-trading, gambling, brawling murderer.” They called Andrew Jackson’s dead mother “a common prostitute, brought to this country by the British soldiers after whose service she married a mulatto man with whom she had several children of which number General Jackson was one.”

Federalists labeled Rachel Jackson as “a dirty black wench” and “convicted adulteress.” They said she was prone to “open and notorious lewdness.”

Andrew Jackson considered stress from the attacks on his wife as the primary cause leading to her death Dec. 22, 1828, at age 61.

Meanwhile, everything wasn’t all peaches and cream for the Adams camp either.

Jackson supporters spread rumors that Adams — while serving as the American ambassador to Russia — had procured the sexual service of an American girl, actually his wife’s maid, for the Russian czar, Alexander II.

Adams was also accused of billing the government for a billiards table he had installed at the White House, a baseless claim since Adams had paid for the table with his own funds.

While Adams elected not to participate further in the scurrilous attacks, Jackson, on the other hand, stepped up the assaults.

Jackson reportedly engineered with newspaper editors when and how attacks against him should be countered, and how his own personal campaign against Adams should proceed.

Collectors have the opportunity to add to their collections political memorabilia that recounts both the positive support within the campaigns of the respective candidates and the vitriol exchanged between them. 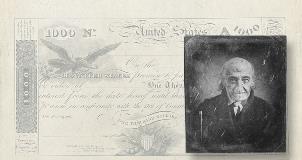 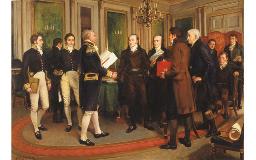 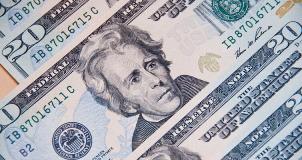