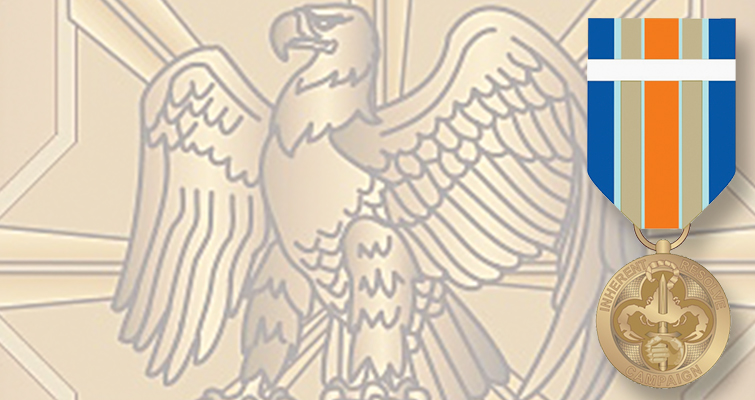 President Obama issued an executive order establishing the Inherent Resolve Campaign Medal for U.S. military service personnel who have served in Iraq, Syria, or contiguous waters or airspace on or after June 15, 2014. 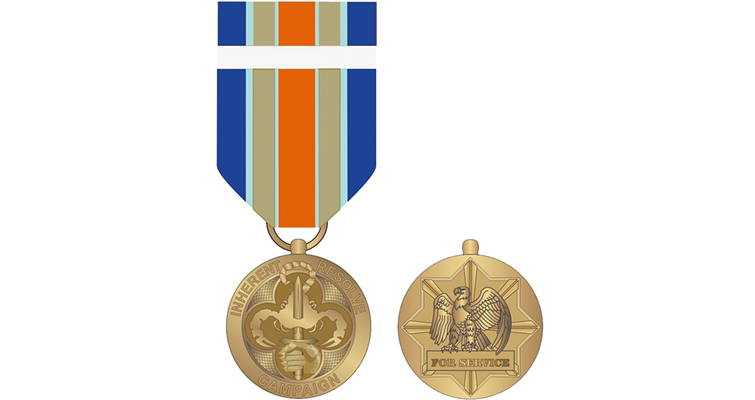 Images courtesy of Department of Defense.

An executive order establishing the Inherent Resolve Campaign Medal for U.S. military personnel serving in the U.S. war against ISIS was issued March 30 by President Obama.

The medal is to be awarded to those who are serving or have served in Iraq, Syria or contiguous waters or airspace on or after June 15, 2014, in the conflict against the Islamic State and who meet eligibility requirements.

Charles Mugno, a retired colonel of the U.S. Marine Corps and now the director of The Institute of Heraldry, said April 5 that examples of the medals for military presentation and commercial sale should be available within 90 days once all dies, hubs and respective tooling are ready for production.

President Obama’s executive order states, “The Inherent Resolve Campaign Medal shall be awarded to members of the Armed Forces of the United States who serve or have served in Iraq, Syria, or contiguous waters or airspace on or after June 15, 2014, and before a terminal date to be prescribed by the Secretary of Defense.”

Military service personnel who qualified for and received the Global War on Terrorism Expeditionary Medal for their service in the same geographic regions may exchange their GWOT medal for the Inherent Resolve Campaign Medal.

The Inherent Resolve Campaign Medal is to be struck in bronze in 1.25-inch diameter.

Mugno said none of the military medals are cast. All are struck to bring out the relief of the respective designs. Mugno said The Institute of Heraldry collectively designed the medal, with the Commission of Fine Arts recommending final approval in January.

The medal will be struck by a series of approved and certified manufacturers, with no one manufacturer securing exclusive rights to produce the pieces, according to Mugno.

Maj. Ben Sakrisson, Department of Defense spokesman, provided details describing the obverse and reverse designs for the Inherent Resolve Campaign Medal and the symbolism of the devices.

“In the case of the Inherent Resolve Campaign medal, a scorpion represents a predator arachnid that is often found [in] arid desert climates,” according to Sakrisson. “The sword or dagger is a defensive weapon used to guard and protect from dangerous elements. The armored hand clutching the dagger represents strength and courage in the defense of liberty and freedom. This armored hand is widely used in military heraldry for this purpose. Among the more notable military symbols incorporating the armored hand is the USAF Strategic Air Command heraldic shield.

“When combining these two symbols into the design of a military campaign they represent the defense of freedom, liberty, and justice from those predators who infringe on these values consider sacred to a free and orderly society.

“The ribbon is blue, teal, sand, and orange. The color combination in the ribbon was inspired by The Ishtar Gate and the color of sand,” Sakrisson said. 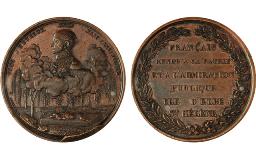 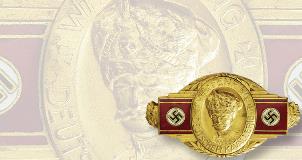