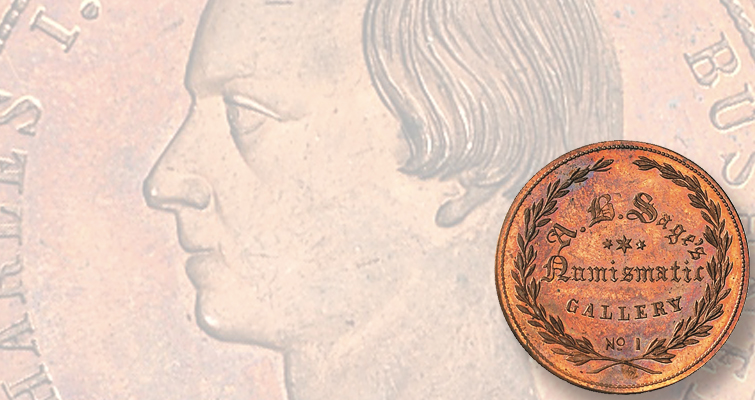 1859 was a busy year for numismatics, with collector/dealer Augustus G. Sage leading the charge. 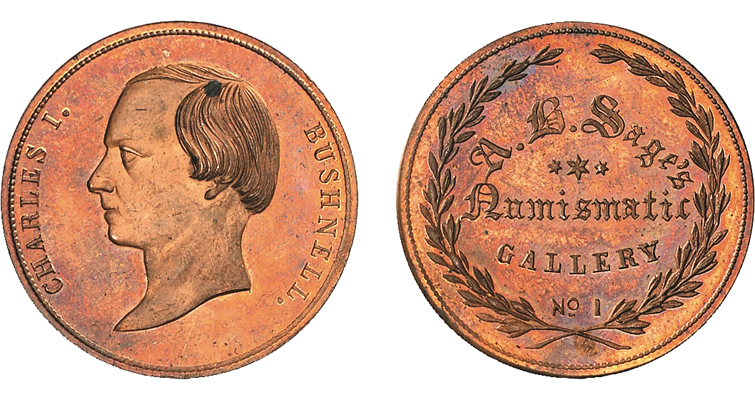 In 1859 Augustus Sage issued the Numismatic Gallery series of 39-millimeter medalets, the first featuring Charles I. Bushnell, a leading collector and scholar of the era.

The Joys of Collecting column from the April 18, 2016, Weekly issue of Coin World:

On March 15, 1858, Augustus G. Sage and friends formed the American Numismatic Society, the second such coin-collecting group in the United States.

The other, the Philadelphia Numismatic Society, was two months and 15 days older, having been formed on New Year’s Day.

Excitement prevailed at the ANS, and in the next two weeks five more meetings were held.

Additional meetings followed in that year, continuing into spring and early summer 1859, after which time-out was called for the hot summer.

It seems that at the end of the school term, in spring 1859, Sage resigned as a teacher in School No. 12 in the Seventh Ward, and decided to become a full-time numismatist and book dealer.

The first ANS meeting of the autumn was held at Sage’s office on Oct. 13, at which time it was announced that arrangements had been made for “the temporary gift of a room in the Cooper Institute.”

On Oct. 20, 1859, the new room was utilized at a meeting that included Dr. Mark W. Collet, of Philadelphia, as a guest and featured speaker.

It was soon learned that the temporary gift of a room at the Cooper Institute was, indeed, temporary, and the ANS could no longer meet there.

What happened next is not known with certainty. Local dealers Sage and Ezra Hill may have incurred the displeasure of some of the older members, there may have been internal dissent that was not recorded in society minutes, or perhaps the activities were suspended until another meeting room could be found, or perhaps something else went awry.

Augustus B. Sage was alive and well and even issued a store card in 1860, following his illustrious series of This and That, Historical Series, and Numismatic Gallery tokens of 1858 and 1859. Then he seems to have closed up shop.

Today the American Numismatic Society is a dynamic presence with its headquarters — including an incomparable library and museum — on Varick Street in New York City.

How could that be?