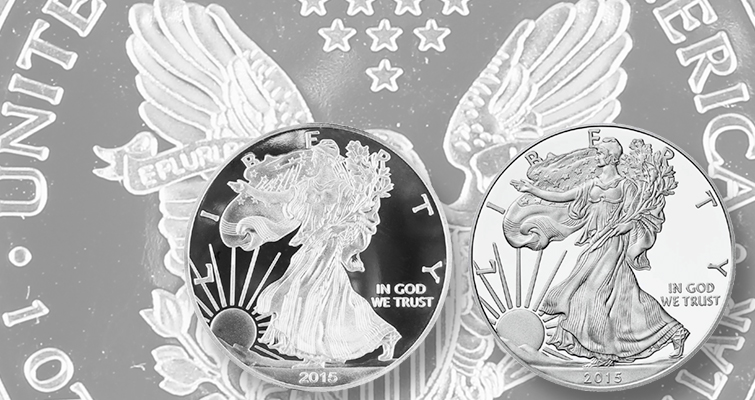 Counterfeit Proof 2015-W American Eagle silver piece, above left, and genuine issue of the same date, above right, are superimposed over an enlarged image of a segment of the fake coin's reverse. 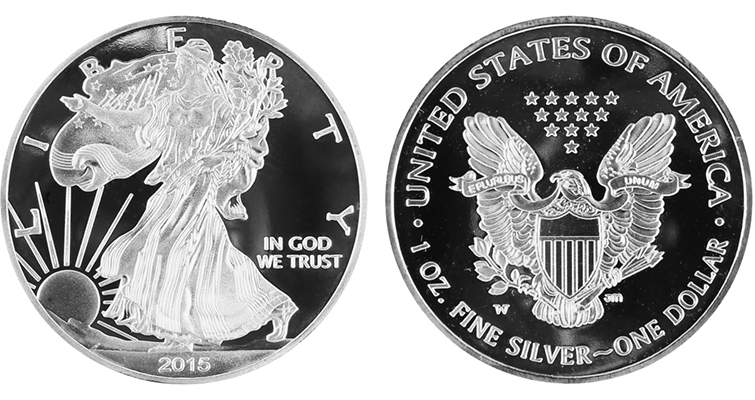 Obverse and reverse of counterfeit Proof 2015-W American Eagle silver piece that ICG numismatist Skip Fazzari purchased at a Florida coin show in February from a collector who previously purchased it, in U.S. Mint packaging, on eBay. 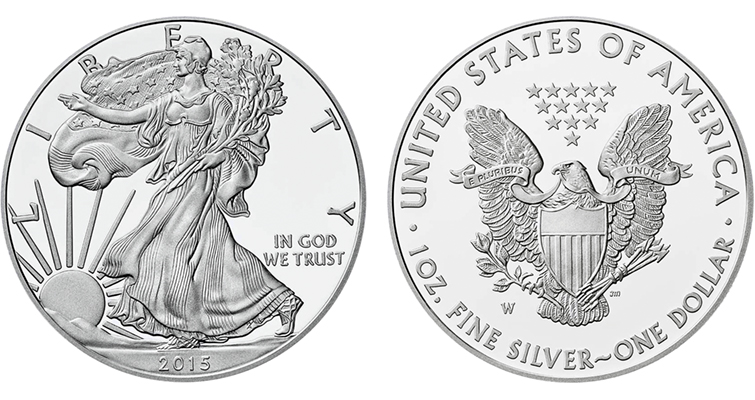 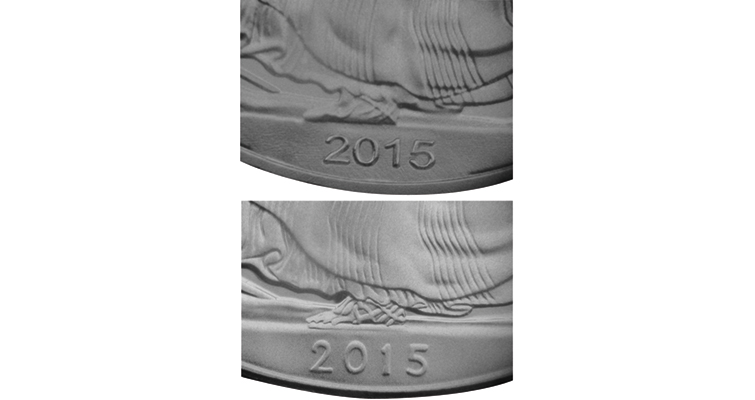 Compare date on fake coin, top, with genuine issue below. The 5 is more distant from the 1 compared to the spacing of the other date digits, and the 1 has a long, slender serif. On the genuine coin, the digits are evenly space and the 1 has a very small serif. 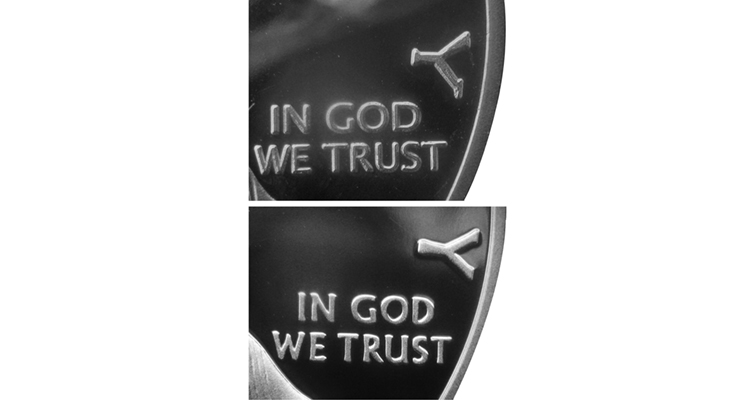 The branches on the Y in LIBERTY on the fake Proof silver Eagle, top, are broadly spread, with serifs on the three tips of the letter. On the genuine coin, the branches are closer together and sans serifs. 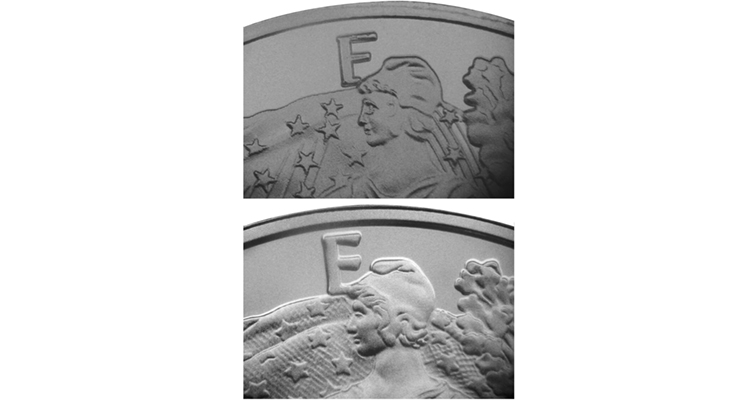 Liberty's face on the counterfeit, at top, exhibits a raised marl under her eye, the cap is mushy and ill defined as are fabric details on the flag. The same details on the genuine coin, below, are sharply defined. 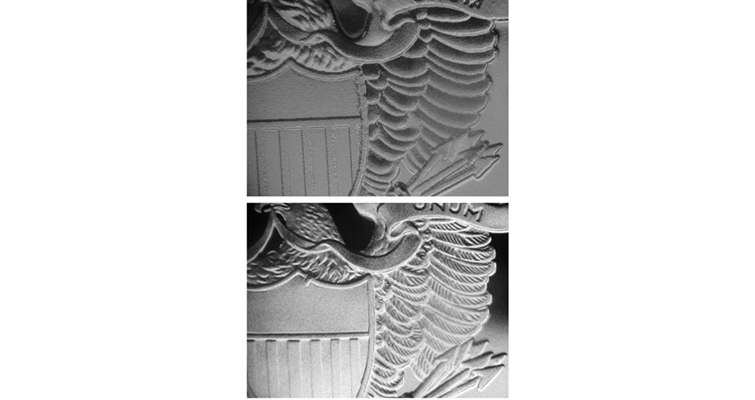 The latest counterfeit to infiltrate the collector market is a fake Proof 2015-W American Eagle silver dollar that appeared at a Florida coin show in February.

Reports have also surfaced of several other different Proof dates also appearing, with 2013 and 2014 pieces among them.

Examples are also reportedly being offered through online outlets.

The counterfeits are offered housed in original U.S. Mint packaging with genuine government-issued certificates of authenticity.

The counterfeit 2015 coin was reported March 7 to Coin World by F. Michael “Skip” Fazzari, a numismatist with Independent Coin Graders in Tampa, Fla.

Fazzari said an unnamed coin dealer purchased a small group of what turned out to be counterfeit Proof American Eagle silver dollars at The Collectorama Coin & Currency Show Feb. 19 to 21 in Lakeland, Fla.

Fazzari said he was able to purchase an example of a counterfeit Proof 2015-W American Eagle silver dollar that a collector brought to the ICG table for examination at the Sarasota & Manatee Coin Club Show in Sarasota Feb. 26 to 28.

So that he could examine the diagnostics, Fazzari said, he compensated the collector the $45 that was originally paid to acquire the coin from an eBay auction.

“The coins are good enough so that a dealer opening the box to make sure a coin was inside would see a blazing Proof,” Fazzari said. “However, a close naked-eye inspection by a bullion dealer would probably be enough to detect a scam,” he said.

“Microscopic examination of the box, Mint certificate, and case looked OK. The alloy eagle on the velvet box has a slightly different micro finish, but is probably OK. I see no point in faking the entire set as the counterfeiter can purchase a genuine set from the Mint and replace the genuine Proof with the fake.”

Fazzari surmises genuine Mint packaging could have been acquired on eBay or at a coin show where packaging is sold separated from its contents, by dealers or collectors.

The empty boxes, still often containing the certificate of authenticity, remain after the coins are removed, often for submission to a third-party grading service, according to Fazzari.

Adam Stump, deputy director of the U.S. Mint’s Office of Corporate Communication, said March 7 that while the Mint does offer through its website individual storage and display boxes without coins, “There is not a box for silver Proof American Eagles that can be ordered direct from the website by itself.”

What to look for

Fazzari said he detailed the specifications for the counterfeit against the standards for a genuine Proof American Eagle silver dollar.

The counterfeit did not test positive for silver or copper using an electronic metals analyzer, Fazzari said. The fake has a specific gravity of 8.4, but currently its metallic composition is unknown.

Although crudely manufactured, Fazzari said the counterfeit is close enough in general appearance to a genuine coin “to fool the average collector or first-time buyer.”

Fazzari recommends buyers pay particular attention to the date on the 2015 coin, which has a number of useful diagnostics.

Among other features, the American flag behind Liberty on the fake’s obverse is crude, with mushy stars.

Buyers should also examine lettering on the obverse of the coin. The Y in LIBERTY appears with serifs on the fake, but is sans serif on the genuine coin.

The overall surface appearance on the fake’s obverse is granular, compared with the genuine coin’s more satiny-looking finish.

On the reverse of the fake, all of the devices are raggedy-edged, without definition, most prominently on the eagle’s feathers and the stripes on the shield. Five stripes are visible on the fake, while six appear on the genuine coin.

In addition, lettering differences for the inscriptions are also visible. The U in UNITED on the fake does not have the tail that appears on the U on the genuine coin. The motto E PLURIBUS UNUM on the ribbon held in the eagle’s beak is incuse on the genuine coin and raised on the counterfeit.

One other useful diagnostic: the W Mint mark of the West Point Mint on the genuine coin is tall and thin, while on the fake, it is squatty and thicker. 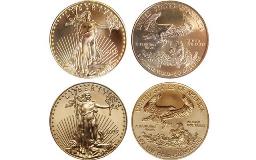