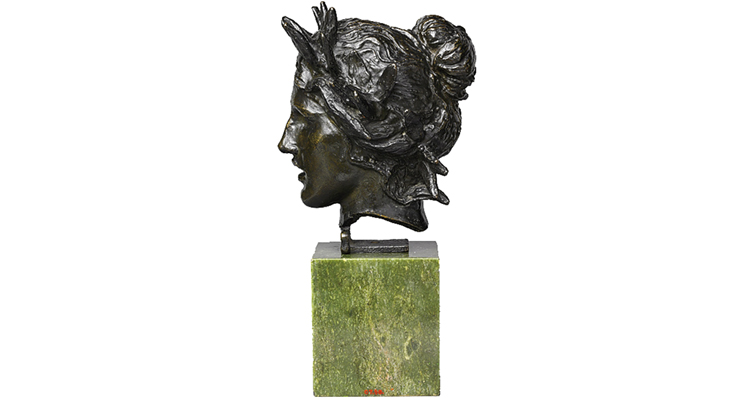 De Francisci's teacher and mentor James Fraser loaned the artist a bust of Victory by Augustus Saint-Gaudens to provide an example of "a beautiful type." This example was purchased by the Metropolitan Museum of Art directly from Saint-Gaudens, shortly before his death in 1907. 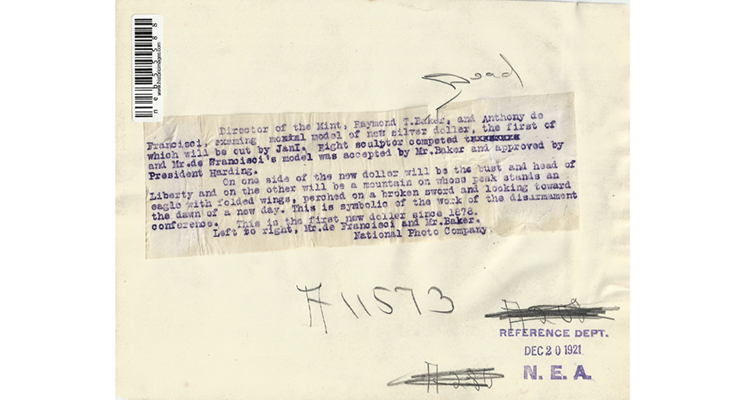 A label on the back of one of the original photos from the archive of the newspaper is dated Dec. 20, 1921, and describes the broken sword reverse, which was modified to remove the potentially offensive symbol of war’s completion.

Anthony de Francisci was, along with most sculptors in the United States, consumed with producing wartime memorials, sculptures and medals commemorating World War I in the years immediately after the Great War ended.

His designs for the Maine Centennial half dollar in 1920 were based on original drawings by Harry Cochrane, and when comparing the two artist’s work, one sees De Francisci’s hand specifically in the elegant elongated letters used on both sides and greater articulation in the figures on the obverse and the reverse wreath. Even de Francisci was underwhelmed with the finished product when asked about it later.

For the Peace dollar design, de Francisci drew upon work for items he had recently completed, including the Verdun city medal and the Peace of Versailles medal design. Trial sketches for the reverse show the artist experimenting with a flying eagle not dissimilar to that used on Augustus Saint-Gaudens’ double eagle and an eagle breaking a sword that looks to Weinman’s Walking Liberty half dollar, with nods to the eagle seen on Bela Lyon Pratt’s sunken Indian Head gold $5 half eagle and $2.50 quarter eagle.

Read the first post in this series on the history of the Peace dollar:

De Francisci’s final plasters reviewed by the Commission of Fine Arts on Dec. 13, 1921, show the familiar obverse with a date in Roman numerals, along with two reverses: one similar to the adopted one, and the other with a different eagle and a prominent broken sword motif.

The commission reviewed plaster models from the eight invited sculptors, along with a set from Morgan who was ordered by the Mint director to submit designs, and a mysterious Mr. Folio of New York City, although Morgan’s and Folio’s designs were not considered part of the competition.

These designs and the evaluation process, along with the specific criteria used are a mystery of 20th century numismatics. Ultimately, de Francisci, only 34 years old at the time, won the competition, and his design, with a portrait inspired by his 22-year-old wife Teresa, emerged the victor. De Francisci’s former teacher James Fraser assisted de Francisci in preparing the completed models and, to help with this, Fraser loaned de Fransicsi a bust of Victory by Saint-Gaudens to provide an example of what Fraser called, “a beautiful type.”

President Harding examined the final designs on Dec. 20, and images of Mint Director Baker and de Francisci examining the model of the new dollars were sent to newspapers across the country. Surprisingly, a description on the back of a contemporary photo from the National Photo Company that came from the reference department of a newspaper dated Dec. 20, 1921, states: “On one side of the new dollar will be the bust and head of Liberty and on the other will be a mountain on whose peak stands an eagle with folded wings, perched on a broken sword and looking toward the dawn of a new day. This is symbolic of the work of the disarmament conference.”

The photo shows only the back of the plaster model, and no photos of the designs were released as Treasury officials did not want newspapers to publish pictures of a new U.S. coin. Burdette notes that these pictures were taken before Harding had seen the models and publicizing a coin design that had not yet been approved could have been problematic.

Plaster models and bronze casts made at the recommendation of Fraser arrived at the Philadelphia Mint on Dec. 21, 1921, at 2:30 p.m. and Freas Styer, superintendent, characterized the casting as rough and said that the bronze casting of the reverse was a failure. He ended his letter explaining, “Unless something unforeseen happens, and by using the New York casting, we ought to have dies for coinage on December 29th.”

Modifications from the submitted design to the final one include a softening of Liberty’s mouth and chin, changing the date to traditional numbers and adding the word PEACE to the reverse. The broken sword, which had been used as a symbol of the end of war on contemporary medals and statues, was ultimately removed from the production design. The design feature was criticized publicly.

An editorial in the New York Herald’s Dec. 21, 1921, Late Edition titled “The Broken Sword” stated that a broken sword carries “only unpleasant associations” and is broken when its owner has disgraced himself. The author added: “But America has not broken its sword. It has not been cashiered or beaten; it has not lost allegiance to itself. The blade is bright and keen and wholly dependable.” Calling the usage an “error in symbolism,” the observation seemed to resonate with readers and two days later the Mint modified the design to remove the broken sword.