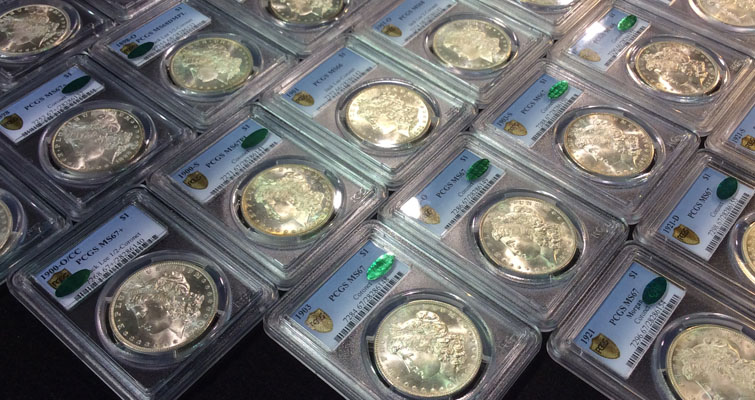 Morgan dollars of the Coronet Collection, the top collection in the PCGS Set Registry, were on display at the 2015 ANA World's Fair of Money.

It's hard to walk by a Morgan dollar display at the ANA World's Fair of Money without having a quick look. That's especially true when the display includes the top collection of Morgan dollars in the PCGS Set Registry.

Legend Rare Coin Auctions had the second half of the Coronet Collection on display at its 2015 World's Fair of Money booth in Rosemont, Ill. The group of coins dated 1894 to 1921 will be auctioned off during Legend's Oct. 15 Regency Auction.

The earlier half of the collection, featuring coins dated 1878 to 1893, were sold by Legend during a June 25 auction.

"Morgan Silver Dollar collectors are, without a doubt, the fiercest competitors in the PCGS Set Registry," a Legend release Coin World published in January reads. "Amidst all that competition, The Coronet Collection has risen to the top as the number one current finest Date Set and Basic Set. The Coronet Collection is filled with 'wow' coins, many with spectacular color, eye appeal, superior strikes, and unbelievable quality — or all of the above."

Among the notable second-half examples in the Coronet Collection are a Mint State 66 1897-O edition, an MS-68 1898-S edition, an MS-67 Prooflike 1900-S edition, and an MS-66 1901 edition. The first three all are endorsed by the Certified Acceptance Corporation, indicated by the firm's green sticker.