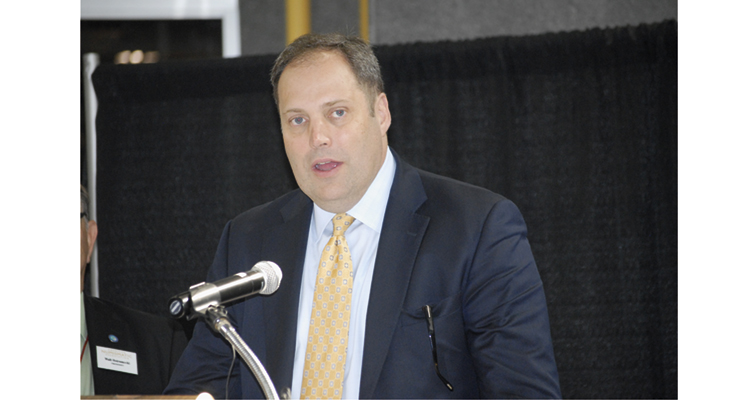 The United States Mint will be striking and releasing in 2015 an American Eagle 1-ounce platinum bullion coin.

Rhett Jeppson, principal deputy director of the United States Mint and President Obama’s nominee for 39th Mint director, said Aug. 11 that the American Eagle platinum bullion coins will be available for sale sometime during the first three months of the 2016 federal fiscal year. That means sometime from Oct. 1 to Dec. 31, 2015.

During an interview with Coin World at the American Numismatic Association World’s Fair of Money in Rosemont, Ill., Jeppson said production mintages for market distribution for the 2015 American Eagle platinum bullion coins have not yet been determined.

The 2015 American Eagle platinum bullion coins will bear the same Statue of Liberty obverse and Heraldic Eagle reverse designs that have been on the bullion coins since their introduction in 1997.

Jeppson said the Mint intends to get input from authorized purchasers and secondary market distributors concerning whether to resume production of fractional half-, quarter- and tenth-ounce coins, which were last produced in 2008.

Traditionally, a presidential medal has been produced bearing an obverse portrait of the president. When elected to a second term, a second medal bears the conjoined portraits of the president and his vice president, in this case, Joe Biden.

Jeppson did not indicate whether there would be one or two medals.

There is also the possibility the Mint could resume production of bronze Treasury secretary and Mint director medals, whose production was eliminated during Treasury Secretary Timothy F. Geithner’s tenure.

In January 2011, the Mint was in the process of finalizing designs of a medal for the 38th Mint director, Edmond C. Moy, when Geithner made the decision the medals would not be produced.

As the possibility of a palladium American Eagle bullion coin moves closer to reality with legislation working its way through Congress, the Mint is working to establish a supply chain for acquiring the necessary metal to fabricate blanks. Jeppson said the Mint is taking a “conservative” approach and is studying all of the issues, including mintages.

The Mint is addressing the likelihood of digitizing for online access its collection of “heritage assets,” much the same way the Smithsonian Institution’s Museum of American History has been digitizing the National Numismatic Collection. The U.S. Mint’s curator, Robert Goler, has spent the past several years cataloging the thousands of coins, medals, plaster models and other related items housed at the Mint’s production facilities.

Jeppson said Aug. 11 that he planned to send a letter “this week” to Treasury Secretary Jacob Lew seeking approval to move ahead with plans to produce in 2016 centennial versions of the Winged Liberty Head dime, Standing Liberty quarter dollar and Walking Liberty half dollar in .9999 fine gold.

The dime would be a tenth-ounce coin, the quarter dollar a quarter-ounce piece and the half dollar a half-ounce coin.

All three coins were originally struck for circulation in an alloy of 90 percent silver and 10 percent copper.

Jeppson said the approval process could take two months. Many of the coin matters under Lew’s authority have been delegated to Deputy Treasury Secretary Sarah Bloom Raskin.

Jeppson and Jon Cameron, acting associate director of sales and marketing for the Mint, said Mint officials are looking at various possibilities of surface finishes for use on the three coins, as well as packaging options.

Research and development is ongoing in the search for alternative compositions for U.S. coins. Jeppson said the Mint plans to issue an interim report on the progress of the research and identify what alloys are still in contention for what denominations.

The Mint, as required under 2010 legislation, issued biennial progress reports in December 2012 and December 2014.

Cameron said the Mint is also exploring the possibilities of employing “push-back” technology in blank production for denominations that circulate.

Currently, only the blanks for the cent are produced outside the Mint and ready to strike. The 5-cent coin, dime, quarter dollar, half dollar and dollar blanks are punched by the Mint from coiled strip supplied by outside vendors.

The blanks for all denominations except the dollar are then annealed, or heated, to soften the metal before upsetting to form a raised rim.

The dollar blanks receive a hard upset, meaning after being punched from the coinage strip, the blanks go directly to the upsetting operation, and are then annealed before striking.