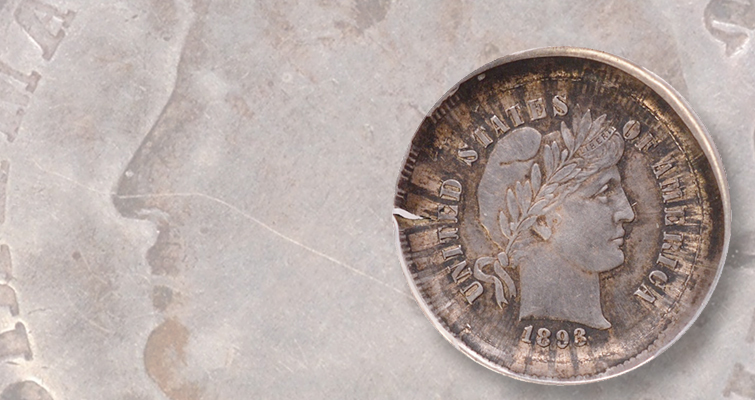 A PCGS AU-55 1893 Barber dime error with obverse die cap and reverse brockage was obtained by a collector in 2012 from an acquaintance at a Kentucky bingo hall. 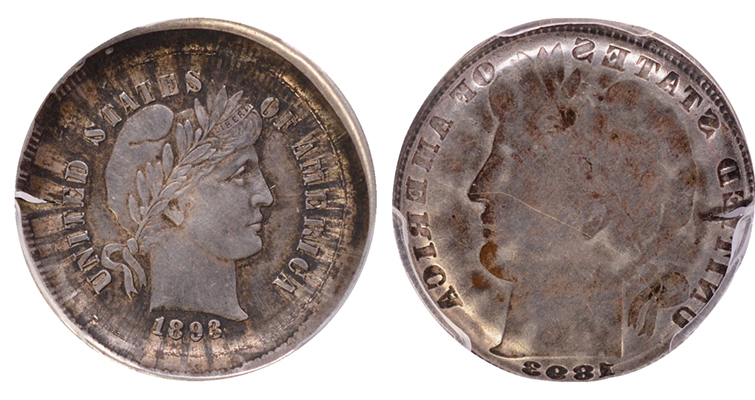 The full obverse brockage on the reverse of this obverse die cap 1893 Barber dime error is a mirror image of the obverse, but with the details incused and reversed. 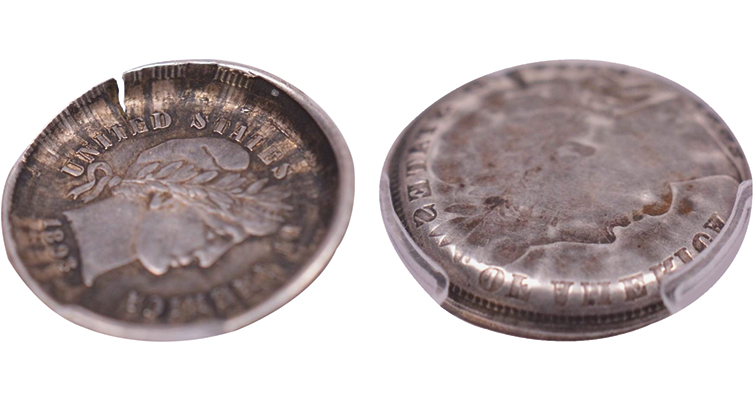 Oblique images show the depth of the dish on the obverse die cap and the planchet split at the 10 o’clock position.The details of the reverse brockage are incused and reversed.

Kentucky collector Daryl Padgett knew immediately, more than three years ago, that the error 1893 Barber dime he'd just obtained from an acquaintance had some value, but he didn’t pursue learning how much value until recently.

Padgett said he purchased the error coin from an acquaintance at a local bingo hall. The man was looking for extra cash to finish out his evening of playing bingo.

The $75 Padgett paid was for several coins — the error dime along with a small number of other coins, some foreign, some silver, Padgett said. Padgett said he told the acquaintance that if he ever sold the error piece, he would pay the man an additional $50, which he since has.

Padgett said he recently came across a Coin World advertisement by Jon Sullivan from Sullivan Numismatics in Charleston, S.C., seeking U.S. Mint error coins. Padgett submitted the coin to Sullivan, who in turn shipped the coin off to Professional Coin Grading Service for grading and encapsulation.

PCGS certified the coin as an obverse die cap with a full obverse brockage on its reverse and graded the piece About Uncirculated 55.

According to Sullivan, Padgett was compensated an undisclosed sum for the error coin, one of fewer than 10 known die cap errors for the Barber dime series.

Sullivan subsequently sold the coin to error coin dealer Mike Byers from Mike Byers Inc. in Las Vegas, Nev., who is offering the coin for $25,000, both on his website and on eBay.

“It's unique since the reverse is an incuse brockage of the obverse, creating counterbrockages,” Byers said.

The obverse of the 1893 Barber dime error appears deeply dished, from having become stuck on the upper hammer die. The force of the striking pressure when struck against another coin, and possibly a subsequent planchet, caused the .900 fine silver piece to split, from between and just above the T and E in UNITED out through the rim.

On the reverse, a brockage image of the obverse of the coin this piece was struck against appears. A brockage is a mirror duplicate of the original design, but with all details reversed and incuse.

Error experts who have seen the coin or detailed photos of it differ slightly on what to call the coin, as they are in general agreement as to how the error initially occurred but not in complete agreement on what happened immediately afterward.

According to Sullivan, the die cap dime error occurred after a planchet was fed into the striking chamber, struck, and failed to be ejected. “Then this Barber dime die cap’s planchet was fed on top of that struck coin that was still resting on top of the reverse die, and struck into it, created a mirror brockage of the obverse on the reverse side, and also causing the coin to stick to the obverse (hammer) die,” Sullivan explained by email Aug. 24.

Mike Diamond, another error expert and author of Coin World’s Collectors’ Clearinghouse column, agrees on the way the error occurred, writing after viewing photos of the coin: “Clearly the coin represents a planchet that was fed on top of a previously-struck coin that was itself struck normally. Given the considerable expansion seen in the top coin, it’s likely both coins were then struck out-of-collar.”

Diamond adds, “I can’t say for certain that there was more than one strike involved. However, what appears to be a semi-circular 'strike line’ in the obverse slide zone halfway between the peripheral letters and the upturned edge of the coin may indicate the presence of a second strike."

Diamond disagrees with one description of the coin.

“By itself, the presence of cupping is not a reliable indicator of a die cap or multiple strikes. It’s normal in the course of a single strike for the periphery of a coin to curl toward the hammer die when it’s struck on top of another coin or planchet, especially when both coins are struck out-of-collar.

“I see no evidence that this coin ever functioned as a die cap. In other words, I see no evidence that a fresh planchet was fed beneath the brockage generated by the first strike. If that had been the case, then the central design would be much more expanded, distorted, and indistinct. Instead, the bust of LIBERTY is still sharply defined and only slightly more expanded than the peripheral letters. This is to be expected, as the center of the design remained beneath the hammer die throughout the downstroke and received the full force of the strike.  Peripheral elements 'squirted out’ from beneath the hammer die during the downstroke and didn't receive the full impact.

“There’ one other reason I’m skeptical about the die cap diagnosis,” Diamond added.  “If the brockaged coin — already cupped from the first strike — had struck another planchet, you might expect to see a more sharply defined transition between the wall and the floor.  But what you see is a smooth transition from the upturned portion of reverse face to the horizontal portion.

“If I were describing the coin, I’d opt for a more conservative interpretation: a cupped broadstrike with a full, centered, first-strike brockage of the obverse design on the reverse face,” Diamond said.