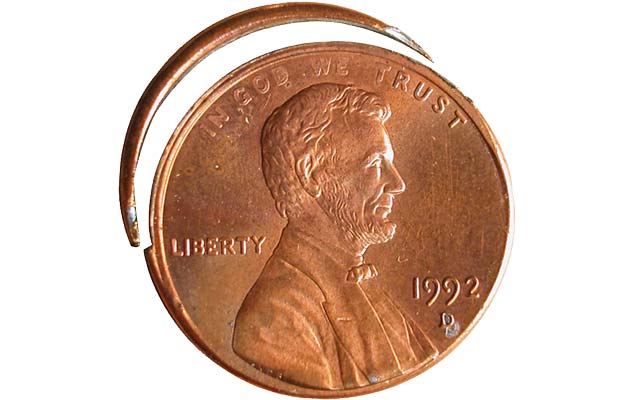 A featureless crescentic strike clip and an elliptical strike clip are assembled into a complete 1992 Lincoln cent. 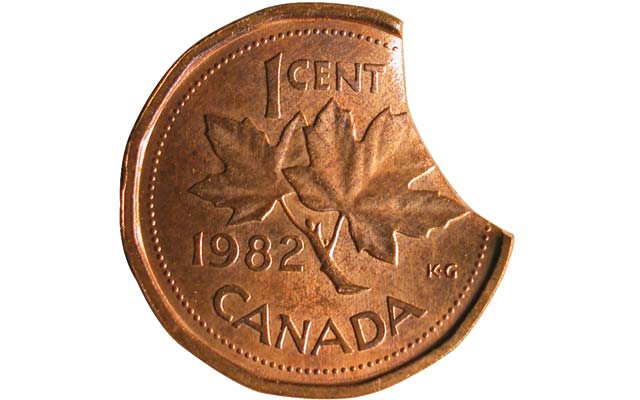 Under ordinary circumstances, the polygonal notch on this 1982 Canadian cent would have been a second strike with a brockage on the reverse (upper) face. 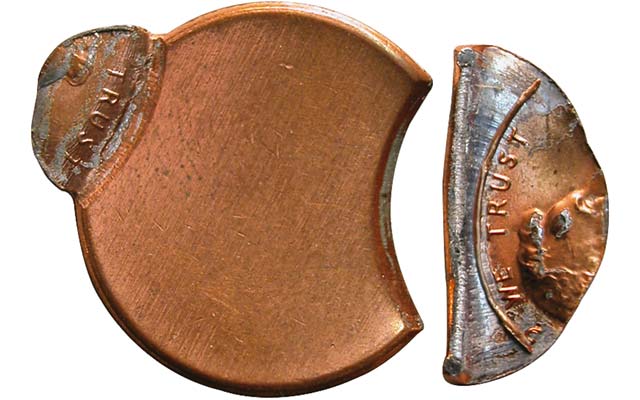 These two strike clips — one straight and one concave — show what may happen when a saddle strike fails to buckle and one of the off-center strikes is uniface. 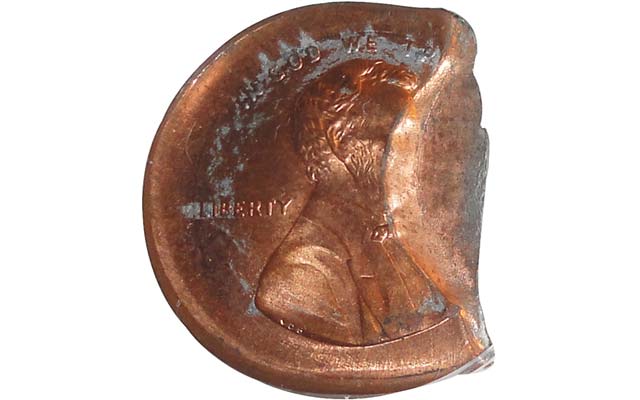 This Lincoln cent represents the “cap” of a “mushroom” indent. Tensile forces generated between the anvil die and an overlying planchet caused the “stem” of the “mushroom” to separate. 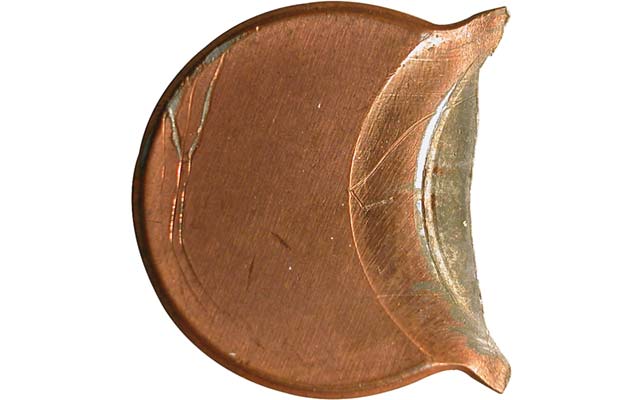 Tensile forces generated by the hammer die and an underlying planchet caused the struck tongue to separate from the rest of this cent planchet. 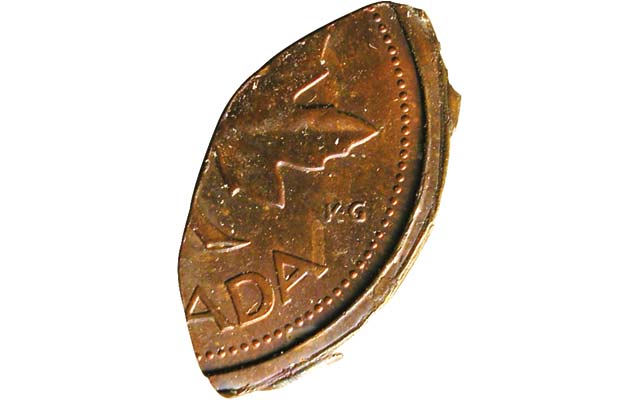 Strike clips arise when a coin or planchet is ripped apart in the striking chamber. Separation may result from vertical shear forces, horizontal shear forces, tensile forces, or combinations of the three. The line of separation may be concave, convex, straight, or uneven.

Previous columns (Aug. 25, 2008; April 5, 2010) considered one type of elliptical strike clip that is created when an off-center planchet is trapped between a descending hammer die and a collar frozen in the “up” position. The planchet’s protruding or exterior portion becomes a concave or crescentic strike clip while the interior portion becomes an elliptical strike clip. Both parts are preserved in the illustrated 1992 Lincoln cent.

A similar event is responsible for the polygonal strike clip on a 1982 Canadian cent. It was apparently sheared in two on the second strike between a stiff collar and a newly-struck cent clinging to the face of the hammer (reverse) die.

A saddle strike clip may form when one or both off-center strikes are uniface (struck against another planchet). The aggregate double thickness boosts the effective striking pressure and the radial expansion that ensues. If the midsection of the coin fails to buckle, then one of the expanding tongues has no option but to ride underneath the unstruck surface. Horizontal shear forces will first cause the corners of the tongue to tear, with the two tears eventually meeting in the middle. The result is a straight strike clip on the detached tongue and a concave strike clip on the remainder of the coin. A matched pair from two different saddle strikes illustrates the outcome of such an event.

Other types of strike clips are caused by tensile forces generated during indents and off-center uniface strikes. When struck under exceptional pressure, an indented planchet or coin assumes a mushroom shape. The “stem” of that mushroom can tear away from the “cap,” leaving both with a straight edge (see photo).

Strike clips that arise from tensile stresses are close cousins of “coin shrapnel” (Collectors’ Clearinghouse, Dec. 21, 2009). The latter term refers to fragments that break away from multi-struck coins, pile-ups, and disintegrating die caps. Tensile strike clips also share affinities with coins torn apart as the result of being struck through hardware or machine parts. Here we confine the strike clip moniker to those coins sundered in a single strike and where nothing but discs of coin metal were involved.

Collectors should be aware that many kinds of strike clips are erroneously described and encapsulated as “struck fragments,” “struck scrap,” and various types of conventional clips.