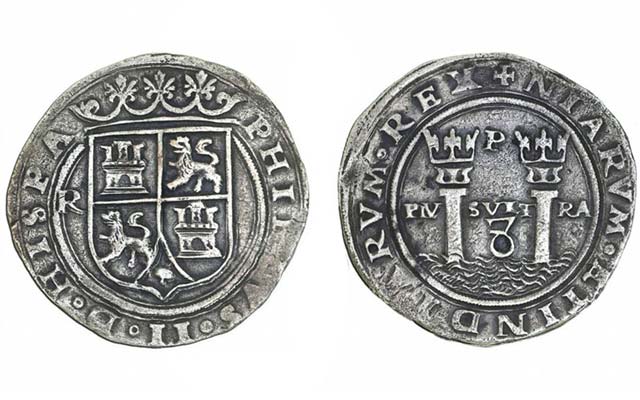 The coin was struck under assayer Rincon during the reign of Philip II, and was among a short series of silver 8-real coins struck at the Lima mint without authorization.

The silver 8-real coin is considered the parent of the U.S. silver dollar, as one example of the 8-real coin was worth one dollar. The 8-real coins were often cut into four pieces or "bits," and for that reason the term “two bits” came into use for quarter-dollar coins.

Three primary cob-producing mints functioned in the Americas — at Mexico City, Lima and Potosi — and each had an assayer named Rincon that oversaw production of very few silver 8-real coins.

The example offered by Sedwick entered the market for the first time, is unpublished and in fact was struck from previously unknown dies, the firm said.

The present specimen features a full motto of PLV-SVLT-RA (meaning “more beyond”) on the reverse, but also a new obverse die, with matching ornaments and correct spelling of the king’s name.

This new specimen is also among the finest of the issue, with no doubling or flatness of any significance, the firm said.

The surfaces do show traces of very light porosity (net Very Fine), but not to the point of significant weight loss, so Sedwick suspects that it was struck below standard to begin with, a problem known to have contributed to the rapid discontinuation of manufacture of these coins.

Other examples have sold for varying prices over the years.

The two best known examples include the piece commonly known as the “F.C.C. Boyd specimen,” which sold in the May 2008 Millennia auction by Ira & Larry Goldberg Coins & Collectibles for $240,000 plus buyer’s fee.

Three years later it was sold for $170,000 plus buyer’s fee, according to Sedwick, but the firm did not identify who was involved with this sale.