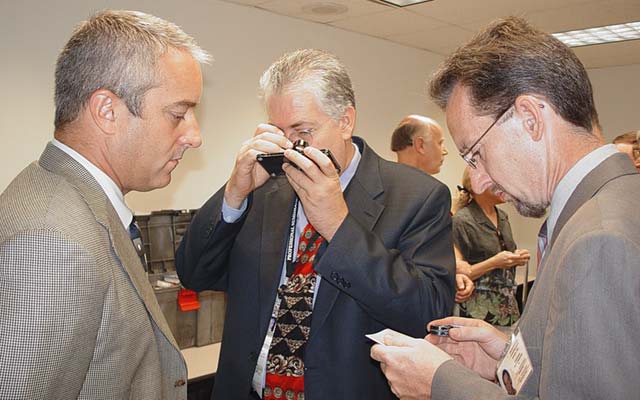 John Dannruether, center, puts a magnifying loupe to the George O. Walton 1913 Liberty Head 5- cent coin in July 2003 during the late-night authentication session for the coin. Dannreuther is flanked left by numismatist Paul Montgomery and numismatist Mark Borckardt, right, two of the remaining five numismatists who authenticated the coin as genuine. 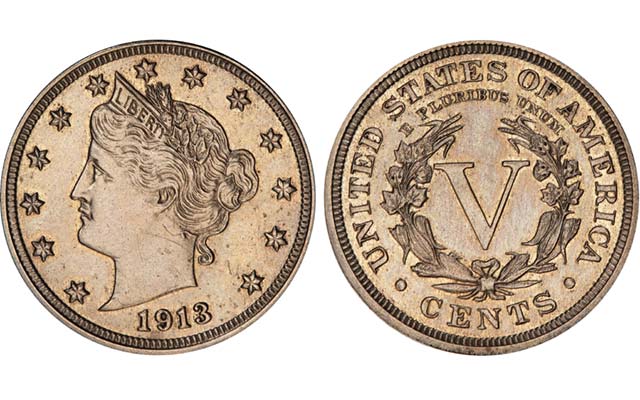 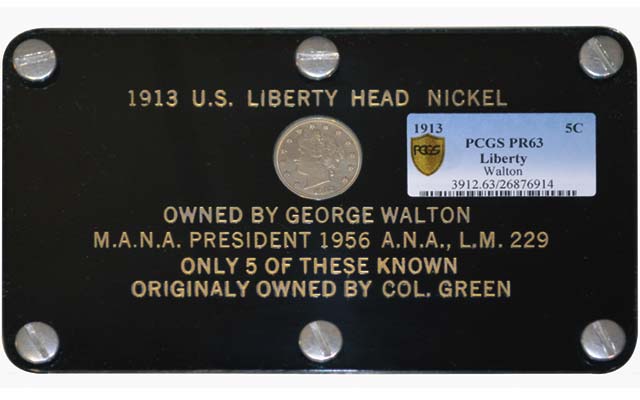 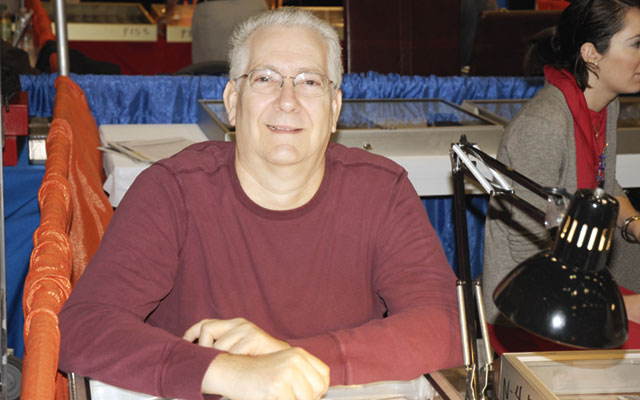 One of the co-founders of PCGS, Tennessee numismatist John Dannreuther is often sought out on the coin bourse for his expertise in early U.S. coin manufacturing technology. 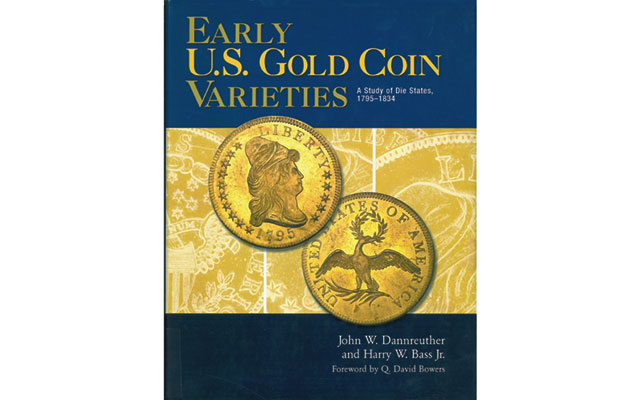 Dannreuther is the author of U.S. Gold Varieties, A Study of Die States, 1795–1834, the result of years of numismatic research. 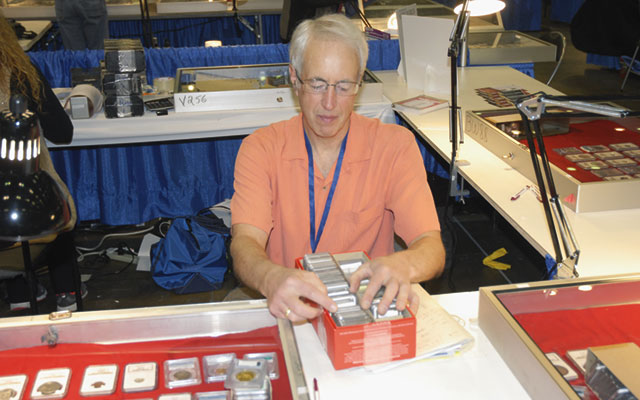 Tom Caldwell, from Northeast Numismatics in Concord, Mass., is celebrating his 50th year as a professional numismatist. 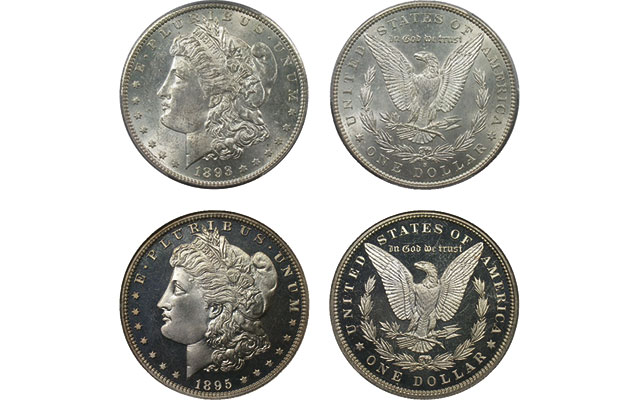 In the April Monthly issue of Coin World, I introduced a multi-part series on well-known coin dealers who have been in the hobby professionally for 40 or more years. Featured in the first part were Q. David Bowers, Larry & Ira Goldberg, Fred Weinberg, Jeff Garrett, Steve Ivy and Julian Leidman.

In this installment, which first appeared in the April 13, 2015, print edition, I look at the career paths taken by John Dannreuther and Tom Caldwell.

Tennessee dealer John Dannreuther was one of the six professional numismatists that formed the “dream team” that authenticated the George Walton example of 1913 Liberty Head 5-cent coin in 2003. He became a full-time dealer in the early 1970s.

“My father, Victor John Dannreuther, introduced me to coins around 1955, although I had collected stamps first,” Dannreuther said. “I was seven years old. Although I was fascinated by stamps, coins soon became my main interest. In 1956, my grandfather gave me the 1837 Reeded Edge half dollar (the only coin I still have from my early collecting days) that he had carried with him during World War I. For my tenth birthday in 1958, my parents gave me a five dollar gold coin.”

Dannreuther said he became a full-time dealer by family circumstances. His father was suffering from a deteriorating eye disease and asked John if he would start selling his coin collection, an effort that began in earnest in 1973. John, known simply as JD, was now a coin dealer.

“Today, breaking into the business as a dealer is very easy, as coins are now graded, guaranteed genuine, and encapsulated,” Dannreuther said. “Working for a major dealer is how most of the new coin dealers become successful. I was very lucky and became associated with some of the most successful dealers (Jim Halperin, David Hall, etc.) and they helped guide my career.”

Dannreuther considers the most interesting story of his career to be formation of Professional Coin Grading Service in the mid-1980s.

“David Hall, Gordon Wrubel, Bruce Amspacher, and I met for nearly two years at coin shows and discussed forming the grading service, although at first it was just a book project!” Dannreuther said. “I would say that the most important day in my career was the meeting [when] David Hall brought the first ‘slab’ .... That meeting was the real beginning of coin encapsulation. At that meeting, we all felt something really special. It is difficult to put into words, but we all left that meeting realizing that the coin business was going to be forever changed!”

“Trying to write the standards that PCGS was employing to grade the coins was quite a challenge,” Dannreuther said. “I had to think about the reasons a particular grade was assigned to a coin. This made me realize how hard it is to describe the grading process.”

A chance late 1960s encounter with an 1867 Shield, With Rays 5-cent coin that a teenaged Tom Caldwell received in school lunch money from his mother triggered a lifelong hobby interest and numismatic career.

Investigating, and learning that the 1867 Shield, With Rays 5-cent coin was worth $20 pushed Caldwell to delve further into numismatics.

Caldwell is president and owner of Northeast Numismatics in Concord, Mass., and is celebrating 50 years as a professional numismatist.

Caldwell said during the 1960s and 1970s, he took advantage of the numismatic knowledge available to him by attending meetings of the many local coin clubs that were then prevalent in the area around Littleton, Mass., including his high school coin club.

Caldwell established a coin shop in the basement of his parents’ home and took tables at local coin shows and flea markets.

“My early mentors were my parents, who, while having no knowledge of coins, were always there to encourage me, driving me around for years to virtually any location where I could indulge my numismatic passion and curiosity,” Caldwell said. “At around the same time, a regional show was established by Ed Aleo, and the Bay State Coin Show continues to thrive. Ed has been a longtime friend and early mentor, and we at Northeast Numismatics are proud to help sponsor this popular semiannual show to this day.”

Caldwell said he learned early in his professional dealings to treat potential customers equally, whether a young or novice collector just starting out or a seasoned hobbyist seeking to spend five or six figures on a coin purchase.

What drove the coin market 30 to 40 years ago was the building of coin sets without considering the investment component, Caldwell said.

Telemarketers and Wall Street investors took the hobby into different directions, transitioning the hobby from a pastime to a full-blown industry, Caldwell said.

The market has been significantly influenced by the plethora of numismatic products engineered and marketed by the nation’s largest coin dealer — the United States Mint, according to Caldwell.

“Up until 1982, a $10 bill would buy you every product the Mint produced, that being a Mint set and a Proof set,” Caldwell said. “Today you can spend $5,000 and not purchase half of the Mint offerings.

“At one point early in the certification era, some thought that all the available worthwhile coins would be graded, and the eventual degradation of the grading services would occur. Bulk grading, re-grading, the prominence of the internet, and the excessive Mint offerings have indeed changed any of those notions.”

Caldwell notes that most of the millions of coins graded annually by the major grading services are modern issues.

The introduction by Professional Coin Grading Service and Numismatic Guaranty Corp. of registry sets of certified coins has been popular with collectors and investors, continuing to “influence the market and prices for high end material.”

Caldwell notes along with other longtime hobbyists that the Internet and World Wide Web have had a major impact on numismatics.

“It’s difficult to imagine the industry nowadays without the prominent use of all the advantages the internet has to offer,” Caldwell said. “Needless to say, the web has become involved with nearly all of us on a daily basis in countless aspects of our lives both personally and professionally. Those of us in the rare coin business that have embraced advancing technology have been major beneficiaries, and have helped to move the industry further into prominence.

“At Northeast Numismatics we have had a web site (www.northeastcoin.com) since before the turn of the century, and this has become a necessary tool to stay competitive and reach buyers and sellers on an everyday basis. Long gone are the days of primary dependence on print ads in trade publications to reach customers.”

While coin shops were the place for collectors to build their collections, Caldwell believes that now only a small percentage of numismatic transactions take place in a storefront.

The cause: the Internet, Web and third-party grading. Increased technology allows for the online presentation of quality images that collectors can view in the confines of their home or office.

“This has played a significant role in internet buying, resulting in a dramatically increased confidence between buyers and sellers alike,” Caldwell said.

While local, state, regional and national coin shows still are important arenas where dealers, collectors, and investors can conduct business, public participation at shows has dropped off, he said.

“More buyers are going to dealer web sites as well as eBay and other auction venues,” Caldwell said. “Shows do, however, continue to serve as an essential outlet for dealers. It is probably fair to say that the majority of transactions are dealer to dealer at shows across the nation.”