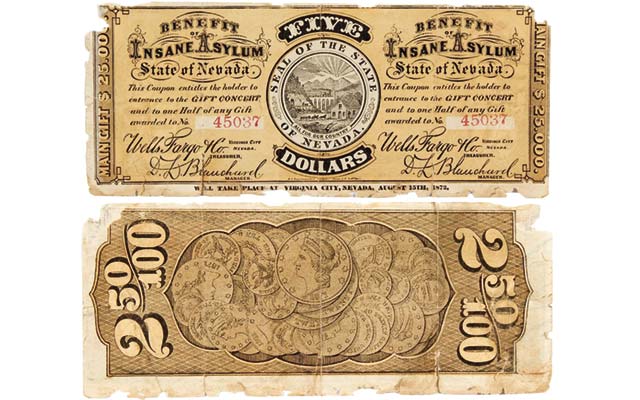 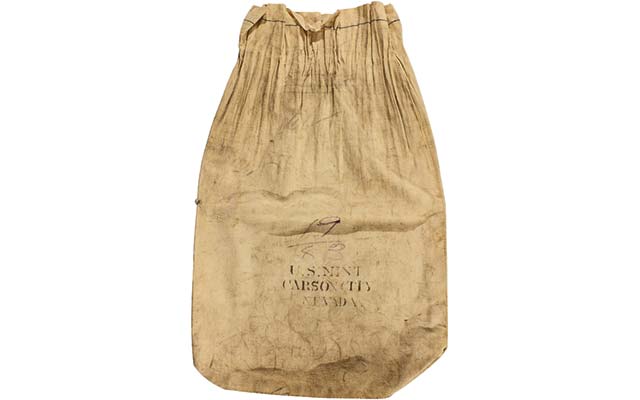 A 19-inch by 12-inch canvas bag used to hold silver dollars struck at the Carson City Mint in Nevada is one of three such bags being offered by Holabird Americana. 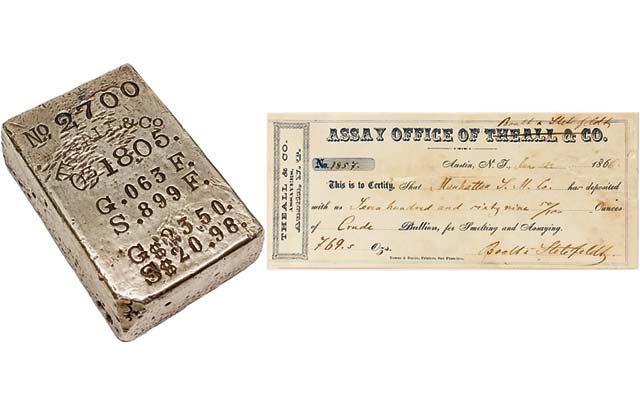 Circa 1864 silver ingot and assay certificate from Theall & Co., a Virginia City, Nev., assaying firm run Hiram Theall. The ingot is one of six silver ingots known extant from Theall’s assaying operations and the largest of the six known. 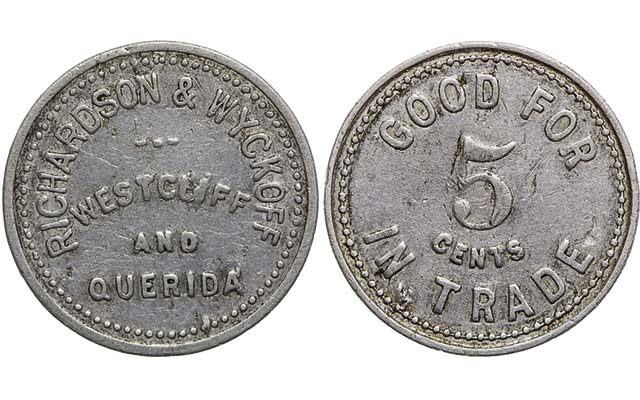 A $5 scrip note issued in 1872 to benefit the Nevada State Insane Asylum, one of six known silver ingots from Nevada assayer Hiram W. Theall and canvas bags that once held silver dollars struck at the Carson City Mint are among nearly 4,000 lots to be offered in April by Holabird Americana.

Holabird’s Western Prospects Auction is to be staged in multiple sessions with items from more than 20 collecting categories.

“Most of the material has somewhat low opening bids because collectors will have to establish the value,” said Fred Holabird. “There has never been a sale like this before.”

Complete details on the sale can be found online.

According to Holabird, the $5 scrip note was issued by the Virginia City, Nev., office of Wells, Fargo & Co.

The note’s face entitles the holder to entrance to a gift concert and to one half of a gift awarded to No. 45037. The back of the note bears vignettes of overlapping U.S. coins and is denominated $2.50 at each end.

The assaying business of Hiram W. Theall included Nevada operations in Virginia City, Austin and Hamilton, along with Marysville, Calif., where he was successor to Justh & Hunter. Theall was a native New Yorker who traveled to the California gold field during the Gold Rush.

The Theall & Co. silver assay ingot is the largest of six known Theall ingots. It is .899 fine silver, 0.63 fine gold, stamped with a value of $20.98 in silver and $23.50 in gold. There is no apparent city designation stamped into the ingot, according to Holabird.

The three canvas bags that once held silver dollars struck at the Carson City Mint are the first such examples to be offered by Holabird Americana.

The example illustrated nearby measures 19 inches by 12 inches.

The Carson City Mint executed its first production on Feb. 11, 1870 with the output of 1870-CC Seated Liberty dollars.

The Carson City Miny ceased coining operations in 1893, and the presses were removed six years later.

The Richardson & Wykoff Good for 5-cents in trade aluminum token is believed to be unique. It is a two-town token from the mining region of Custer County, Colo., reflecting the towns of Westcliff and Querida.

Westcliff is also found identified as West Cliff and Westcliffe.