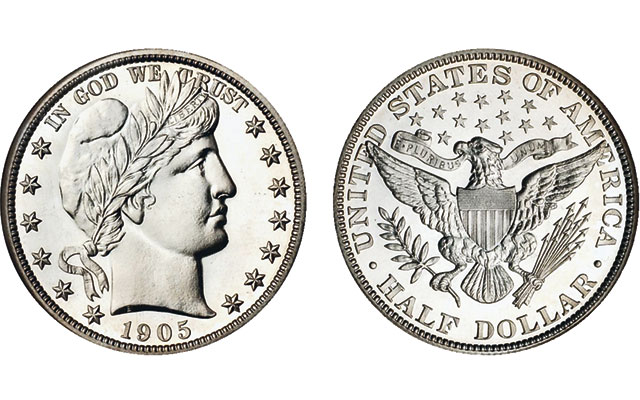 A beautiful Proof 1905 Barber half dollar — ideal for buying lunch on a train at the time (see story).

Starting in the early 1950s when I discovered the world’s greatest hobby, numismatics, reading about the history and tradition of coin collecting became a prime interest.

B. Max Mehl, the famous Fort Worth, Texas, dealer, became a friend, and we had a number of conversations prior to his passing in 1957. One memorable evening he, Abe Kosoff, Abe’s wife, Molly, and I had dinner together at an American Numismatic Association convention. By then we had become acquainted through letters and telephone calls.

During one conversation, we discussed Barber silver coins — the dimes, quarter dollars and half dollars designed by Chief Engraver Charles E. Barber and minted from 1892 to 1916. I mentioned that as a dealer I had recently purchased a group of Barber dimes that Mehl had sold around 1908 or 1909. The paper envelopes were marked just with dates such as 1901, 1902, and so on.

Upon inspection some coins had Mint marks. I asked about that and Mehl replied to the effect, “Most collectors just wanted dates, and modern Mint marks were not very important then.”

He also mentioned that around that time he was on a train trip and in going to the dining car he forgot to take money with him. He did have a briefcase of rare coins. When he received his bill he extracted a Proof Barber half dollar and used it to buy lunch! Of course, back then such a coin was not worth much over face value.

Starting in 1954 and continuing into 1955, I commenced building a set of Proof Barber half dollars. The typical date cost about $7 to $9 then. From circulation, I could find well-circulated Barber half dollars from time to time, but hardly any dimes or quarter dollars. In 1957, I paid the record price of $4,750 for a beautiful Uncirculated 1894-S dime, a coin for which 24 were minted and just eight (not nine) are known today.

Recently, I have been completing A Guide Book of Barber Silver Coins for Whitman Publishing LLC. I plan to deliver the manuscript within a month or so. Publication will probably be this summer. In doing so I have been drawing upon files I have kept for over 60 years.

This is part of a broad effort for a number of books that have been incubating for some time. If you have any information on old-time hoards or caches of Barber coins, send me a note.