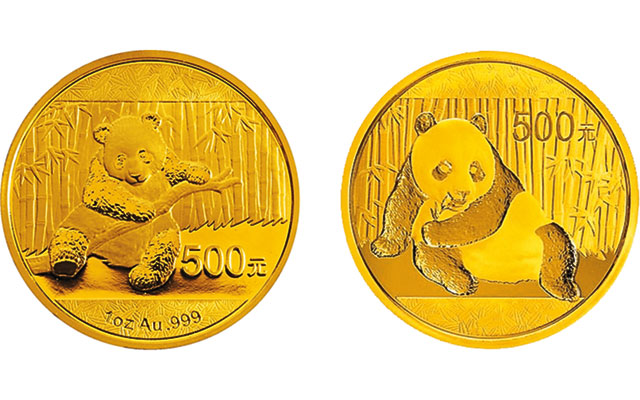 Beginning with the 2015 Chinese Panda bullion coin, right, the weight, fineness and metal inscriptions that usually appear on the coin’s reverse are absent. A 2014 coin of the same denomination and size appears at left for comparison. 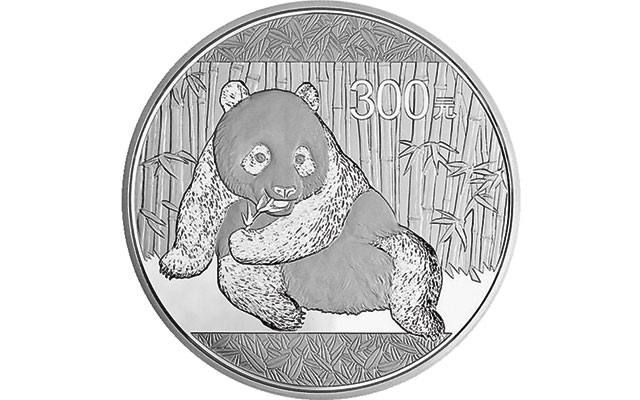 The release of the 2015 Panda silver and gold bullion coins and related Proof collector offerings might be notable for what the coins don’t contain.

The 2015 Panda coins lack inscriptions confirming their metal content, weight and fineness. Since 1983, China’s Panda coins have included these inscriptions on the reverse, and since 2009 the wording has been located below the oft-changing panda design.

According to a representative of the firm that sells the coins in the U.S. market, the inscriptions were removed from the designs, according to his sources.

The 2015 program is being released during the Beijing International Coin Exposition Oct. 24 to 26.

While other Chinese collector coins do not contain such markings, the Panda coin series at its core a bullion program and markings with weight, purity and alloy are commonly included on world bullion coins. The lack of inscriptions may make it easier for collectors and dealers to be fooled by counterfeit coins.

The designs for the 2015 Panda coins were unveiled over the weekend of Oct. 17 to 19, according to William Graessle, vice president of sales with PandaAmerica, a U.S. distributor of Chinese coins. The reverse of the 2015 coins shows a single panda nibbling on a stalk of bamboo, in a stand of bamboo. Bamboo leaves fill the areas above and below the central design.

The core of the Panda program is 1-ounce silver and 20th-, 10th-, quarter- half- and and 1-ounce gold bullion coins, with various larger silver and gold coins struck in Proof.

Designs released by China Great Wall Coins Investment Ltd. indicate that the inscriptions have been removed from both bullion and Proof Panda coins, whether struck in silver or gold.

Graessle said the removal of inscriptions might pave the way so that Panda bullion coins could be struck in weights in even grams to satisfy the domestic Chinese market.

China’s mints might not wait until the launch of 2016 coins to change to even-gram weights, Graessle said, and such a change could take place beginning with the 2015 Year of the Goat coins, which are being unveiled during the Beijing show.

“Right now we don’t know that,” Graessle said. “They haven’t made that clear. I guess we’ll know next week.”

The specifications of the 2015 Panda program have not been released in English, though a translation of a Chinese-language posting at collector website www.jibi.net suggest that the 2015 Panda coins are struck in their standard, troy-ounce-based weights.

If the weights of China’s Panda coins are changed in the future, there is going to be a backlash, Graessle said.

Details of the 2015 Panda coin program in English are scarce, though rumor is rampant on collector forums in both English and Chinese. Graessle indicated that the Chinese market always receives earlier access to new Chinese coins, but PandaAmerica expects to begin selling the Panda coins once stock is in-house in a few weeks.

Coin World will report on the Panda program as more details are available.