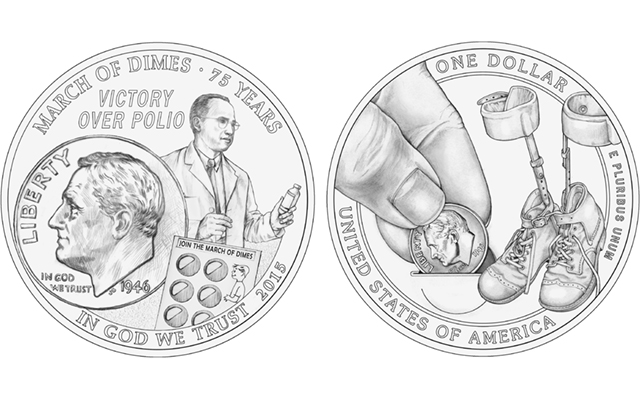 The Commission of Fine Arts recommended May 15 the proposed designs above for the 2015 March of Dime silver dollar. It was recommended the dime board on the obverse be moved to the reverse, replacing the two fingers.

The Commission of Fine Arts recommended proposed obverse and reverse designs for the 2015 March of Dimes commemorative silver dollar during its May 15 meeting.

The recommended obverse features the Roosevelt dime, Dr. Jonas Salk, and a dime board. Dr. Salk discovered the anti-polio vaccine and the dime board was used to collect contributions to the March of Dimes. The CFA recommended removing the dime board from the proposed obverse.

The recommended reverse features two fingers and a thumb grasping the edge of a 1946 Roosevelt dime to place it in a March of Dimes donation card. To the right is a pair of empty children’s polio braces. The large size of the fingers and card slot symbolizes the power of thousands who gave their pocket change to a good cause, according to the Mint, and the empty leg braces celebrate the victory over polio.

The commemorative silver dollar, with a maximum authorization of 500,000 coins combined in Proof and Uncirculated versions, is authorized under provisions of the March of Dimes Commemorative Coin Act of 2012, Public Law 112-209.