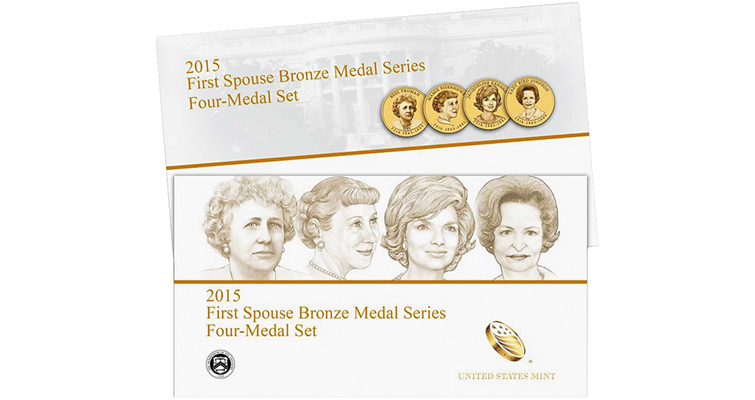 The U.S. Mint will launch sales at noon Eastern Time Sept. 21 for the four-piece 2015 First Spouse bronze medal set, limited to a product release of 20,000. 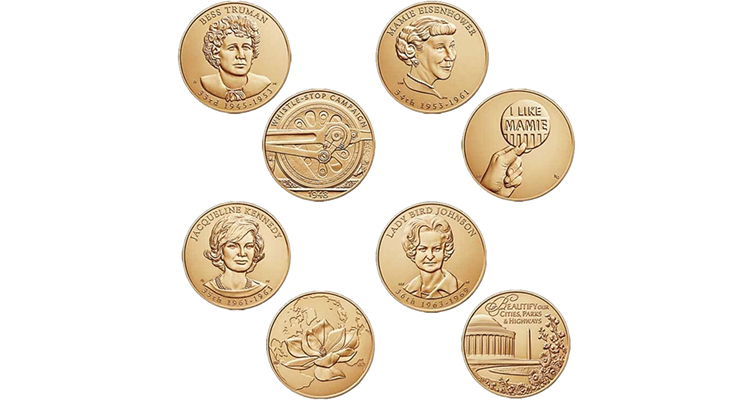 All of the First Spouse bronze medals bear the same designs as the 2015-W First Spouse $10 gold coins, but without the coin inscriptions.

The sets contain one each of the 1.3125-inch bronze medals replicating the First Spouse $10 gold coins designs for Bess Truman, Mamie Eisenhower, Jacqueline Kennedy and Claudia "Lady Bird" Johnson, but without coin inscriptions.

??Jacqueline Kennedy: Reverse features the species of saucer magnolia Mrs. Kennedy chose to be planted in a White House garden and near the eternal flame at her husband’s grave at Arlington National Cemetery. The flower's petals stretch across the globe, their tips connecting the points of some of her most notable diplomatic visits. The design also represents the beauty she brought into the world through her support of the arts.

??Lady Bird Johnson: Reverse depicts the Jefferson Memorial, Washington Monument and flowers, in reference to Mrs. Johnson’s efforts in the beautification and conservation of America, starting from Washington, D.C.

The medals are packaged in Mylar, inserted into a folded card containing product information, and placed in a custom-made envelope.

The set is also available through product enrollment.