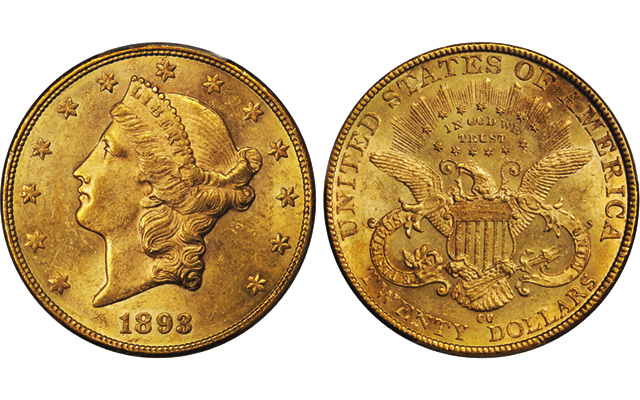 An 1893-CC Coronet gold $20 double eagle from the last year of production at the Carson City Mint in Nevada.

The mines and mills of the Comstock Lode 15 miles from Carson City provided the metal for coinage. How convenient! Why, then, was most of this precious metal shipped to the San Francisco Mint 240 miles away? The Annual Report of the Director of the Mint, 1887, summarized the problem:

“It will also be shown that the mint at Carson has at no period of its history received considerable deposits from the mines of the Comstock Lode, their product having continued to be sent to San Francisco for coinage, the same as before the establishment of that mint. It will appear, indeed, that very important considerations, now affected by the cost of transportation of bullion, specie, and currency to and from Carson, are most unfavorable to the operations of coinage at the mint, and even to the minor operations of an assay office now carried on at that institution.”

As much as we dearly love Carson City Mint coins today, there was no interest in them by numismatists until the end of operations. In 1893, Augustus G. Heaton suggested that readers of his new Mint Marks book could order Carson City Mint coins directly from the source. It was almost too late. John M. Clapp of Tidioute, Pa., a prosperous oil man, ordered a full set. He may have been the only one to have done so.

The facility is best remembered for the Morgan dollars made there, produced by the millions to satisfy the requirements of the Bland-Allison Act, a political boondoggle deluxe. The coins were neither needed nor wanted in commerce.

Most of them were stored, only to be dispersed in quantity by the Treasury Department from the 1950s until they were all gone.