Emperor Norton - the man, his money and a bridge 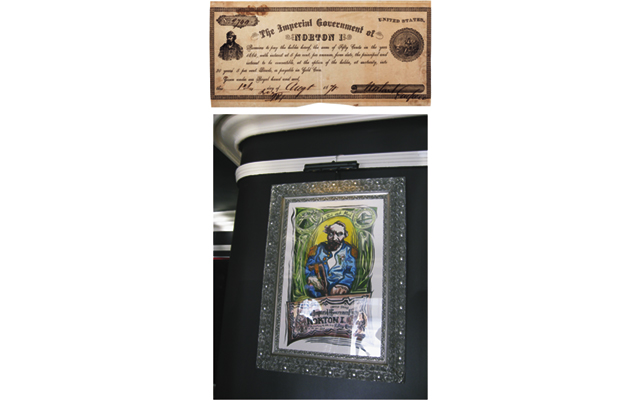 Top, an example of a rare 50-cent scrip note issued in 1878 by the self-proclaimed Norton 1, Emperor of the United States and Protector of Mexico. Below, the San Francisco bar, Emperor Norton's Boozeland, has a painting of Norton on view to spur customers to support the Emperor's Bridge Campaign.

Californians of a new generation are being introduced to his majesty, Emperor of the United States, Norton I — the nation had an emperor? — through a campaign to rename the San Francisco-Oakland Bay Bridge in his honor.

The idea is the brainchild of John Lumea, who started The Emperor’s Bridge Campaign and is now organizing paperwork to incorporate the campaign as a 501(c)(4) nonprofit membership organization.

So who was Emperor Norton?

His life began as Joshua Abraham Norton, and he arrived in San Francisco as a businessman from South Africa in 1849 to get in on the California Gold Rush.

He also decided to invest his $40,000 inheritance in a shipload of rice, so he could corner the market in a city with a large Chinese population.

Unfortunately for his investment returns, the same day his shipment of rice arrived, so did three other ships carrying rice. The abundance of rice destroyed Norton’s plans as well as his financial standing, and possibly his emotional state.

He left the city for a few years and then returned to proclaim himself “Emperor of the United States and Protector of Mexico.”

By royal proclamation, Norton fired President Abraham Lincoln and the Congress and, as well, dissolved and abolished the Democratic and Republican parties.

San Francisco officials and everyday citizens seemed to embrace this eccentric man. During his "reign," Norton ate in the best restaurants for free, was saluted by the local police officers and was much loved by the community.

Norton was allegedly accompanied by two stray dogs someone named Bummer and Lazarus. The mutts followed Norton for the scraps often provided at local restaurants who honored Norton’s own specially printed paper money.

This specially printed paper money provides Norton's numismatic connection. He issued the “notes” for 10 years beginning in 1870, all signed Norton 1, Emperor. The notes were issued in denominations of 50 cents to $100 and promised to pay the bearers interest.

Unfortunately for the owners, the notes proved to be unredeemable, as Norton died Jan. 8, 1880. More than 20,000 people attended his funeral.

So what does this all have to do with renaming the bridge?

In 1872, in one of his many proclamations, Norton ordered that a bridge be built from Oakland Point to Goat Island (Yerba Buena) and then on to Telegraph Hill in San Francisco.

He was obviously a visionary, because the San Francisco-Oakland Bay Bridge, covering that very span, opened in 1936.

Several past attempts to rename the bridge never got off the ground. But in 2013 a discussion came up about renaming a portion of the bridge after San Francisco Mayor Willie Brown.

The bar kicked in $2 for every purchase of Emperor Norton Absinthe Dieu and Bummer & Lazarus Gin, both handmade on Treasure Island by Raff Distillerie. Altogether $325 was raised, according to Lumea.

For more information on the campaign visit its website.