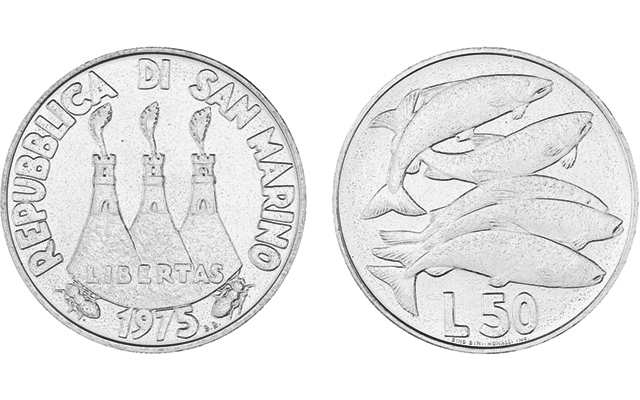 These salmon from the San Marino 1975 “Love Set” symbolize love of country. The 2-lira coin from the same year has a pair of seahorses that symbolize “love between mates.” 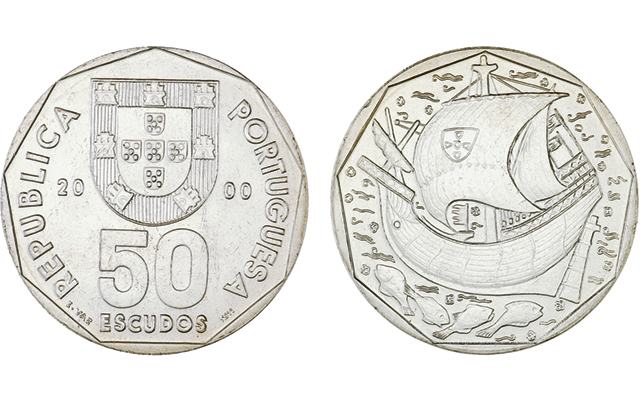 Portugal has a long history of putting ocean-related scenes on its coins, like this fish and ship 50-escudo piece from the year 2000. 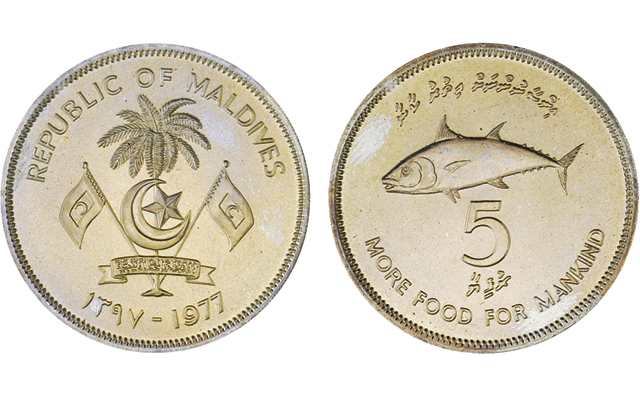 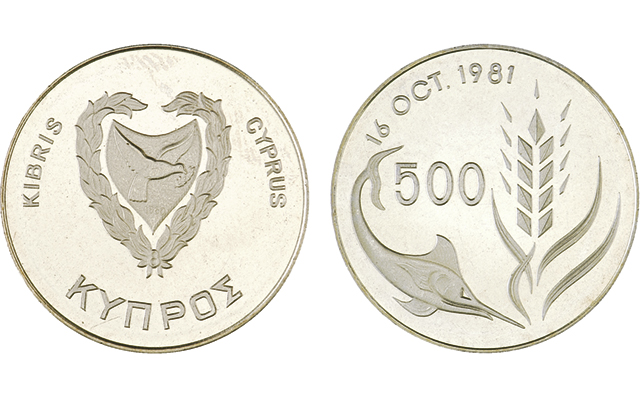 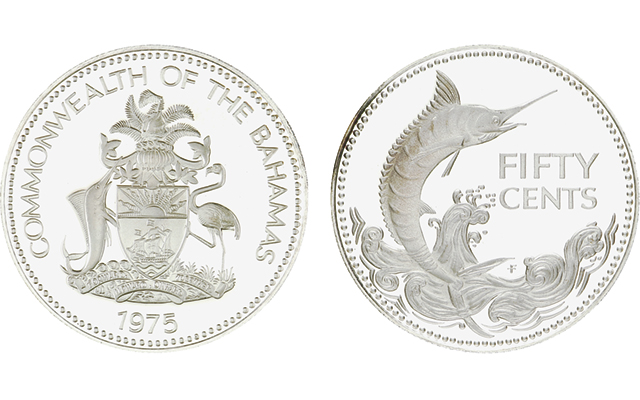 Fishing for blue marlin has been popular in the Bahamas since the 1920s but the large billfish is now endangered. The Bahamas began showing the fish on its 50-cent coin in 1966, where it remained for three decades. 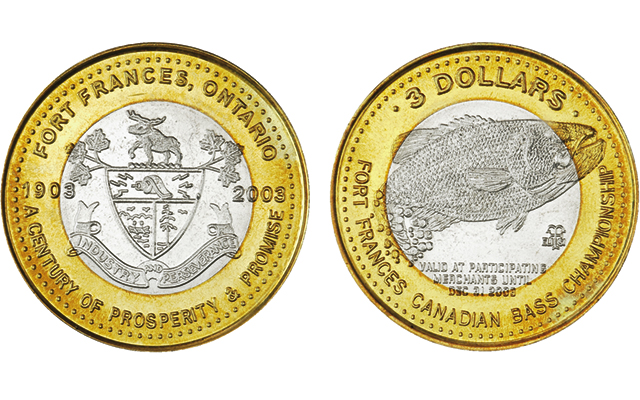 This $3 piece is actually a municipal trade token. The bass on this ringed bimetallic 2003 Fort Frances, Ontario Bass Championship trade token has highly detailed scales. Canada is also famous for its 1967 mackerel 10-cent coin, not shown. 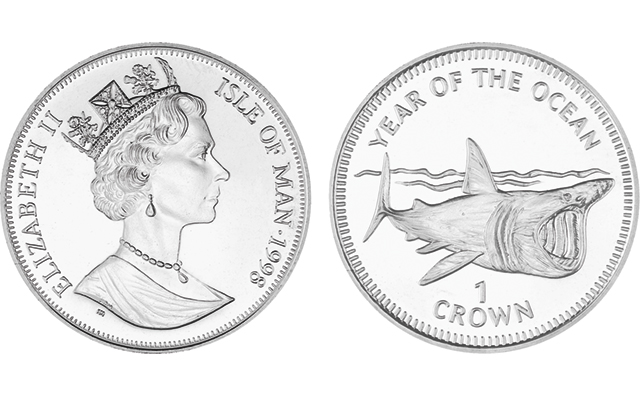 To celebrate the Year of the Ocean, the Isle of Man issued an unusual coin in 1998 featuring a feeding basking shark, the second largest fish on earth. 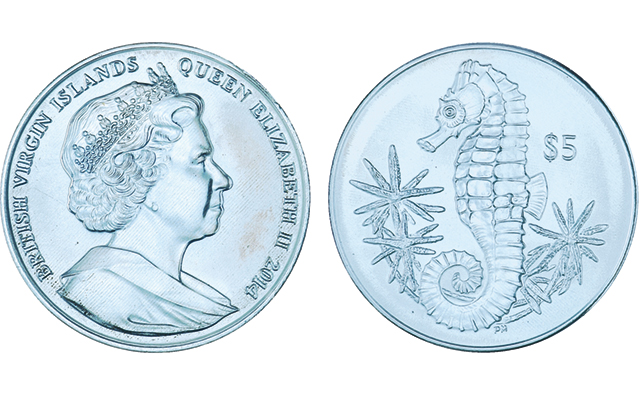 This 2014 Seahorse $5 coin from British Virgin Islands is made from aqua blue titanium that creates the illusion of water. Only 5,000 of these colorful coins were issued.

Animal coins with sea mammals on them, such as whales and dolphins, get a lot of attention, but fish coins have a following as well, and this column features some particularly beautiful ones.

Ocean mammals such as dolphins, whales and seals have long enjoyed a strong following among animal coin collectors. However, fish are growing in popularity as more and more nations feature them on coins. Fish appear in contexts such as food, sport fishing, native fauna, and as symbols of national pride and conservation.

In 1975 San Marino used salmon on a 50-lira coin in a unique way: To symbolize “love for one’s native country.” The official government description of the design reads: “Five salmons are swimming in the same direction. They have spent the rest of the year in the sea; now they are returning up the river they came down soon after birth. They are using every energy they have to go upstream against the strong-willed current to thus obey that mysterious call ... which draws them to their birthplace.” The other love symbols in the animal coin set include sea horses, spiders, marmots, birds, dogs, cats, seagulls, and hedgehogs.

The Portuguese love the sea, source of food, transportation and adventure, and this shows in their coinage. Seascapes, sailing vessels and fish are often found on the coins of this coastal nation to symbolize its strong connection to the Atlantic Ocean. A “fish and ship” design graced its 50-escudo coin from 1986 until 2002, when the nation adopted the euro.

The vital role that fish play in the food chain was highlighted in a simple design on the one-year-type 1977 Maldives 5-rufiyaa coin.

The bonito fish is part of the tuna family and is sometimes substituted for tuna in recipes. The Greeks enjoy it pickled but it is typically eaten grilled. The bonita’s role as a food fish is why this coin was part of the FAO’s “Grow More Food” coin program.

In honor of that occasion, Cyprus issued a 1981, one-year-type 500-mil coin featuring a swordfish and grain. The swordfish is not only a sought-after catch with anglers, it often shows up on lists of the world’s tastiest fishes.

For many fish fanciers, nothing’s better than a swordfish steak. But these huge fish are also fascinating to watch. They don’t use their swords to spear prey but rather to injure them by slashing to make the smaller fish easier to catch.

The swordfish has made a great comeback in U.S. Atlantic waters but is endangered in most other parts of the world.

The bass is another fish that people like to catch as much as they like to eat. Famous catch and release bass fishing tournaments in North America include the Bassmaster Classic, Collegiate Bass Fishing Championship, and the Fort Frances Canadian Bass Championship held annually in Ontario, Canada. The Ontario event, with a $50,000 first-place prize, attracts contestants worldwide.

For 2003, Fort Frances issued a $3 trade coin token valid as local legal tender until year’s end. The municipal trade token or MTT, is a popular type of exonumia throughout Canada. The bass on this MTT has highly detailed scales. In addition to the crest and Fort Frances motto of INDUSTRY AND PERSEVERANCE, this token celebrates the city’s centennial with the inscription A CENTURY OF PROSPERITY AND PROMISE.

Fishing for blue marlin has been a favorite activity in the Bahamas since the 1920s. They honored the giant billfish with a 50-cent coin beginning in 1966 (and continuing until 1996). In The Old Man and the Sea, Ernest Hemingway writes about a fisherman’s three-day-long battle with a single Atlantic blue marlin off the coast of Cuba. Like swordfish, marlin are also a tasty food fish and they are a threatened species.

Sharks are featured on the coins of Australia, Niue, Tuvalu, Palau, and Keeling Cocos. Many of these look quite fierce. By contrast, the basking shark on the 1998 Isle of Man crown is just plain fascinating. With its giant mouth wide open, this harmless slow-moving plankton feeder is amazing to behold. The only fish that is larger than this one is a close relative, the whale shark. Isle of Man designed this coin to celebrate the Year of the Ocean.

Fish coins have benefited from the latest technological advances.

The British Virgin Islands’ 2014 Sea Horse $5 coin is made from aqua blue titanium that creates the illusion that the coin is made of water. Ever since Gibraltar issued the world’s first titanium coin in 1999, the metal has become more and more popular in the commemorative coin world. Paired with other metals in ringed-bimetallic pieces and issued in a rainbow of colors, the tough as steel but lightweight metal is well suited for coinage.