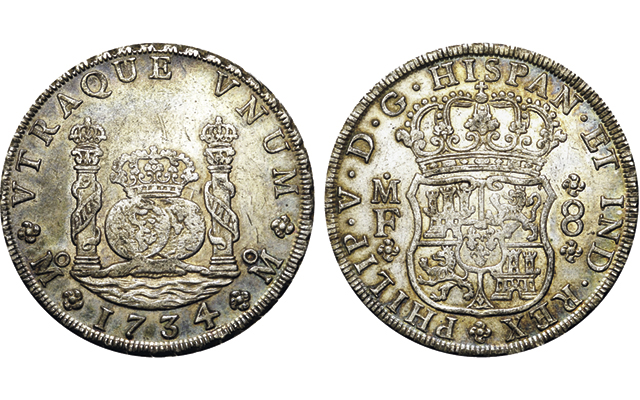 If there’s one classic Mexican coin that makes its way into U.S. coin collections, it’s the Pillar dollar or “piece of eight” struck at the Mexico City Mint in the 18th century.

The design features two globes, representing the Old and New worlds, between pillars, under a crown. The Spanish arms and denomination are found on the reverse.

Pillar dollars were struck across South America under Spanish colonial rule and circulated widely in early America, and across the globe. Although the Pillar dollar was of foreign origin, it was legal tender in the United States until the Coinage Act of 1857 was passed.

It’s collected as a world crown (a large silver coin), coins popularly branded in the mid-20th century as “silver dollars of the world.” Crowns get their name from the British denomination of a crown, which equalled 5 shillings.

To U.S. collectors, the Pillar dollar, the 8-real coin struck between 1732 and 1772, is possibly the most iconic foreign coin of the 18th century. Handsome, common examples from the Mexico City Mint in Very Fine condition can sell in online auctions at the $150 to $200 level.

Perhaps the ultimate Pillar dollar for a U.S. collector was offered at Heritage’s Jan. 15 auction of the world coin portion of the Eric P. Newman Collection. The 1834 Pillar dollar graded About Uncirculated 58 by Numismatic Guaranty Corp. had a modest estimate, but the coin’s rainbow toning and the provenance carried it to $2,350.

Bust type 8-real dollars were struck from 1772 to 1825 and also circulated widely around the world. These are generally less expensive than their Pillar dollar counterparts. A solid Very Fine example might cost $75 to $90 in an online auction while one with impaired surfaces — such as one that was found in a shipwreck — may be purchased with a bit of searching for under $50.