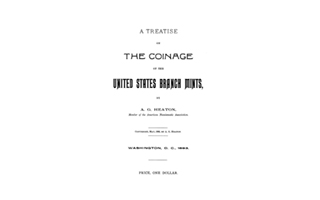 The title page from A.G. Heaton's groundbreaking work, A Treatise on the Coinage of the United States Branch Mints, opened the collecting world to the idea of collecting by Mint mark.

The entire history of American numismatics can be neatly divided into two eras, one before and the other after Augustus Goodyear Heaton’s A Treatise on the Coinage of the United States Branch Mints, better known as Mint Marks.

Prior to its 1893 publication, few collectors cared whether American coins had been struck in the main Mint at Philadelphia, or at one of the branches. Most numismatists collected by date; a Mint mark was irrelevant.

In fact, the 1890 catalog of the great Loren Parmelee Collection was cataloged not by denomination, but rather by date (all coins struck in all metals in a single year, then on to the next year). Mint Marks changed everything.

Heaton was a renowned painter, with two of his canvases reproduced on American commemorative stamps.

He started collecting coins by dates, but as his silver set neared completion, he sought new challenges, and found them in collecting Branch Mint coins.

In Mint Marks, Heaton listed 17 “Causes of Attractiveness” for Mint marked coins, ranging from the undeniably true (No. 5: “Mint marks can transform common dates into rarities”) to the debatable (No. 6: “Mint mark study gives a nicety of taste”).

Noting that there were no guidebooks to Mint marked coins, Heaton decided to provide one.

To that end, he studied old Mint annual reports, and examined the stocks of 20 coin dealers across the United States, to confirm the existence and estimate the rarity of Branch Mint issues from 1838 to 1892. As of 1893, no cents had ever been struck at a Branch Mint, so he focused on silver and gold coinage, and did a thorough job.

His study of Branch Mint output also allowed him to discover that some issues from the Philadelphia Mint were underappreciated rarities, such the 1864 Seated Liberty half dime and the 1842 Seated Liberty quarter dollar.

Pioneering work, however, is always fraught with uncertainty; he was unable to determine if some dates, such as an 1873-S Seated Liberty, Without Arrows half dollar, were struck at all. Heaton laid the groundwork for appreciation of Branch Mint emissions, which became evident when their first cents — 1908-S and 1909-S Indian Head cents and the 1909-S Lincoln, V.D.B. cent — became popular shortly after issue.

Original copies of Mint Marks command several hundred dollars at auction. A 1987 reprint is commonly available for around $10.

It is well worth the cost, for what Heaton had to say about Mint marked coins is equally true of his book: it “… will be found worthy of the enthusiasm of both the young collector and the most advanced numismatist.”