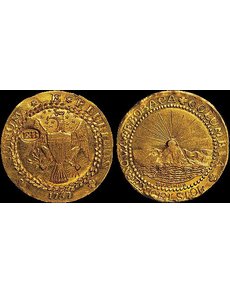 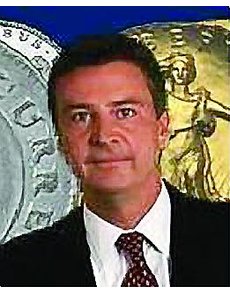 Monaco Rare Coins’ Adam Crum says he has dreamed about what it would feel like to own a 1787 Brasher doubloon ever since reading about an example in 1979 while he was a high school student.

Crum and business partner Michael Carabini purchased the same coin Crum had read about in 1979 for $4,582,500 as the first lot in Heritage Auctions’ Platinum Night session Jan. 9. The auction was held in conjunction with the Florida United Numismatists Convention in Orlando.

While admitting “every coin has its price,” Crum said Jan. 14 that he and Carabini have no immediate plans to resell the coin.

“We’re very happy with our purchase,” Crum said. “I’m very biased toward gold. It’s the finest known of its type by a mile and the first American gold coin. It’s definitely a trophy coin that exceeds and transcends our hobby.

“It ranks up with the most valuable coins in existence.”

The Brasher doubloon Crum purchased last appeared at public auction in Rare Coin Company of America’s July 27, 1979, segment of Auction ’79, where it was purchased by Chicago numismatist Walter Perschke for $430,000. That price included a 10 percent buyer’s fee.

Perschke has owned the coin since the 1979 sale.

The coin’s grade was described as “Almost Uncirculated” in the 1979 auction. Numismatic Guaranty Corp. certified the Brasher doubloon as Mint State 63 in June 2012 and the coin subsequently was stickered by Certified Acceptance Corp.

Some speculators in numismatic circles, especially Perschke, anticipated that the doubloon could sell for as high as $8 million to $10 million. Heritage estimated the coin as bringing “$5 million or more.”

“Every Heritage auction contains some bargains and some run-away prices, that’s the nature of auctions, and FUN 2014 was no exception with its record attendance and $90 million in sales,” Heritage President Greg Rohan said Jan. 15. “I’m pleased to report that, despite being the largest numismatic auction of all time, the market absorbed this auction easily and our consignor feedback has been overwhelmingly positive.”

Waiting in the wings

Crum said he was in the hallway outside the auction room during the bidding for the coin, on his phone with Heritage’s executive vice president, Todd Imhof, with whom he had placed his bidding instructions.

There was a bidding ceiling, but Crum said he was willing to exceed that limit to acquire the coin. It proved unnecessary. The $3.9 million final bid was sufficient to win the coin.

Crum said his excitement over making the winning bid made it difficult to get to sleep the night of the sale.

After Heritage officials acknowledged payment of the funds for the doubloon the afternoon of Jan. 10, Crum took possession of the coin.

The coin was on display for several hours in Monaco Rare Coins’s display case on the FUN bourse before being removed and shipped by Brink’s back to Monaco’s premises in Newport Beach, Calif.

Crum said arrangements were being made to display the doubloon Feb. 27 to March 1 in Atlanta at the ANA National Money Show and Aug. 5 to 9 at the ANA World’s Fair of Money in Rosemont, Ill.

Crum said he was trying to arrange the display of the coin, if possible, at the Long Beach Coin, Currency, Stamp & Sports Collectible Show Jan. 30 to Feb. 1 in Long Beach. Calif.

In total, Heritage’s auctions of coins and paper money at the FUN convention realized more than $90 million. ¦