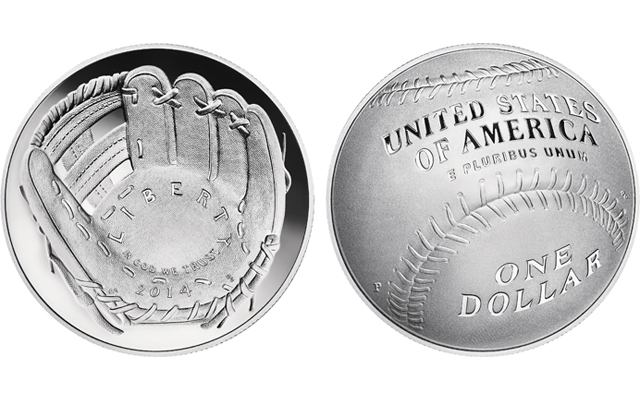 The U.S. Mint’s 2014 Proof (shown) and Uncirculated silver $1 for the National Baseball Hall of Fame was popular with collectors, with all 400,000 examples sold. 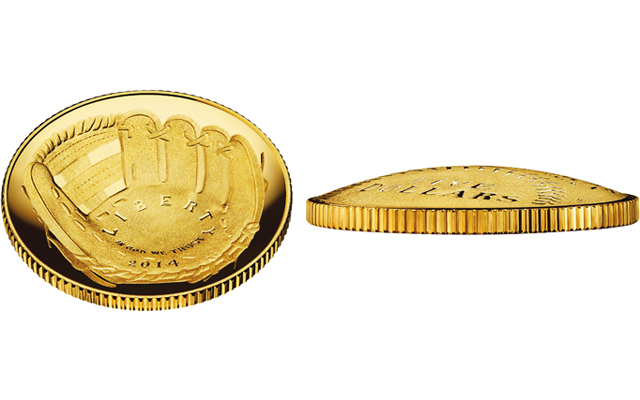 The baseball coin program brought technological innovation to U.S. coins as the Mint was mandated by legislation to strike the coins with concave/convex shapes.

In baseball parlance, the U.S. Mint hit a walk-off grand slam with its three-coin program celebrating the National Baseball Hall of Fame in 2014.

The gold $5 half eagle sold out of its maximum authorization of 50,000 coins within four days of the start of sales.

The silver dollar’s maximum authorization of 400,000 coins was reported sold out within the first two weeks of sales. Late in December, the U.S. Mint briefly put 3,500 examples of the silver dollar back on sale, due to order cancellations, and those quickly sold as well.

Prices in the secondary market spiked for the silver and gold issues, with major grading services and private companies scuffling to issue dozens of types of special grading insert labels with baseball players’ signatures.

A limited number of coins were sold at a coin show in Baltimore, and some of them were quickly encapsulated and offered for resale, with prices for those coins soaring immediately after release.

Average retail prices for examples of the gold coin in original packaging or encapsulated by grading firms soon nearly doubled the issue price. Silver coin prices also increased, to double their issue price and beyond.

Prices have settled in recent months.

Besides celebrating the sport that has been described as “America’s national pastime,” another factor of the coins’ success was the technological breakthrough they represented — the congressional legislation for the program mandated that the U.S. Mint strike the silver and gold coins with a concave and convex shape.

The obverse is struck concave while the reverse is convex.

During the design process, complementary designs were chosen, with a baseball glove cupped on the obverse and a baseball rounding the reverse.

While such coins are common in world coin production, the concave/convex shape posed new challenges to the U.S. Mint, which had to develop new technologies to meet the challenge.

Instead of merely following the law, the Mint exceeded its mandate, striking even the Proof and Uncirculated 2014 National Baseball Hall of Fame copper-nickel clad half dollars in the concave/convex shape. The clad coin’s mandated mintage limit was 750,000 coins.

The Mint’s Dec. 28 sales report indicates sales of only 436,163 of the half dollars through that date; however, the coin was taken off sale shortly before that sales report update.

The special shape and simple, complementary designs are some reasons the program was a real “hit” with collectors.