2014 gold Kennedy half dollar likely has an oil stain 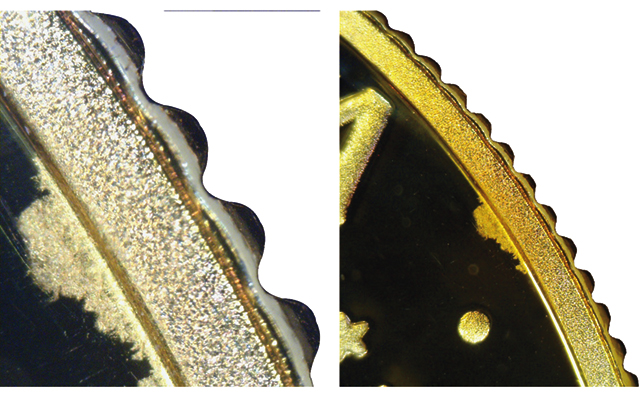 The defect as seen on collector Pat Scoleri’s 1964–2014-W Proof Kennedy 50th Anniversary gold half dollar is not the result of a frosting error, but likely a stain on the die or blank during striking, according to the Mint.

I spoke with you at the American Numismatic Association World’s Fair of Money about my gold Kennedy half dollar that I thought was an error.

I walked around and showed a lot of people at the show; most of them think it’s a frosting error caused by the laser they use to give certain areas of the coin a frosted look.

Somehow the laser got onto the field of the coin. I have attached two pictures that the folks at Dino-Lite took for me.

Some people at the show also think it could of been some type of foreign object that got onto the blank while it was being stamped.

Do I possibly have something rare and valuable here or is this common?

Upon the receipt of the images accompanying your Aug. 13 email request, Coin World forwarded the images and text of the inquiry to the United States Mint’s Office of Corporate Communications.

The inquiry and attached images were subsequently forwarded to the production and technical staff at the West Point Mint for investigation, according to Adam Stump, deputy director of the United States Mint’s Office of Corporate Communications.

Stump replied to Coin World on Aug. 15 with an explanation:

“We have checked out dies for first and last struck coins for the 2014 50th Anniversary Kennedy Half-Dollar Gold Proof Coin.

“We have not found any problems with the dies. There may have been a stain from oil on the die or the blank during the striking process.

“We consider this is a quality issue, not an error. Normally the customer would return the coin for a replacement.”

The face of each die is periodically cleaned to remove any grime or debris built up from repeated strikes. Dies are also periodically treated with a coating of light oil to increase lubricity and permit the struck coins to be properly ejected and not become stuck to either the obverse or reverse die.

Mike Diamond, Coin World’s Collectors’ Clearinghouse columnist, examined the images submitted by the reader, and concurred with the Mint:

“The bright patch lacks the matte finish of an area accidentally frosted by a laser. It’s boundaries are also too irregular. So it would appear that a little bit of foreign matter adhered to the die face, arrived with the planchet, or otherwise intruded between the planchet and the die. Certainly a small, thin patch of oil or grime would be consistent with the lack of any apparent recess,” he said.