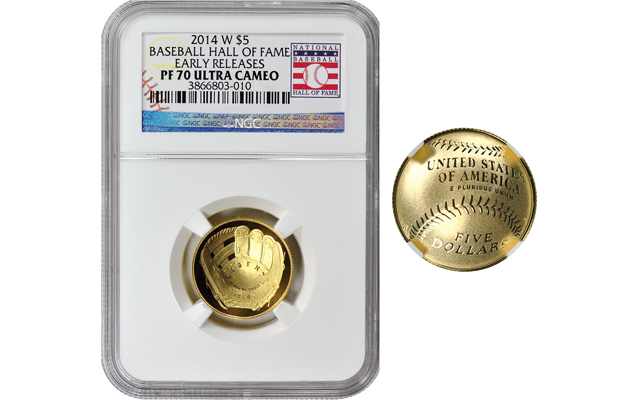 After the frenzy of the first few months, prices for these have settled down. Here’s a look at the $5 half eagle in the marketplace.

Within the month, the secondary market for uncertified examples quickly rose to $750 per coin, with a PCGS Proof 70 Deep Cameo “First Pitch” example selling for $5,000 in an April 1 eBay auction.

As the Mint ships its final coins to buyers, the market for these gold coins has settled down with dealers offering $600 to $650 for uncertified Proof examples, with Uncirculated examples at $100 less.

The prices for certified examples have largely cooled off as well. In a July 27 GreatCollections.com auction one graded NGC Proof 70 Ultra Cameo, Early Release, brought $760.10. Several months ago these were trading for more than $1,000.

As reference, roughly two-thirds of the nearly 1,000 “First Strike” examples that PCGS has graded of the Proof $5 coin have been graded Proof 70 Deep Cameo, a sign that these coins were well-produced and packaged carefully.