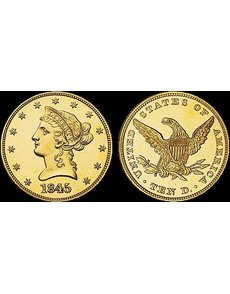 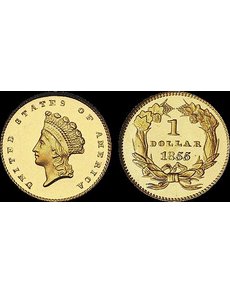 The Tacasyl Collection’s Proof 1855 Indian Head, Small Head gold dollar is one of, if not the finest, Proof pieces known for the issue. It brought $397,800 in the Sept. 23 auction. 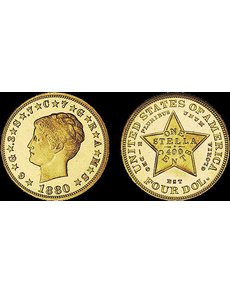 At $2,574,000 this 1880 Coiled Hair Stella gold $4 pattern is now one of the top 10 most expensive rare coins ever sold at public auction. The $4 Stella patterns were struck to test a possible international coinage and all are Proof pieces. 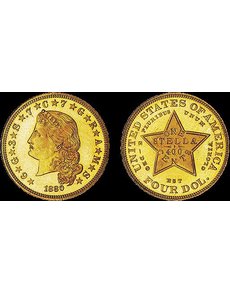 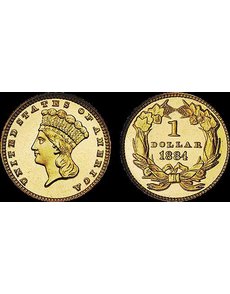 At $29,250 this 1884 Indian Head gold dollar was the “cheapest” of the 27 coins in the Tacasyl Collection. The gold dollar sold for less this time around than it did during its last two auction appearances in 1005 and 2006. 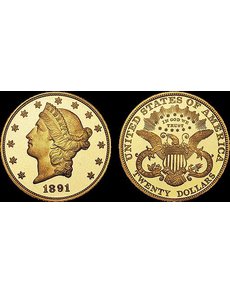 Gold expert David Akers called the Proof 68 Star Ultra Cameo 1891 Coronet double eagle from the Tacasyl Collection the “Finest Proof $20 ever seen” and it is the finest graded of the entire type. It set a record at $655,200. 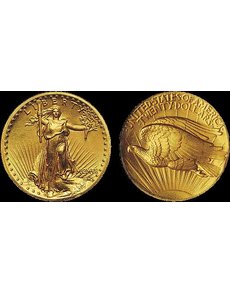 At $537,300, the collection’s Proof 69 1907 Saint-Gaudens, High Relief double eagle narrowly improved on the $534,750 that it realized when offered as part of Heritage Auctions’ sale of the Philip H. Morse Collection in 2005.
Previous
Next

However, the auction in itself represented a record. The firm noted in a post-sale press release, “The astounding $399,186 lot average represents a world record for a rare coin collection on a per lot basis (nearly doubling the previous record).” Prices quoted in this article include a 17 percent buyer’s fee.

The collection represented a complete gold Proof type set of types from 1834 to 1915.

Paul Song, Bonhams’ director for coins and medals, told Coin World on March 22 that Tacasyl is an acronym formed from initials of the collection’s consignor and his family.

Only the very best

The collection was assembled by an individual from a family of distinguished collectors “with the clear-eyed intention of purchasing only the very best,” according to Bonhams.

In its catalog the firm stressed the desirability and importance of Proof gold coins, comparing them to works of art. The introduction wrote that the collection presented “nearly a century’s worth of artistic development as illustrated on the finest ‘canvas’ at the command of the United States Mint: the Proof coin.” It added, “That, combined with the softness of gold and the extremely delicate surfaces of all proof coins, made nearly perfectly preserved examples objects of the utmost rarity.”

The coins in the Tacasyl Collection were graded by Numismatic Guaranty Corp. The catalog noted that in 2007 the collector had NGC reholder the coins with inserts noting the Tacasyl pedigree.

Topping the sale were four Stella gold $4 patterns that together brought nearly $5 million. The group has been called the finest and most perfectly matched set of $4 Stellas ever assembled.

The coin in the auction is considered the finest of approximately 10 that are known today and the catalog entry noted that “the 1880 Coiled Hair Stella has long been thought of as the ‘great white whale’ of the four coin series.”

The record-setting coin, cataloged as Judd 1660 in United States Pattern Coins, Experimental & Trial Pieces by J. Hewitt Judd, edited by Q. David Bowers, last crossed the auction block Jan. 12, 2005. At the time it was housed in an NGC Proof 66 Cameo holder and when it sold for $977,500 in Heritage Auctions’ sale of the Gold Rush Collection, it established the then-record for the highest price paid at auction for any of the 1879 and 1880 Coiled Hair and Flowing Hair Stellas. When offered at a 1972 Stack’s auction it brought “just” $35,000.

The $4 Stella patterns were struck to test a possible international coinage and all are Proof pieces. The gold versions were likely struck on shaved $5 half eagle planchet stock. That results in the striated surfaces that characterize most Stellas.

The two 1836 coins were the only gold issues struck by the U.S. Mint that year, with circulation and Proof strikes produced for each denomination. Six 1836 quarter eagles and four 1836 half eagles are known to exist in Proof, according to Bonhams. Bonhams adds that both of the coins were once part of a complete eight-piece 1836 Proof set that had been owned since the date of issue and allegedly sold to a private collector for a reported $1 million prior to August 2000.

The firm stated that the three coins together represent the finest 1845 gold Proof set obtainable, as like with the 1836 set in the collection, each of the coins is individually the finest known. The description added: “Proof coins of this early date, particularly in gold, have been called ‘Master coins’ and were not produced for sale to the general public as in later years. Although specific documents relating to the production of the special issues are lost (or, at least have yet to be located in the National Archives) it is almost certain that they were produced exclusively for some official presentation or commemorative purpose.”

The least expensive coin offered in the Tacasyl Collection was an 1884 Indian Head, Large Head gold dollar in Proof 68 Cameo that sold for $29,250. Interestingly, the coin sold for less this time around than it did during its last two auction appearances. At Heritage’s Jan. 5, 2006, Florida United Numismatists auction it brought $32,200 and previously at Stack’s 70th Anniversary sale on Oct. 19, 2005, it realized $29,900.

The Indian Head, Small Head design is often referred to as a Type II gold dollar and the type was struck from just 1854 to 1856. Just a dozen or so Proofs are known for the entire type.

When the coin in the Tacasyl auction was offered as part of Bowers and Ruddy’s sale of the Louis E. Eliasberg Collection in October 1982, it brought $62,700. The same piece later was offered in a Superior Galleries 1992 auction where it sold for $148,500.

Immediately after the Bonhams auction Song said that the sale was one of the highlights of his career and added, “The fact that probably more than 75% of the sale was bought directly by collectors is testament to the phenomenal nature of the collection. The sale proved beyond a shadow of a doubt that superb quality and great rarity are a magical mix.” ¦