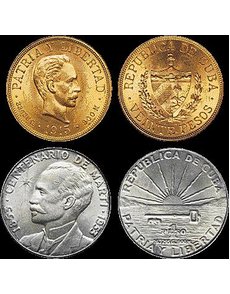 While the Cuban 1915 gold 20-peso and 1953 silver peso shown are legal to buy and sell in the United States despite sanctions against the island nation, such coins are being banned by eBay from its online auctions.

Online auction venue eBay is banning the sale of Cuban coins, paper money and stamps under revisions of its policies governing its online auctions.

Imposition of the ban has enraged collectors of Cuban numismatic and philatelic items, noted by comments from collectors on eBay’s own discussion forum at http://forums.ebay.com/db1/topic/Coins-Paper-Money/Ebay-Banning-Cuban/5100147869.

The ban has also brought terse remarks from Francis X. Putrow, president of the Cuban Numismatic Association (www.cubannumismaticasso
ciation.com/) who says the ban is adversely affecting collector-sellers of such material.

Putrow informed Coin World the “unmerited rejection” of Cuban collectibles has been in effect since April 9.

“It became effective without any advance warning or notification to the hundreds of sellers of Cuban coins, currency and stamps, as well as other Cuban collectibles,” according to Putrow. Putrow said eBay customer service representatives refer callers to Web pages at pages.ebay.com/help/poli
cies/embargo.html that explain that “eBay’s policy prohibits the sale of most items that originate from Cuba due to the sanctions enforced by the U.S. Department of the Treasury’s Office of Foreign Assets Control (OFAC). Any violation of this policy, we will remove the item and may prohibit you from future use of our services.’ ”

“There is no logical reason why eBay has initiated a revised policy other than the inability to ‘tag’ the listings of embargoed and non-embargoed items,” Putrow said.

The embargo was enacted subsequent to Cuba’s nationalizing the properties of U.S. citizens and corporations in Cuba.

The embargo, strengthened to a near-total embargo on Feb. 7, 1962, was codified into law in 1993 as the Cuban Democracy Act.

The act’s stated purpose was to maintain sanctions on Cuba until the Cuban government moves toward “democratization and greater respect for human rights.”

“eBay is committed to maintaining the highest industry standards and our policies are designed to promote a safe and trusted marketplace that complies with U.S. trade laws and regulations.

“eBay’s Embargoed Goods policy prohibits the sale of items that fall under U.S. embargo regulations. As a U.S.-based company, this policy applies to all items sold on eBay.

“We are updating the policy to clarify that eBay does not permit goods from embargoed countries that claim to be pre-embargo, since we cannot determine or verify when an item was removed from a specific country. Specifically, listings for stamps, coins or paper money from Cuba are not permitted.”

Ramirez concluded the statement by noting that “Eileen Chamberlain Donahoe is not employed by eBay and has had no involvement with this policy.” Donahoe is U.S. ambassador to the United Nations Human Rights Council and the wife of eBay’s chief executive officer, John Donahoe.

The pages.ebay.com/help/poli
cies/embargo.html online link includes the following explanation: “Under U.S. law, buying and selling items made in restricted countries may not be lawful, depending on the nature of the item, when it was manufactured, and when it left that specific country.

“Generally, items from restricted countries may be sold only if they’re considered to be informational, pre-embargo, or licensed.”

Collectors of Cuban numismatic and philatelic items designate their collectibles as First Republic, representing collectibles from 1902 to 1962, Putrow said.

The Second Republic designation refers to all collectibles from 1962 to the present.

The Philadelphia Mint minted its last Cuban coin in 1961 — a 5-centavo piece.

The U.S. Treasury Department Resource Center website at www.treasury.gov/resource-center/sanctions/programs/pages/cuba.aspx provides guidelines and policies regarding Cuba and other countries against which embargoes are in place by the United States.

“The specific details on Cuba are vague because they do not address the exceptions that have been published since February 7, 1962,” Putrow said.

The exceptions, which are well documented, were also included in eBay’s Guide to Collecting Cuban Coins at www.ebay.com/gds/Your-Guide-to-Collecting-Cuban-Coins/1223/g.html, but the link was severed on April 20, Putrow said.

According to Putrow, before the website link was removed, the pages contained the following language: “LEGALLY PURCHASING CUBAN COINS — Acquiring almost anything from Cuba is illegal for U.S. citizens and permanent residents. However, there are some exceptions. Only items that are licensed, informational, or precede the embargo can be purchased from Cuba. While coins are not licensed or informational, coins minted before the embargo was in place can be legally sold and purchased in the United States. Purchasing any coins minted after 1963 can result in heavy fines.” ¦