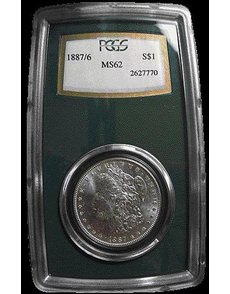 This 1887/6 Morgan silver dollar is in a Professional Coin Grading Service Regency holder. The holder, distributed in a cloth drawstring pouch, was a short-lived idea that was not enthusiastically received by collectors, according to PCGS founder David Hall.

Early in 2012 Numismatic Guarantee Corp. announced it would reintroduce a retro “Black Slab” for special coin series, to commemorate its 25th Anniversary.

The original Black Slabs might more accurately be called “Green Slabs” because it takes a lot of greenbacks to buy the 1987 model holder.

Some estimate that only 35 to 200 of these original NGC holders survive, which when sold often bring much more than the coins encased within are worth.

That NGC announcement got me thinking about another holder that actually was green, and more distinct than the “Black Slab” —the large Regency holder offered in the mid-1990s by Professional Coin Grading Service.

Regency holders measure about 5 inches by 3 inches in the middle, narrowing at the top and bottom. The slab came with an emerald green drawstring pouch bearing the PCGS gold logo.

The label was large enough to add a few lines of a coin’s provenance or even designate the coin as a gift to a special friend.

By some count, more than 360 Regency Holders bore the provenance of actor-comedian Danny Kaye who, coincidentally, passed away 25 years ago in 1987.

When I first beheld the Regency Holder, I wanted one for my collection.

Problem was, I couldn’t find any for sale locally or in coin shows. Ones on eBay were ridiculously high-priced, often hundreds more than retail prices of the encased coins. Then an 1887/6 Morgan dollar graded Mint State 62 appeared in an auction conducted by Weaver Signature Coin and Currency in Missouri. I bid over the $450 retail and won!

When I received the Regency holder, I took a photo of the coin, uploaded the photo to my PCGS Set Registry and later placed my Morgan dollar in a bank box. I always recommend to home hobbyists that they use set registries to view their coins online while keeping the coins safe at a local bank.

Later at home, I wondered whether PCGS might offer the Regency holder in retro, like NGC did the Black Slab. So I wrote to PCGS founder David Hall, inquiring whether the company had any plans for “a retro Regency.”

In Hall’s reply, he said the “Regency holder was a short-lived idea that was not enthusiastically received. People called them ‘coffins,’ and we didn’t get many requests for them, so we stopped doing them.”

When I look at my PCGS Regency holder online, I don’t see an unpopular product. I see the history of a company that continuously experiments to find the right combination of attractiveness, utility and security in its holders.