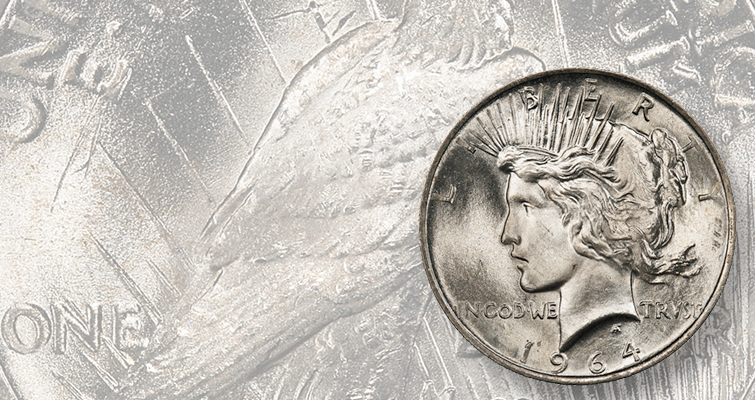 PCGS produced this new artist’s concept of what a 1964-D Peace dollar might look like, if one survives. The grading service is offering a $10,000 reward for an opportunity to examine a coin that Treasury Department officials say is illegal to own.

Professional Coin Grading Service officials are hoping that someone in the collecting community holds a genuine 1964-D Peace dollar, and the firm is willing to pay a $10,000 reward just for the opportunity to examine one of the legendary trial strikes from 1965.

PCGS officials announced the reward on Jan. 11 during the grading service’s luncheon at the Florida United Numismatists convention in Orlando.

Treasury Department officials ruled in May 1973 that the 1964-D Peace dollar is illegal to own. No examples of the coin have ever been authenticated, though rumors persist of some pieces surviving in the collector marketplace.

Also during the luncheon, PCGS revealed the PCGS Top 100 Modern U.S. Coins rankings. The 1964-D Peace dollar rests in the No. 1 spot in the rankings even though no confirmed examples of the trial strikes exist, not even in the National Numismatic Collection of the Smithsonian Institution.

Bureau of the Mint officials claim to have melted all 316,076 examples of the 1964-D Peace dollars after a program to resume silver dollar production was abandoned in 1965. If any pieces were to have escaped melting and entered the collector marketplace, the silver dollars are subject to confiscation by the Treasury Department. United States Mint officials hold the position that none of the silver dollars was ever officially released and thus all remain government property.

PCGS officials will consider the legal issues involved with examining an example of the coin, according to the firm.

“PCGS has not checked with legal counsel, but of course we would before doing anything, as we did with the 1974 Aluminum cent. Our view is that the 1964-D Peace dollar, if it exists, is one of the most important coins of the 20th Century, and a treasure for the numismatic community. If one does surface, and if there are no legal issues with us viewing the coin, we are confident our experts would be capable of authenticating the coin,” said David Hall, president of Collectors Universe, parent company of PCGS.

PCGS has authenticated and graded a 1974 Lincoln aluminum cent, a trial strike that Treasury officials also deem illegal for private ownership, though at least one is known to be in private hands.

If PCGS officials were to be afforded an opportunity to examine a purported 1964-D Peace dollar, the grading service would presumably face at least one hurdle: no diagnostics from a previously authenticated example.

PCGS authenticators could compare an example to Peace dollars of earlier dates. However, the Philadelphia Mint was forced to prepare new obverse, reverse and collar dies for the coins. According to Roger Burdette in A Guide Book of Peace Dollars, existing stocks of reverse and collar dies from the 1930s, when Peace dollars had been last struck, were unsuitable for use.

Burdette also notes that all hubs and master dies for Peace dollars were destroyed in 1937. Burdette said on Jan. 9 that the Philadelphia Mint “still had the original 1921 obverse cast,” though this would have been of the high relief version of the coin, issued in 1921 (a lower relief version was used from 1922 to 1935). “I have not been able to learn anything about the new 1922 models and casts that [Peace dollar designer Anthony] deFrancisci made in low relief. Gilroy Roberts [the Mint’s chief engraver in 1965] might have used the 1921 obverse in some way, but I found nothing stating that,” Burdette said Jan. 9.

Burdette writes in his book that because of the lack of old hubs and dies, “it is likely that 1964 Peace dollar details differed noticeably from low-relief varieties of the 1920s and 1930s.” (History would seem to support Burdette’s conclusions on design differences. Collectors of Morgan dollars are well aware that the 1921 examples of that coin differ considerably in detail from those last struck in 1904, due to a need to produce all-new models for the new Morgan dollars.)

Questions to PCGS officials by Coin World about what diagnostics could be used in any possible authentication of a 1964-D Peace dollar were unanswered as of press deadline Jan. 11.

The 1964-D Peace dollars were struck from May 13 to 24, 1965, in part to replenish dwindling supplies of 1935 and earlier silver dollars held in Treasury Department vaults. For several months in 1965, as the news media covered the production of the silver dollars and government debate surrounding the coins, the coin collecting community eagerly anticipated the release of the first silver dollars struck since 1935. Coin dealers even began publishing advertisements offering to buy the silver dollars at prices well above their face value.

However, production of the silver dollars began at the approximate same time that the government was also discussing removing most or all silver from the nation’s coinage. The final decisions made regarding the role of silver in circulating coinage, and Bureau of the Mint objections to possible dealer/collector speculation in the silver dollars, led the government to stop production of the 1964-D Peace dollars.

Eva Adams, the Mint director at the time, said the 316,076 1964-D dollars that had been struck were classified as trial strikes and all were melted, notes PCGS.

However, rumors persist that examples survive, though no 1964-D Peace dollar has ever been displayed openly.

One persistent rumor states that Denver Mint employees were offered the opportunity to acquire examples of the silver dollars at face value, a decision that if true, could have enabled examples to have entered the collector marketplace.

Surviving employees who were present during the production of the coins have different recollections about whether the coins were offered to Denver Mint employees for purchase.

Michael P. Lantz, a die setter trainee, Coin Press, Branch, Coining Division, at the Denver Mint in May 1965, contends that no such sales occurred. Lantz made that claim in an article published in the Sept. 16, 1996, issue of Coin World.

Mint Director Adams, quoted in an interview published in the May 21, 1975, issue of Coin World dedicated solely to the 1964-D Peace dollar production, said she was unaware of any missing examples.

In the interview, Adams said all steps were followed to ensure that no 1964-D Peace dollars escaped the confines of the Denver Mint.

“At no time when I was there was there any neglect in maintaining this system, at least no instance which ever came to my attention,” Adams said in the interview. “No pieces were ever reported missing.”

However, numismatist Thomas K. DeLorey wrote in a July 15, 1996, Coin World Guest Commentary that he once spoke with prominent Denver coin dealer Dan Brown, who claimed he had been told by a senior Mint official that Denver Mint employees each had been afforded the opportunity to two examples of the coins on the first day of production in May 1965. According to DeLorey, the Mint official told Brown that on the second day of production, Denver Mint employees were ordered to return the coins they had purchased, and that most workers complied with the order.

DeLorey states that he later related Brown’s story to a former Denver Mint employee working in the weighing room, who DeLorey says confirmed Brown’s account. According to DeLorey, the employee he spoke with claimed that a fellow Denver Mint worker, when ordered by officials to return his coins, indicated that he had spent his two 1964-D Peace dollars at a Denver bar.

Other rumors persist, with Burdette noting in his book on Peace dollars that “a number of notable collectors and dealers [claim] to have seen or been offered examples.”

The chapter on 1964-D Peace dollars in Burdette’s book provides a detailed accounting of when, where and how the trial strikes held at various Bureau of the Mint facilities were destroyed. However, Burdette does not discount the possibility that examples could have escaped destruction.

About the PCGS reward

Don Willis, president of PCGS, a division of Collectors Universe Inc., stated in a press release that 1964-D Peace dollars “have achieved legendary status with rumors and speculation over the decades that some examples may have survived. PCGS now is offering a $10,000 cash reward just to view in person and verify a genuine 1964-D Peace dollar.”

Hall, who is also co-founder of PCGS, said: “It sometimes takes years for famous coins to surface. Until 1920, no one knew there actually were 1913 Liberty Head nickels in existence. Until 1962, no one knew the 1804 Draped Bust silver dollar and the other coins in the special presentation set given by the United States to the King of Siam in 1836 were still in existence. ...

“Perhaps this new reward offer will help solve the mystery of whether any 1964-D Peace dollars survived the melting pots. It’s the number one modern U.S. coin,” Hall explained.

The creation of the PCGS Top 100 Modern U.S. Coins listing underscores the growing popularity of coins struck since 1965, according to the grading service.

“Modern coins continue to increase in popularity and are a rapidly growing part of PCGS submissions. There are numerous types of collections of modern coins as evidenced by the thousands of modern coin sets in the PCGS Set Registry,” Willis said.

The complete list of 100 as ranked by PCGS experts and other consultants is available online at www.PCGS.com/top100.

The top five in the PCGS Top 100 Modern U.S. Coins list are:

(1) 1964-D Peace dollar: “The most controversial and one of the most famous of all modern issues,” according to Ron Guth, president of PCGS CoinFacts.

(3) 1974 Lincoln aluminum cent: 1.57 million were minted but only two are known. One is graded PCGS Mint State 62 and believed to be in private hands. Another example resides in the National Numismatic Collection at the Smithsonian Institution.