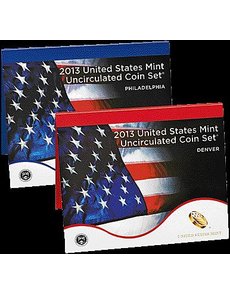 New packaging is being introduced by the U.S. Mint for the 2013 Uncirculated Mint set, which contains 14 coins apiece from the Denver Mint and Philadelphia Mint.

The 2013 Uncirculated Mint set was scheduled to go on sale by the U.S. Mint beginning at noon Eastern Daylight Time June 4.

Packaging for the annual set includes two folders separating the coins of each facility, each with a certificate of authenticity printed on the packaging.

New packaging is being introduced for the 2013 set.

The 14 coins from each facility are:

? One Kennedy half dollar.

Orders for the set may be placed at the Mint’s online catalog at www/usmint.gov/catalog, and by telephone at 800-872-6467.

All domestic orders will be assessed a shipping and handling fee of $4.95 per order. ¦