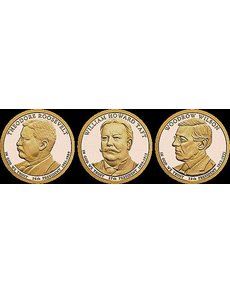 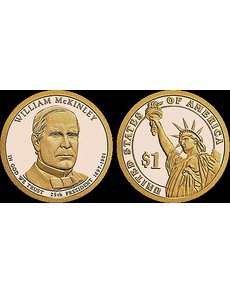 United States Mint officials have released images of the Proof versions of the 2013 Presidential dollars.

The dollar coins struck at the Denver and Philadelphia Mints in circulation quality are being offered at numismatic premiums above face value in 25-coin rolls, 100-coin bags, and in 250- and 500-coin boxes. The same coins are also included in First Day Coin Covers.

Presidential dollar coin production for circulation was suspended Dec. 13, 2011, by Treasury Secretary Timothy F. Geithner because of a glut of the coins in Federal Reserve Bank storage facilities. Circulation-quality production since then is reserved strictly for numismatic sales.

The dollar coins are also being struck at Denver and Philadelphia in Uncirculated quality for inclusion in the annual Uncirculated Mint set and other multiple-coin sets.

The Proof versions of the dollars, struck at the San Francisco Mint, are included in the annual Proof set and Silver Proof set, as well as in additional multicoin products.

Everhart also designed and sculptured the Statue of Liberty reverse common to all Presidential dollars.