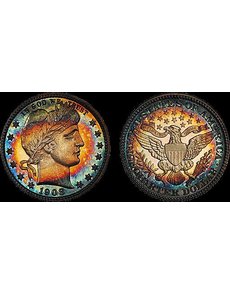 The Legend-Morphy coin auctions are typically well-edited productions with a limited number of lots: this one featured just 375.

Collectors are willing to pay substantial premiums for richly colorful coins, and many of the silver coins offered in the auction had spectacular toning.

One of the most attractive was a 1908 Barber quarter dollar graded PCGS Proof 65+ with a green Certified Acceptance sticker that sold for $7,475. The rich color was described as follows: “Both sides are circled by thick rings of navy/blue/forest green/violet that open into lighter silvery white centers.”