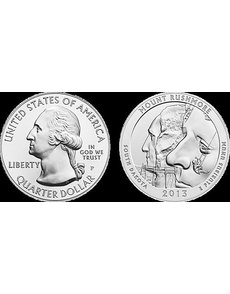 After greeting the hobby with a flurry at the start of 2011, the America the Beautiful 5-ounce silver quarter dollars, or “hockey pucks” as some call them, have been a slow build with collectors.

The first 2010 issues — released into the market in the first days of 2011 — were met with huge collector excitement that diminished as silver became more expensive. In today’s market, with silver at reasonable levels of around $20 an ounce, these big coins are becoming more affordable — and popular — with collectors.

The last of the five 2013-P 5-ounce Uncirculated collector versions to register a sellout of its authorized mintage of 25,000 was the Mount Rushmore (South Dakota) National Memorial coin and its last sale price was $154.95. These are already enjoying a healthy secondary market with examples in original Mint packaging selling at the $200 level in online auctions.

The bullion version of the Mount Rushmore 5-ounce coin is available at the $125 to $135 level in the secondary market, as evidenced by current “buy it now” eBay auctions.

These price levels are consistent for all five of the collector and bullion versions of the 2013 America the Beautiful 5-ounce coins.

A huge winner in the America the Beautiful 5-ounce series is the 2012 Hawai`i Volcanoes National Park coin. The Uncirculated version was a quick sellout from the U.S. Mint and was introduced on Sept. 24, 2012, with an issue price of $204.94. Today, Uncirculated examples in original Mint packaging can sell for $600 to $675 in online auctions, and bullion examples regularly bring $375 to $400. ¦