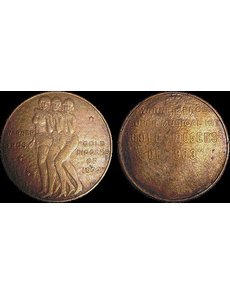 Token was probably used to promote the Warner Brothers movie Gold Diggers of 1933. Similar pieces are known with the names of specific movie theaters used in the inscriptions.

I have a token for the Warner Brothers movie Gold Diggers of 1933. I am curious as to how were these used? Were they used for tickets, passed out on the street, or something else?

The illustrated token refers to the movie Gold Diggers of 1933 based on the play Gold Diggers that was on Broadway for 282 performances during 1919 and 1920.

To coin collectors, the musical number “We’re in the Money” is probably the most recognizable song. This opened up the movie and featured a line of chorus girls dressed in gold coins. Ginger Rogers was one of the female performers.

The obverse of this token design includes three chorus girls, three stars, and the text WARNER BROS. and GOLD DIGGERS OF 1933.

It appears that this token was used as a promotional or advertisement piece for the movie.

Other examples are noted with names of different movie theaters struck on the reverse, below a line rule, with the text WARNER BROS. SUPER MUSICAL HIT “GOLD DIGGERS OF 1933” found above.

An example from the Granada Theatre in The Dalles, Ore., was listed at www.tokencatalog.com.

Other examples are noted with the names of the “Bradford Theatre” and the “Stanley Theatre.” Each of these theaters was affiliated with Warner Brothers Pictures.

Because of the different theater names, it is quite possible they were used as a promotional piece to get viewers to the theater.

Perhaps a Coin World reader might be able to provide additional background for this token.

I recently found a Massachusetts state quarter dollar that seems to have the outer clad layer of the coin missing on the reverse. The obverse with George Washington appears to be normal.

If the coin is lacking one of the two outer copper-nickel clad layers, then it should weigh less than a normal quarter (approximately 5.67 grams). One missing a clad layer might weigh 4.7 grams or so.

State quarters with missing clad layers are very collectible. Collectors especially prize those pieces on which the state side is lacking the clad layer. If your coin can be certified as one of these errors, it is a very nice find possibly worth several hundred dollars.