Collecting from the year 1837 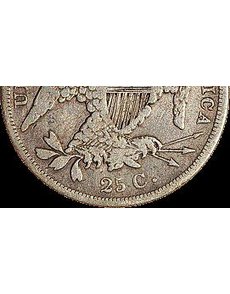 The 1837 Capped Bust quarter dollar, Browning 6 variety, known by just one to three examples, is an obstacle for completing a die marriage set for 1837. The B-6 variety is identified by the small uppermost arrowhead.

Many collectors lament that by the end of a particular series of coins, it seems to no longer have anything of interest in the way of die marriages. Not entirely true. Take 1837 as an example.

The Capped Bust half dimes and dimes were in their final year of production and the Capped Bust quarter dollar would hold out for another year before giving way to the new Seated Liberty design.

The 1837 half dime has five die marriages featuring Small and Large Denominations. The “famous” Small Denomination is a Rarity 3 die marriage (201 to 500 known), but commands a premium beyond its rarity because it is the only Small Denomination marriage for the year. In addition, it is a listed Red Book variety (A Guide Book of United States Coins by R.S. Yeoman). The other four marriages have a large 5C and are represented by two Rarity 1 marriages (more than 1,000 known), a Rarity 5 marriage (31 to 80 known) and the Rarity 6 (13 to 30 known) Logan-McCloskey 3 die marriage (Federal Half Dimes 1792-1837 by Russell Logan and John McCloskey).

The dime series is represented by four die marriages for the year, none of which is particularly rare.

The John Reich 1 (Early United States Dimes 1796-1837 by David J. Davis, Russell J. Logan, Allen F. Lovejoy, John W. McCloskey, and William L. Subjack) is the scarcest of the four with a Rarity 4 designation (81 to 200 known). It is, however, rare in Mint State. The JR-4 variety is a very common marriage, but has an interesting bisecting die crack on the obverse. Completing a marriage set of the dimes is only moderately challenging.

The quarter dollar series is another story. It has six die marriages including an R-5 and an R8 (one to three known). Both of these die marriages are easy to attribute on sight. The scarce Browning 5 (Early Quarter Dollars of the United States 1796-1838 by A.W. Browning), an R-5, is identifiable by the stem over 25C extending clearly past the end of the C. The Rarity 8 B-6 marriage is identified by the small uppermost arrowhead. It is much smaller and thinner than any other found in 1837. Any collector will be well challenged to complete an 1837 quarter dollar die marriage set.

The half dollar series is represented by the Capped Bust, Reeded Edge halves. The Mint began using the new stronger steam press to hub the dies for the half dollars. This left little hand working for the final product, which makes identification of the specific dies more difficult.