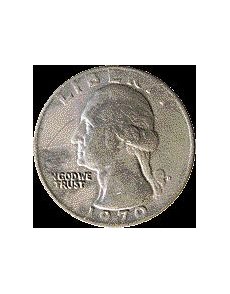 This 1970-D Washington quarter dollar was struck on dime stock. It weighs 4.24 grams. 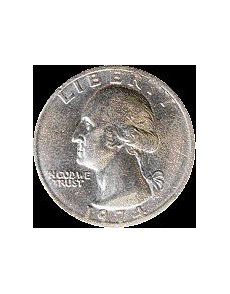 Struck on a planchet punched out of rolled-thin stock, this 1974 Washington quarter dollar weighs 4.92 grams. 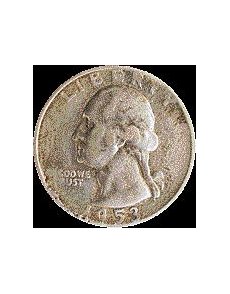 Often mischaracterized as being struck on silver dime stock, coins like this rolled-thin 1953-S Washington quarter dollar are inevitably too heavy. This specimen weighs 5.11 grams. 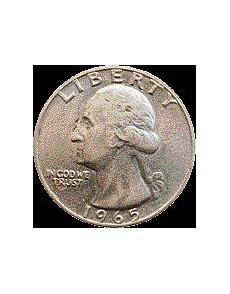 Weighing in at 7.0 grams, this 1965 Washington quarter dollar was struck on rolled-thick stock rather than being struck on stock intended for another denomination.
Previous
Next

A “wrong stock” error is a coin struck on a planchet of the correct diameter but punched out of coin metal strip intended for another denomination.

Shown here is a 1970-D Washington quarter dollar struck on dime stock. It weighs 4.24 grams. While dime stock quarter dollars can be found in many years between 1965 and 1992, the 1970-D coin is by far the most common date-and-Mint combination.
Our next coin, a 1974 Washington quarter dollar, was also struck on an abnormally thin planchet. But at 4.92 grams, it is too heavy for dime stock. It’s a “rolled-thin” error. It was struck on a planchet derived from copper-nickel clad quarter dollar strip that was rolled too thin.
Weight is critical in distinguishing wrong stock errors from rolled-thin and rolled-thick errors. And yet many collectors, dealers and grading services pay only occasional attention to this all-important component. Over the years I’ve encountered a prodigious number of abnormally thin or thick coins that were incorrectly labeled as “wrong stock.”
Because of the high frequency of misdiagnosis, every collector should learn how to calculate the expected weight of a suspected wrong stock error. The calculation is simple and requires only basic algebra and geometry.
The general equation is written as follows:
weight of normal coin from suspected stock =   expected weight (X)
area of normal coin from suspected stock      area of your error coin
The area of a circle is calculated using the formula πr2, or pi times the square of the radius. The radius is half of the diameter. Coin diameters are found in many basic references and on the U.S. Mint website (www.usmint.gov/about_the_mint/?action=coin_specifications). The value of pi is 3.14.It is not necessary to calculate the volume of each planchet, as thickness is a constant. For a quarter dollar struck on dime stock, the equation would be:
weight of dime  =  expected weight of dime stock quarter (X)
area of dime                       area of quarter dollar
OR
2.27 grams             =                   X
3.14 × (17.91 mm ÷ 2)2            3.14 × (24.26 mm ÷ 2)2
Simplifying the denominator, the equation becomes:
2.27 grams       =              X
251.8 square mm         462 square mm
Now cross multiply, to get: 251.8X = 1048.74.
Divide 1048.74 by 251.8.
X = 4.16 grams, the expected weight of a copper-nickel clad dime stock quarter.
The weight of the actual coin may deviate up to 0.15 gram from the expected weight. Deviations greater than 0.2 gram in either direction probably mean you’ve got a rolled-thin error instead of a wrong stock error.
Coins such as this 1953-S Washington quarter dollar are frequently misidentified as having been struck on dime stock. It weighs 5.11 grams. It is one of many thin quarter dollars produced by the San Francisco Mint between 1951 and 1954. A silver dime stock quarter should weigh around 4.59 grams, but these coins all fall between 4.9 and 5.4 grams.
In addition to weight, it is important to pay attention to other features including composition and signs of uneven thickness. For example, I have seen many encapsulated Kennedy half dollars from the years 1965 to 1969 labeled as “quarter stock” or “quarter thickness stock.” Besides being too heavy, their composition is all wrong. Quarter dollars from this period have a copper-nickel clad composition while half dollars have a silver-copper clad composition. All of the “quarter stock” half dollars that I’ve inspected, and that others have inspected on my behalf, have a normal silver-copper clad composition.
A similar misdiagnosis was applied to the abnormally heavy 1965 quarter dollar shown here. Weighing a hefty 7 grams (normal is 5.67 grams), it was labeled as having been struck on “50c stock.” I have seen other heavy quarter dollars from this year similarly labeled. And yet, instead of having the silver-copper clad composition of half dollars from this period, it has the copper-nickel clad composition of a normal quarter dollar. This is simply a rolled-thick error. While the weight approximates that of a quarter dollar struck on copper-nickel clad half dollar stock, it is probably coincidental.
Error dealer Jon Sullivan recently acquired three thick 1965 quarter dollars whose weights were 6.53 grams, 6.83 grams and 6.91 grams. Two of the coins were struck by the same die pair. The variability suggests that a roller was improperly adjusted and that the distance between the rollers was fluctuating.
Wrong stock errors are best collected in their raw state. Many purported wrong stock errors that are encapsulated have no weight printed on the label. And even if a weight is included, there’s no guarantee that it has been accurately recorded.