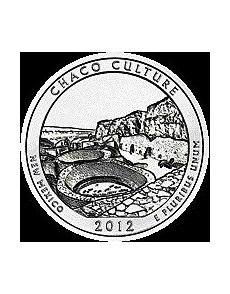 Bags and rolls of circulation-quality 2012-S Chaco Culture National Historical Park quarter dollars are being offered by the U.S. Mint in 100-coin bags and 40-coin rolls at numismatic premiums above face value, with none of the coins scheduled to enter circulation.

Bags and rolls of circulation-quality 2012-S Chaco Culture National Historical Park quarter dollars struck at the San Francisco Mint with the S Mint mark are scheduled to go on sale at noon Eastern Daylight Time July 12 from the U.S. Mint.

Although struck in circulation quality, the coins being struck at the San Francisco Mint are reserved for numismatic sales, with none for distribution into circulation by the Federal Reserve.

The current San Francisco Mint celebrated its 75th anniversary earlier in 2012, which prompted the U.S. Mint to issue the 2012-S coins in recognition of the event. Mint officials have not revealed whether additional San Francisco Mint coins will be offered in future years as the America the Beautiful program progresses.

All domestic orders will be assessed a shipping and handling fee of $4.95.

The obverse features a portrait of President George Washington.

The United States Mint launched the America the Beautiful Quarters Program in 2010. It is a 12-year initiative with 56 quarter dollars featuring reverse designs depicting national parks and other national sites in the 50 states, the District of Columbia and the five U.S. territories.

Under this 12-year program, the Mint will issue five new quarter dollar designs each year, with one final design in 2021. ¦