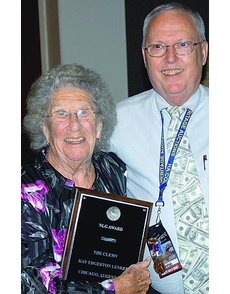 Kay Edgerton Lenker was presented the Numismatic Literary Guild’s highest honor, the Clemy, at the culmination of the NLG’s annual bash and awards event Aug. 18 during the American Numismatic Association World’s Fair of Money held in Rosemont, Ill.

Lenker has served the NLG as treasurer for the past 26 years. A retired U.S. Navy captain and meteorologist, she has collected coins for 56 years, specializing in numismatic items that tell stories. Her collections include primitive moneys and trade items, and coins of the United States, Japan, Austria and Russia. She has also served as a governor of the ANA, general chair of the 1983 ANA convention in San Diego, and as a leader in a number of California numismatic organizations, often serving as editor of club publications. During the past 43 years she has won many awards as a competitive exhibitor at the state, regional and national levels, and became a certified exhibit judge in 1976.

American Numismatic Society Executive Director Ute Wartenberg Kagan won the James L. Miller Memorial Award for the best numismatic article to appear in any medium, “The Fight of the U.S. Secret Service Against Counterfeit Money,” published in the ANS Magazine.

Joshua Illingworth won the Clement F. Bailey Memorial Award for excellence among new writers in numismatics whose first published writings appeared in hobby publications during the previous year. His work was published in the ANS Magazine.

Ed Reiter, executive director of the NLG for the past 21 years, was presented the the Ribbet Award for his good humor and service to the organization.

Writing awards and categories include:

Book of the Year — The work having the greatest potential impact on numismatics: The Secret History of the First U.S. Mint, by Joel J. Orosz and Leonard D. Augsburger.

Extraordinary Merit: “Alexander-Type Tetradrachms in the Names of His Successors,” Walter C. Holt, The Celator.